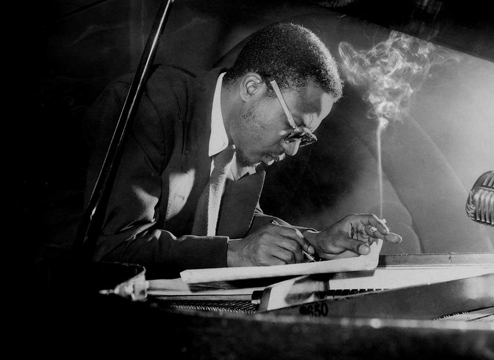 In 1951, the Studebaker Starlight Coupe was the most popular car, Quo Vadis was the biggest film at the box office and Thelonious Monk made the best album of the year.

As discussed in the Top 10 Albums of 1950, the “album format” as we know it today had yet to gain traction, which is why these Colin’s Review Best Of lists from 1950 – 54 are only limited to ten selections (as opposed to the customary Top 25). This also explains why these lists contain such diverse and eclectic selections. For instance, I can assure you that there never has and never will be another year in which three country albums make the Top 10.

Does this mean that 1951 was a golden year for country music? Sure, something like that. Even though the genre isn’t my usual cup of tea, I can’t deny greatness when I hear it. The albums by Hank Williams (#4) and Les Paul & Mary Ford (#2) are two of the genre’s all-time masterpieces, while the inclusion of Lefty Frizzell (a generous #10) is more attributable to the genius of Jimmie Rodgers.

Nevertheless, every LP from 1951 is overshadowed by Thelonious Monk’s Genius of Modern Music Vol. 1, which also bears the distinction of being the decade’s first A-Plus recording. Monk (along with Miles Davis, whose debut clocks in at #9) would go on to become one of the decade’s greatest visionaries. An even bigger distinction: Genius isn’t even his greatest work (although “Epistrophy” definitely is his greatest song).

This is easy-going country — folk mixed with cracker blues combined with pop. Lefty Frizzell, who would go on to become one of the first modern country superstars, owes a good deal of his legacy to Jimmie Rodgers, the original country superstar. Continue reading…

The debut of 25-year-old, heroin-addled trumpeter Miles Davis feels watered down and, for lack of a better word, “safe.” No daring in the arrangements or the soloing — just pure, unabated jazz. Nevertheless, the talent (Sonny Rollins, Art Blakey, Jackie McClean and Davis himself) trumps the tripe: a historically important record. The New Sounds only seems inferior when compared to Davis’ impossibly high standards.

8. Ritual of the Savage

Building on his success with Yma Sumac, Les Baxter returned to familiar territory to conduct exotic-sounding jazz standards. Though the music is exotic in name only, its catchy appeal cannot be denied — South American sounds that are safe for white suburban consumption.

Buddy Rich on drums, Nat King Cole on piano and the legendary Lester Young on tenor sax. Quite a trio, and quite an album too. The music is relaxing and nostalgic and never overstays its welcome. Rich’s drumming is magnificently understated, but the real treat here is the interplay between Young and Cole. Their harmonies are divine.

The Lester Young Trio is one of the few jazz albums in which I wouldn’t mind vocal accompaniment. Cole should’ve sang on this one.

The ideas behind the music are far more rewarding than the sounds produced, which is never a good sign. Nevertheless, the “City of Glass” suite is one of the most overt avant-garde recordings in jazz history. Stan Kenton’s most famous work is harsh and dissonant, influenced by Charles Ives, Elliot Carter and Alban Berg. Continue reading…

Masterpieces by Ellington is one of my favorite albums of the ‘50s.  It is something that can be listened to at any time — the rare Instant Cheer-Up record. Continue reading…

Hank Williams’ debut contains the purest distillation of country music ever produced — Robert Johnson blues for white folks. Put these eight songs on repeat, and you’ll find that country music has never been so consistent in the 75 years since their inception. Continue reading…

This is cool jazz at its coolest — you almost expect Miles Davis to swoon in with a lonely trumpet. But the emphasis is solely on pianist Wynton Kelly himself, who leads the way with minimal backing accompaniment. A timeless record. Continue reading…

Country in name only, this vastly underrated LP is a sublime combination of rock ‘n’ roll, dream pop and jazzy improvisation. Les Paul’s place in music history hasn’t been forgotten, but his innovative sounds unfortunately have.

Paul’s guitar playing is cerebral, but the vocal melodies of spouse Mary Ford are what truly make this record timeless. Whether rave-up (“In the Good Old Summer Time”) or slow-moving ballad (“The Lonesome Road”), Ford’s voice has a stunning sense of control only equalled by her husband’s pioneering fretwork.

Originally recorded in 1947, these eight songs bristle with innovation and discovery. Each measure finds Thelonious Monk inventing something new — from the jittery rhythms of “Misterioso” to the angular melodies of “Thelonious,” this is music that eerily foretells the shape of jazz to come.

Simply put, Genius of Modern Music, Vol 1 is one of the greatest artistic achievements of the decade. Even simpler: “Epistrophy” is the most important jazz song of all time.