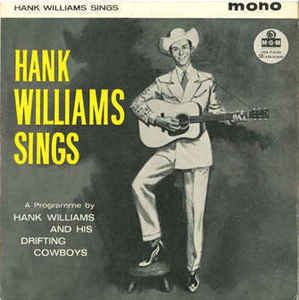 “Lost Highway” is a spellbinding blend of downtrodden melodies and steel guitars—a blue-collar American anthem that applies to most, if not all. At the very least, if you’re listenin’ to Hank Williams it’s because you’re listenin’ for a reason: you’ve felt these lyrics at some point in your life. “I’m a rollin’ stone all alone and lost/For a life of sin I have paid the cost/When I pass by all the people say/Just another guy on the lost highway.”

Hank Williams’ debut contains the purest distillation of country music ever produced—Robert Johnson blues for white folks. Culled from recording sessions dating back to 1946, this early LP is as timeless as Hank’s voice is relatable: he speaks for everyman, and the music hails from anytime.

Put these eight tunes on repeat — not a bad one in the bunch. Either it will give you a newfound appreciation for country music, or it will have you cursing out all country music that has been made ever since.