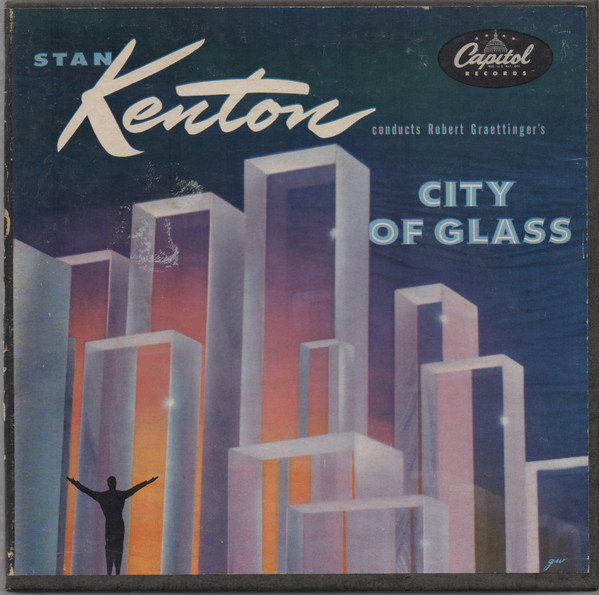 This is big band Alban Berg, nothing more and nothing less. With dashes of Charles Ives and, gasp, Elliot Carter thrown in for good measure. This is far from jazz, and even further from big band. Kenton’s 1950 LP, Innovations in Modern Music, was a bit more fun, you could say. City of Glass—a classical suite in four movements—is harsh and dissonant, with only traces of bop and/or swing. If it wasn’t for the horns and occasional drums, this would fit right in with Second Viennese School dogma.

That’s not to say City of Glass isn’t good and/or groundbreaking. Considering the time (early 1950s…) and place (…in Hollywood, CA…) and context (…when modernist jazz was still in its infantile stages), this music is decades ahead of its time. However, the polyphonic atonality and jarring chromaticism is often difficult to parse.

The ideas behind the music are far more rewarding than the sounds produced, which is never a good sign—academia gone wrong. Nevertheless, the “City of Glass” suite is one of the most overt avant-garde recordings in jazz history. The fact that it comes so (relatively) early in jazz history makes all the difference.

Might I suggest the 16-track, hour-long City of Glass compilation, which features all of the Kenton/Robert Graettinger recording sessions? It gives a sharper look into this unique collaboration, while also including several of the Orchestra’s best tunes (“Thermopylae,” “Incident in Jazz,” “Everything Happens to Me”). A far more worthy investment.