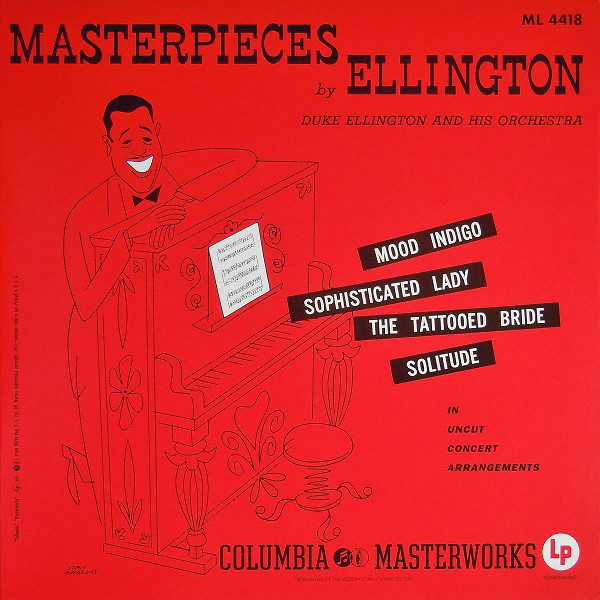 Several legendary musicians — among them, Duke Ellington, Robert Johnson and Coleman Hawkins — were in their primes well before the concept and technology of the “album” had been defined. As a result, their legacies have gone somewhat undervalued. Or, rather, we don’t hear all that much about them.

For what its worth, Masterpieces by Ellington might as well be the first actual “album,” at least as far as I’m concerned. One of the first 12″ LPs, the aptly-titled recording consists of four lengthy standards, allowing plenty of room for relaxed and inspired soloing

The 15-minute version of “Mood Indigo” might be the best rendition of the eternal classic. The bumbling clarinet melody calls to mind a walk down a 1920s N.Y.C. street; its manner is calm and unhurried, without a care in the world. Meanwhile, Ellington’s piano provides the somber anchor on which the entire tune can rest. He leads his orchestra down several interesting avenues: muted trumpets, talking trombones and big band blasts.

The only thing that doesn’t work — on “Mood Indigo” and the rest of the album — are the occasional lead vocals, courtesy of Yvonne Lanauze.  Ms. Lanauze is a good singer, but she possesses a piercingly annoying affectation that is halfway between croon and caw. I have never been a strong proponent of vocal jazz, and this is no exception.  The musicianship is what makes this album so great — luckily the vocal breaks are few and far between.

The Duke reigned as king over the swing era, and there truly is nothing more beautiful than a slow, swinging ballad. Both “Sophisticated Lady” and “The Tattooed Bride” feature swaying big band arrangements that range from sitting on a park bench to jitterbugging on the dance floor. The songs find beauty in the quieter moments, clarinets and saxophones often leading the way down sunset sidewalks. And through it all, the master himself is there to remind us of his greatness, piano chords lifted straight from heaven.

When looking back on the 1950s, it is easy to focus on the LPs released post ‘55, which is when more traditional “albums” started to gain traction. Yet it is important not to overlook the first half of the decade, because you’ll most certainly be missing out.

Masterpieces by Ellington is one of my favorite albums of the ‘50s.  It is something that can be listened to at any time — the rare Instant Cheer-Up record. Ellington was already 50-years-old when this was recorded, and the syncopated brand of swing he invented was slowly going out of style. Yet Masterpieces is truly timeless.

Despite being the master of the 3-minute pop standard during his 1930s prime, Ellington was still able to cash in at the dawn of the album with a near-perfect collection of tunes.  It is as the title suggests, then, a masterpiece.