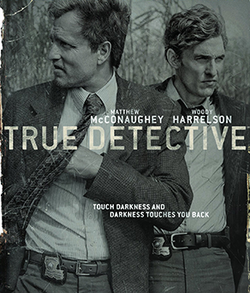 Prestige w/ pulp. Nic Pizzolatto’s masterpiece looked and felt (and very much was) like a daring work of art, but didn’t stray too far from the good-vs-bad, police-procedural blueprint that is so commonplace. Just look at the story’s main literary influences: Robert W. Chambers’ collection of avant-garde shorts, The King in Yellow, and postwar pulp magazines like, no shit, True Detective. And in terms of television: Sopranos meets Law & Order.

To see True Detective season one for the first time is indeed something special. Detractors may say that it is a fraud, an impostor, but the show becomes so engrossing as to make you believe that it is unlike anything before or since.

On rewatch, the captivating quality still holds up. There has never been a show with such a clear division of labor: Nic Pizzolatto writes, Cary Joji Fukunaga directs and Matthew McConaughey and Woody Harrelson star. Each brings his own distinct touch, which makes this very auteurist — but who is the auteur?

The setting plays a central role — the washed-up bayou towns of backwoods Louisiana. Perfect for a murder mystery concerning an occult secret society. It is all elegantly captured by Fukunaga’s skilled camerawork. The landscape — floodplains and lonely roads — takes on a persona of its own.

Fukunaga’s greatest achievement comes at the end of episode four, “Who Goes There,” a six-minute unbroken tracking shot that calls to mind Alfonso Cuaron’s work in Children of Men. Without a doubt, it is one of the most memorable scenes in TV history.

Another distinct feature is the 17-year timeline. With three key storylines taking place in 1995, 2002 and 2012, the investigation feels longer than one season, eight episodes. This is a debut that is wise beyond its years, more fully-formed than almost anything else out there, very postmodern.

That’s because True Detective is led by two movie stars who have no difficulty sliding right into a role. The duo of Matthew McConaughey and Woody Harrelson as Rust Cohle and Marty Hart is a pairing for the ages.

McConaughey is the biggest movie star to ever make the jump to television and, correlatively, Rust Cohle is one of the greatest characters in TV history. A classic antihero with a one-of-a-kind personality, Detective Cohle is McConaughey’s career-defining moment. But without Rust there is no Marty, and Harrelson’s work cannot be understated. The dynamic between the two is the driving force behind the entire show.

Even if you feel that True Detective didn’t live up to the hype, there is no questioning its influence. It was basically the first series to bring A-list movie stars to the small screen, while also jumpstarting the anthology format. It opened the doors for Big Little Lies, American Crime Story and Fargo, and helped to further elevate the role of creator/showrunner. Nic Pizzolatto became an HBO darling overnight.

Unfortunately, he lost his luster just as quick. Season two of True Detective was an unmitigated disaster of epic proportions. You have your whole life to craft a debut album, but roughly six months for the follow-up. The old adage was true.

The dark stain of season two has actually undermined the “untouchable” flair of season one. Flaws are magnified, lights less bright. Nevertheless, True Detective’s debut is a landmark in TV history.

It is one of the rare “great” shows that is not timeless — meaning, I have no clue how this will be looked on in ten years. I feel that it is like TV’s version of The Departed. There are people who believe that Scorsese’s Boston crime drama has lost some of its greatness in the years that have passed, yet there are those who still believe it is one of the director’s signature achievements of the 21st century.

For both The Departed and True Detective season one, I say: A+