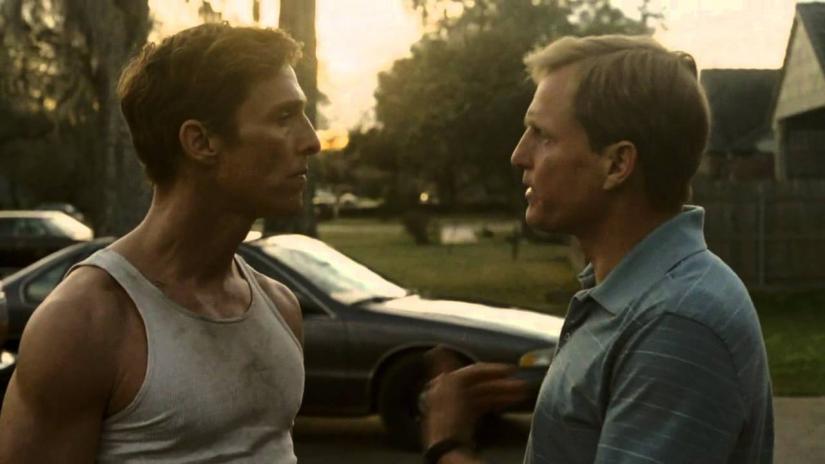 Rust Cohle is a bitter, bitter man. However fun it is to watch him spout off nihilist philosophies onscreen, it would definitely be a drag to be in the same room as him. It makes you feel for Marty Hart, who understandably hates his guts. And it makes you feel for Detectives Papania (Tory Kittles) and Gilbough (Michael Potts), who have been interrogating a 17-years-bitterer Rust for what seems like days.

Cohle’s overbearing negativity is starting to be just that: overbearing. Taking the fun right out of it. Even McConaughey’s signature Southern drawl is becoming a source of exasperation. Whatever happened to Alright alright alright?

“The Locked Room” features the least action of any episode in True Detective’s first season. The most authentic sequence is the first — a check-in with a revivalist troupe led by Pastor Joel Theriot. Rust denies that “old time religion,” but doesn’t deny that “a tall man with facial scarring” may be the suspect they are looking for. The problem, of course, will be finding him.

The focus on a distinct brand of Southernism — the Louisiana floodplains expertly captured by Fukunaga’s skillful camerawork — is what makes True Detective unique. Detractors will say that True Detective isn’t all that distinct from television shows past, yet the alluring setting is something that can’t be argued with. The same haunting aura pervaded Bad Lieutenant: Port of Call New Orleans and Beasts of the Southern Wild. Not that I’m making comparisons here.

But bayou mysticism is often foolproof.

The investigation leads the pair to an old “accidental drowning” case that seems all too familiar. They trace the path of young Rianne Olivier from a shantytown to Light of the Way Academy, a closed-down Christian school sponsored by Governor Tuttle. From there, they put out an APB on Rianne’s old boyfriend, Reggie Ledoux, a wanted felon.

Yet through it all, the checking-the-boxes prestige fare starts to drag just a bit — two antiheroes working in tandem, one nagging wife that has nothing better to do than complain, a masculine loss of identity and an even more masculine fear of women. I get that this is HBO, but we could seriously do without the sex scenes.

Luckily there are moments of humor to undercut the seriousness, like when Rust jabs at Marty: “People who are incapable of guilt usually do have a good time.”

Or Marty, to Rust: “Can you see Texas from up there on your high horse?”

But then there’s introspective monologues, like the final one, that either cut too close to pretension or are just the right amount of cynicism: “It was all the same dream, a dream that you had inside a locked room, a dream about being a person. And like a lot of dreams, there’s a monster at the end of it.”

Can you guess who said that one?

The cliffhanger once again betrays the investigation. It even betrays True Detective itself. Because, as Nic Pizzolatto will reveal when all is said and done, the investigation is not what is important after all. The show is about Rust and Marty.

The meth-cooking monster that is foreshadowed in the final frame is just a teaser to keep us watching — a promise of action on the horizon, something to cure us of Rust’s psychoanalytical mumblings.

That’s not even the Yellow King, by the way. This makes the cliffhanger a bit of a cheat. Believe it or not, we actually saw the Yellow King earlier in the episode, though it was very subtle. And that’s not a cheat — that’s Pizzolatto sticking to his guns: character relationships > plot.