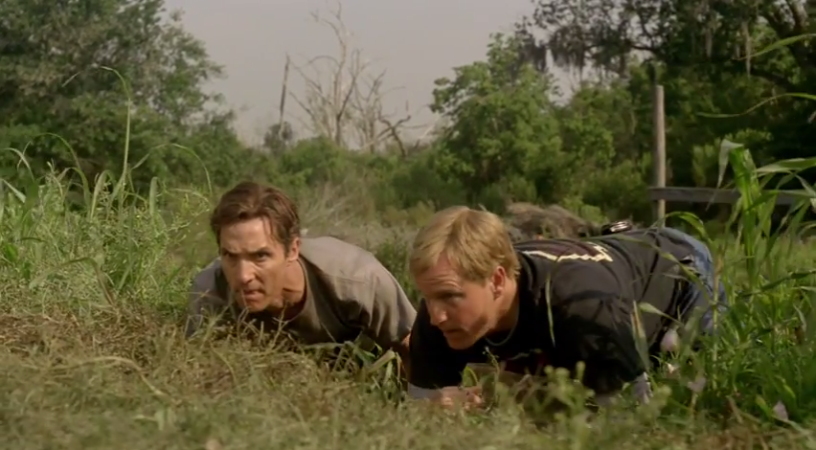 Time is a flat circle

Someone once told Rust Cohle that “time is a flat circle.” That someone was meth-addled child-abuser Reggie Ledoux back in 1995, mere moments before his death. Nevertheless, this cryptic statement has become a signature part of Rust’s philosophy all the way into 2012 — we are doomed to repeat our past mistakes over and over and over again.

“You’re trapped…like a nightmare you keep waking up into.”

Building on the explosive momentum carried over from “Who Goes There,” “The Secret Fate of All Life” returns to the familiar aura of eeriness that True Detective has made its specialty. However, the stakes now seem higher and the meditational tomes are deeper.

The “gunfight” at the Ledoux cookhouse doesn’t feel as finite as it should for Rust and Marty. And with good reason — Reggie and his brother Dewall are only cogs in the machine. They welcome death: “I saw you in my dream. You’re in Carcosa now. He sees you. You’ll do this again. Time is a flat circle.”

The investigation “solved,” Marty and Rust return home, honored as heroes. And so life goes on, or so it would seem — Marty and Maggie get back together, Rust starts dating, past crimes are forgotten, etc.

“The Secret Fate of All Life” benefits from moving seamlessly across three separate timelines: the “conclusion” of the investigation in 1995, the newfound facts of 2002 and the latest developments brought forth by Papania and Gilbough in 2012. Time is a flat circle indeed.

Years after the Dora Lange case, Rust has made a name for himself as a world-class extractor of confessions. If you want a murderer to divulge his crimes on record, then bring in Detective Cohle. He showcases this rare “talent,” coercing a PCP-popping yokel to cop to a double homicide.

Watching Rust go to work is a thing of beauty, but the mystery resounds when the murderer tries to strike a deal — he claims he knows about things: that Reggie Ledoux wasn’t the one who killed that girl with the antlers back in ’95, that people “high up” are involved, something about a Yellow King.

The cool, calm and collected Detective Cohle cracks. It’s something he’s always suspected, but never reopened due to the actions he had to cover concerning Ledoux’s death. He’s back on the case — time is a flat circle indeed.

Meanwhile, Marty finds his home life beginning to fracture once again, his rebellious teenage daughter causing him tremendous grief. An interesting theory: could his daughters have been somehow touched by the mysterious cult of the Yellow King? Even back in ’95, there were several subtle clues (the naked drawings, the sexual arrangement of the dolls) that may have hinted at something more. And now eldest daughter Audrey is taking part in threesomes — is it all a statement on Marty’s aggressive, woman-controlling masculinity, or is it a lead to Carcosa?

Cary Joji Fukunaga provides excellent imagery to show the eight-year passage of time. The tiara in the trees (once again: coming-of-age symbolism or latticework iconography?) is a hauntingly beautiful excerpt of innocence lost.

Now that Marty’s “good years” have slipped him by, his relationship with Cohle — who has him irked by reopening a closed case — is at another crossroads.

The interrogation sessions by Papania and Gilbough in 2012 finally get to the point: Cohle is the prime suspect in a new string of eerie murders, and is actually the overlooked suspect from the Dora Lange case back in ’95. Their reasoning: Cohle conveniently led the investigation, and Marty, wherever he wanted it to go, finding clues and uncovering dead ends that only he saw coming.

It’s a plot twist that finally turns the 2012 setting from a narrative framing device into True Detective‘s natural conclusion. Whatever the end point may be, it is going to finish with the long-haired, beer-drinking Rust as the main protagonist.

However, it’s hard to buy Papania and Gilbough’s accusations, even if you don’t know what comes next. There is absolutely NO WAY that Rust has been the occult murderer this whole time. Even Marty doesn’t buy it.

Rust is particularly offended. In a fantastic change-of-pace, he walks out of the interrogation, exiting the room he’s been in for five episodes and leaving the police station. The 2012 plotline has literally gained legs. Now we’re moving.

The episode’s ending basically disproves the Rust-is-the-killer theory. Nevertheless, it is a fantastic cliffhanger that works better than any the show has attempted thus far.

Rust returns to the abandoned Light of the Way Christian Academy in 2002, stumbling across a classroom full of twig latticeworks and dark imagery. The investigation is far from over.

After closing the book on 1995, True Detective has opened up tremendous momentum for 2002 and 2012. Not many shows feature three climaxes, especially within one season. Creator Nic Pizzolatto is really onto something here, repeatedly finding the sweet spot over and over and over again.

Time being a flat circle can be a positive thing as well.

True Detective S1E5: “The Secret Fate of All Life”