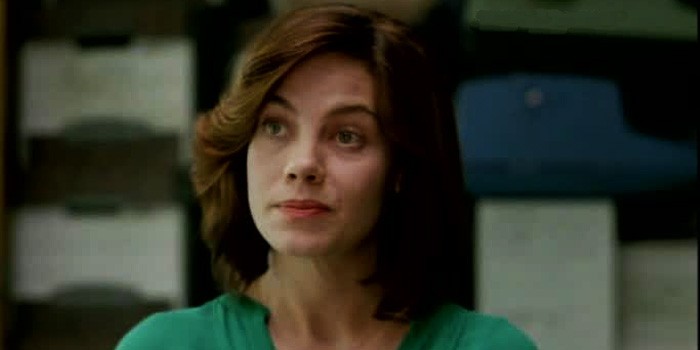 True Detective has now hit its stride, and “Haunted Houses” is another defining moment. Since this is an anthology series, each season has a certain sense of finality. That being said, this debut year is wise beyond its years. With the conclusion in sight, these last handful of episodes have taken on the urgency of Sopranos season 6 or Breaking Bad season 5 — a scorched-earth sprint to the finish that stands with the best of ‘em.

“Haunted Houses” closes the book on the past and opens up the door to the future…er, present…with the most satisfying cliffhanger ending yet. And by giving voice to one final unreliable narrator, the events surrounding Rust and Marty’s falling out in 2002 is placed under an intense microscope.

But in order to clear up just what went down in 2002, Papania and Gilbough call in Michelle Monaghan — Marty’s twice two-timed wife, Maggie — to give her side of the story.

Given the weak material to work with, Monaghan plays Maggie as strong as she can. But she’s been a stereotypical nag all season — Betty Draper, Skyler White and Marge Simpson Lite, but with 20 times less flair than what January Jones, Anna Gunn and Julie Kavner all respectively brought to the table.

Marty’s marital strife finally reaches a level of enjoyable watchability, and not because of the new pairs of boobies and buttcheeks making their way onscreen. No, the real reason is because Maggie finally strikes back at her inconsiderate husband in point-of-no-return fashion — she fucks Rust.

Rust and Maggie’s heat-of-the-moment liaison is the best (and quickest) fuck of the season. The scene is high-stakes and almost epic in scope — the doom-laden music greatly expanding upon the emotional intricacies.

Marty confronted Rust for mowing his lawn back in ’95. He reacts with unchecked vitriol when Rust “mows the lawn” again in ’02. Their fistfight in the parking lot is one of the highlights of the series — another mesmerizing point of no return.

Yet even before this incident, Rust and Marty’s partnership was gradually disintegrating. They were spending their days and nights acting independently of one another — Rust was following the Yellow King paper trail all the way up to Governor Tuttle and his cousin, Rev. Billy Lee; meanwhile, Marty was fucking ex-whores up the ass.

Every scene with Rust is a goldmine of dark entertainment. When he whittles a ghastly confession out of a mother who killed her children, it somehow takes an even bleaker turn — “The newspapers are gonna be tough on you. And prison is very, very hard on people who hurt kids. If you get the opportunity, you should kill yourself.”

Or, when Rust confesses to Marty the truth of their independently-codependent partnership: “…buddy, without me, there is no you. So type the fucking report, man.”

17 years later, and Rust and Marty are still independently-codependent. As Marty drives off from the sheriff’s station, he is tailed by a familiar red truck. It’s Rust, who says he has something Marty should come check out.

Rust’s tail-light is still broken from when Marty went crashing into it during their fight 10 years prior. Marty checks and loads his gun. Rust says he’ll buy him a drink.

“On second thought, you buy me a beer.”

The more things change, the more they stay the same.