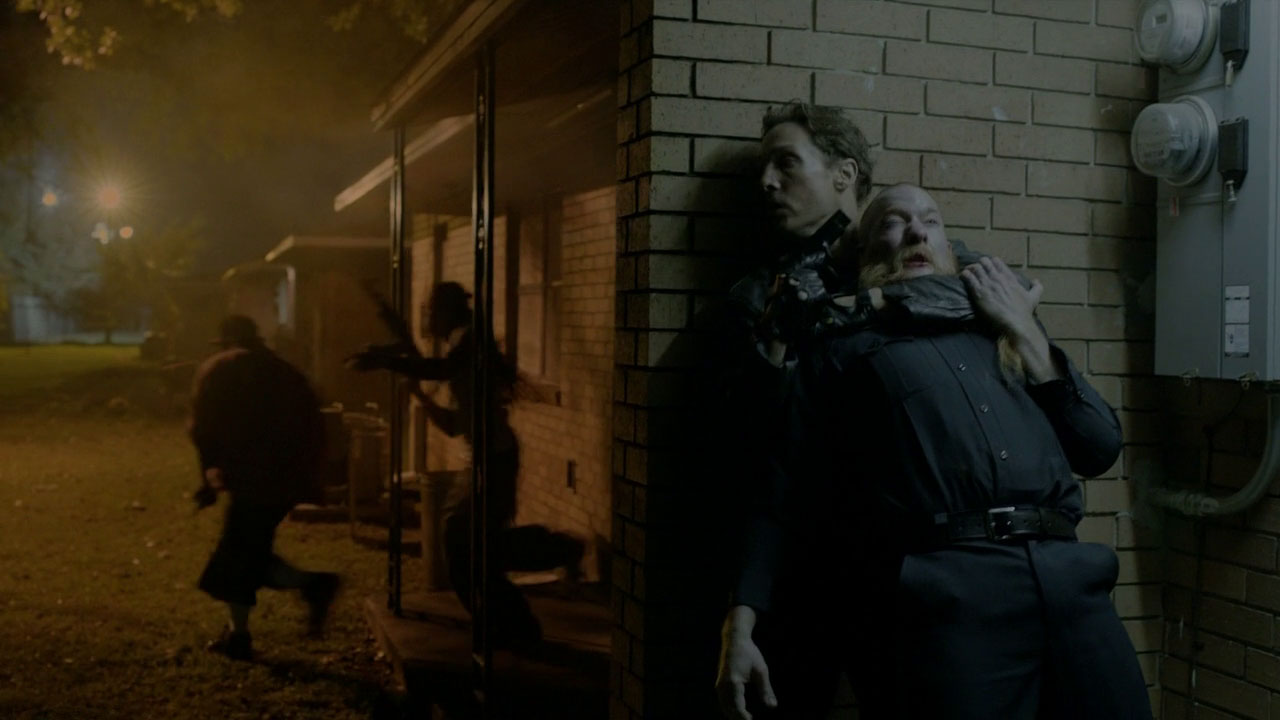 How did we get here?

For 56 minutes, Nic Pizzolatto and director Cary Joji Fukunaga set aside bayou mysticism and narcissistic chicanery in favor of outlaw carnage and coke-fueled hysteria. Not to mention Matthew McConaughey unleashed.

Sometimes, in order to be a true detective, you need to become a bad lieutenant. The transformation here is evident.

The final sequence is one of the greatest in TV history — more on that later. Yet it is the entirety of “Who Goes There” which transcends the True Detective formula.

Maggie realizes Marty’s infidelities and throws him out of the house, forcing him to move into Rust’s minimalist apartment. My main issue with the first three episodes has been the tired retread of Marty’s antiheroic marriage, even though it fits right in with the show’s statements on masculinity. With this plotline taking a necessary backseat, the episode is handed over to Rust, who absolutely owns the hour.

McConaughey has never been better. Even though the so-called crowning achievement of the McConaissance was his Oscar win, you’re more likely to remember the name of Rust Cohle as opposed to whatever character he played in Dallas Buyers Club.

In order to track down prime suspect Reggie Ledoux, the pair must somehow infiltrate the Iron Crusaders, a notorious group of outlaw bikers. Luckily, Rust was already a four-year “member” back in his deep-undercover narco days. He preps for his “return” by taking some “personal time.” But instead of visiting his “dying” “father” in “Alaska” like he tells the force (and Detectives Papania and Gilbough in 2012, also corroborated by Marty), he’s actually gearing up for the return of Crash, his long-forgotten Texas alias.

Hard drugs are always an alluring draw, especially for small-screen television. I can’t speak for everybody here but even before watching a single second of Breaking Bad, I was already hooked by the taboo, crystal-meth premise. Similarly, watching Rust snort coke and smoke crack doesn’t seem like much, but it’s a highly addicting scenario.

He was cool to begin with; he’s even “cooler” now. The mid-episode “training” montage is fantastic, featuring a perfect soundtrack choice in Lucinda Williams’ “Are You Alright?” It is here where the episode — and series itself — elevates itself, transcending all previous benchmarks.

Rust is a man who will solve the case by any means necessary. A true detective.

Aside from a few stray references to the Yellow King and Carcosa, “Who Goes There” abandons voodoo in favor of urban realism. Sure, some of it doesn’t make too much narrative sense — why exactly are they robbing a stash house in the projects? — but it is a necessarily explosive change of pace.

The final sequence is a six-minute unbroken tracking shot that follows the Iron Crusaders’ failed raid, filmed from Rust’s POV. It is one of the most tense, sustained stretches of greatness in — hear me out — TV history.

Nothing — not even The Sopranos, The Wire, Mad Men or Breaking Bad — had ever been so filmic, with such cinematic flair. The sequence calls to mind Alfonso Cuaron’s similarly ultralong one-takes in Children of Men. Cary Joji Fukunaga shows just how talented he is — maybe True Detective owes more to him rather than Pizzolatto.

But it isn’t just the skill that is on display — the artistry is what makes it. Drug-fueled but suddenly keenly aware, Rust moves through the white-vs-black gunfight with reckless abandon and calculated wit. The longer the scene goes — the more doors that are opened and closed — the higher the stakes become.

Sure, it feels like this scene was planned before the rest of the episode was written, but this is the pièce-de-resistance of True Detective, and one of the most “prestige” moments in TV postmodernity.

Here we are at the midwaypoint of True Detective’s first season, and a statement has been made. The statement: we don’t fuck around.

True Detective’s greatest asset, other than the acting performances, has been its reliance on a very specific setting. Even though Rust finds himself in the company of Deep South white supremacists, that setting is now completely abandoned.

Despite all this, “Who Goes There” excels. And then some.

From here, anything is possible.

True Detective S1E4: “Who Goes There”