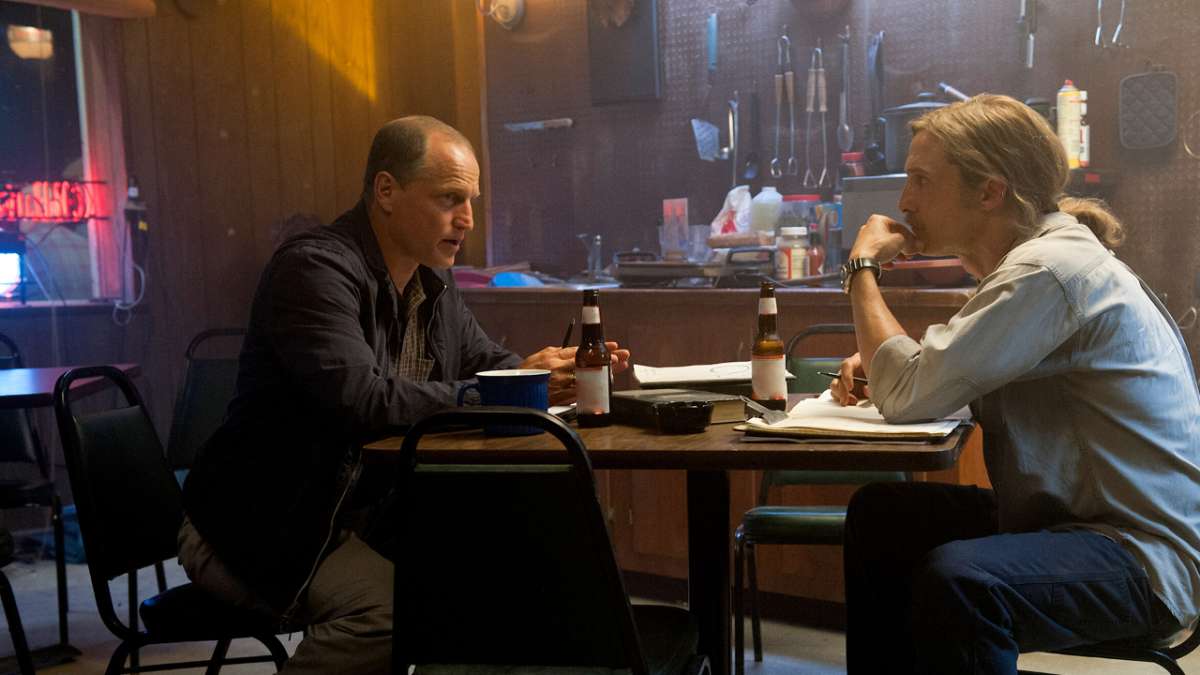 “Rejoice. Death is not the end.“

The penultimate episode of True Detective is perhaps the most plot-driven of the entire season. Which ain’t a bad thing at all. After six hours of (highly entertaining) philosophical meandering, it’s about time that the investigation kicked into high gear. And even though next week’s finale (“Form and Void”) proves that crime scene investigations are to True Detective what mob violence was to The Sopranos (i.e. not significant at all), it is still important to know that there is some semblance of an overall endgame.

Rust and Marty, reunited and still kicking it 10 years later, are finally figuring out “answers” to the decades-long Dora Lange mystery that has, for all intents and purposes, consumed much of their adult lives.

And, for all intents and purposes, Rust and Marty haven’t changed one iota since it all began.

But, y’know, that’s not entirely true: Marty has undergone a thorough reevaluation of his life. He’s now older and wiser, and also a bit friendlier and more understanding. In true True Detective fashion, he is less macho but more of a man.

The pivotal scene of “After You’ve Gone” is the subtle conversation between Marty and ex-ex-ex-wife Maggie, in which she asks if he is going to help ex-partner Rust. A perfectly-timed pause: “Yes.” “Why?” “Because I need to.”

A debt needs to be repaid — not to Rust but to the entire world. Or at least the Louisiana coastline, for starters.

This may be Woody Harrelson’s finest moment of the series, and certainly a turning point for Marty. Throughout seven episodes spanning 17 years, he has grown tremendously as a person — still flawed but now more forgiving; still an asshole but now more accepting.

In fact, this (not just the scene or the episode, but this entire season of True Detective) may be the greatest performance of Woody Harrelson’s career. He has always toed the line between character actor and blue-collar lead draw (White Men Can’t Jump, Natural Born Killers, Kingpin, A Prairie Home Companion and Zombieland, to name just a few) but the role of Martin Hart has provided him with the opportunity to showcase more depth than he ever has, film or otherwise.

Even though Matthew McConaughey has garnered the majority of critical acclaim, there really is no True Detective without Woody Harrelson. That’s because Rust needs Marty like creator/writer Nic Pizzolatto needs director Cary Joji Fukunaga — subverting the famous quote from last episode (“Without me there is no you”) on its head.

The case moves forward at a relatively rapid clip, yet “After You’ve Gone” is a very reflective episode. Usually I am wary of time jumps in a television series, but True Detective has perfectly woven 17 years of storylines into the fray that there is no need to worry of disjointedness. Likewise, Rust and Marty are given plenty of time to talk — reminiscing on the old days and where life has taken them since. It’s a beautiful thing to watch.

Not to mention that “After You’ve Gone” is probably one of the funnier True Detective episodes. It has a real getting-the-band-back-together feel, with Rust and Marty once again throwing subtle (“Life’s barely long enough to get good at one thing. So be careful what you get good at”) and not-so-subtle (“If you were drowning, I’d throw you a fucking barbell”) jabs at one another.

Time is a flat circle after all, and when we finally get our look at the “mastermind” killer at the end of the episode, he delivers a line full of all-knowing mysticism that seemingly steps outside of time: “My family’s been here a long, long time.”

Grippingly supernatural or rousingly anticlimactic, all (er…some) will be revealed in the season finale. This penultimate episode sets the stage very well, even though it feels like there is a lot that still needs to be wrapped up.