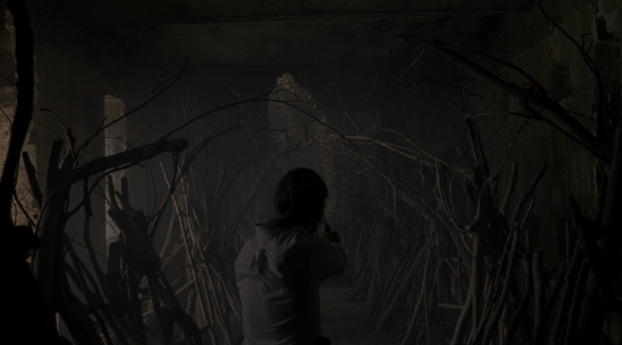 Look to the stars; the oldest story ever told

Clunky, anticlimactic and somewhat disappointing in the eyes of a True D diehard, but nonetheless close to perfection. “Form and Void” was not the finale we wanted, but was the finale we deserved, or at least the one that Nic Pizzolatto felt we needed.

The buildup to the Yellow King/Carcosa has been an Apocalypse Now-ish descent into hell — the alluring combination of occult symbolism and minimalist music has made this modern-day cult of Kurtz into a Southern Gothic Heart of Darkness. But the fact that the deranged killer — a supernaturalish savant by the name of Errol Childress — is a backwoods cretin who fucks (“makes flowers on”) his half-sister is somewhat of a half-assed sign of disrespect.

Art is ultimately in the hands of the creator, but it is better understood through the eye of the beholder. The first third of “Form and Void” introduces us to Mr. Childress, but I feel that providing “depth” to the “character” is both unnecessary and fruitless on Nic Pizzolatto’s part. We’re already at the end of the line — better to have him remain unknown than try to provide him with meaning.

He rapes and murders young kids — nothing more, nothing less. Errol Childress (and I call him that because it’s his name in the credits, though he is most often referred to—and remembered as—“our guy” or “the killer”) ultimately represents the evil that men do, but a supernatural Killer BOB or salient Buffalo Bill or seductive Norman Bates he is not.

He’s not even the Yellow King, or at least I don’t think he is.

“Form and Void” is oxymoronic — both a climax and anticlimax, stunning and heavy-handed, prestige and pulp. It is great but it is severely flawed, mostly in its lack of resolution. But the lack of resolution concerns itself with plot, when in actuality the true conclusion is reached by way of character development.

Rust can smell the psychosphere or sentient meat or whatever the fuck he wants to call it — the odor of death and dismay and pagan VHS snuff films. But to finally see the so-called psychosphere, be engulfed and live inside it, that is what True Detective has been building up to this entire time.

When we finally enter Carcosa, the episode — and even Errol Childress as a villain — turns it up a notch. His voice carries through the catacombs, and the supernatural quality that has been hinted at seemingly becomes a reality.

The showdown in the Carcosa crypt between Rust, Marty and “the bad guy” is the most tension-filled True Detective scene since the conclusion of “Who Goes There.” It is also one of the most memorable of TV 2014. The kicker — Rust looking up to the sky to see the cosmos spiraling toward him. Auditory hallucination or spectral unravelling of the great divide, whatever its meaning may or may not be, the imagery is stunning.

Childress nearly kills Rust and Marty, but is soon subdued by a well-timed bullet to the brain. A deus ex machina in the forms of Detectives Papania and Gilbough arrives to take our heroes to the hospital.

The anticlimax in the hospital contains the episode’s meat, which is not what fans of the show’s occult symbolism want to hear, though it is exactly as Pizzolatto intended. Rust, in a coma, takes on a Jesus Christ pose, and the Biblical symbolism becomes the dominant factor.

Similar to “Who Goes There,” this final act of “Form and Void” seems like part of a different show, almost to the point of being unrecognizable. Yet I got the same vibes from “Made in America” and “Person to Person,” so Pizzolatto must be doing something right.

The music begins to alter the mood, with minor chords and atonal counterpoint courtesy of T Bone Burnett making it hard to discern what exactly the show is trying to convey. The tracking shots of past locales — the Childress house, the abandoned church, the Dora Lange tree — shows a frozen-in-time “time is a flat circle” universe in which everything has remained unchanged.

And that is what True Detective’s greatest message is: not everything can be changed, or even fixed. The Tuttle family gets off scot free, while thousands of other rapists and abusers and murderers continue their crimes unchecked. The world is a terrible place, and the battle between good and evil will forever wage on.

Rust awakes from his coma a changed man, and suddenly pessimism turns to optimism for the first time in the True Detective universe. As the last two episodes proved, some things can be mended: the humanity of the soul.

Rust’s final speech outside the hospital is True Detective’s finest scene, and one of the greatest monologues in TV history. It makes all the clutter that came before worthwhile.

It’s a perfect conclusion to a tremendous artistic achievement, and you have to wonder who deserves the most credit for the overall greatness of True Detective season one: writer/creator Nic Pizzolatto, director Cary Joji Fukunaga or actor Matthew McConaughey.

It was ultimately (just) a Biblical story of black and white. Rust looks up at the stars: “Once there was only dark. You ask me, the light’s winning.” Iconic final lines that stand right up there with “Sorry, we’re closed” and “What year is this?”

And so, True Detective season one had no deeper meaning than good versus evil and the power of friendship (circular time and conservative masculinity notwithstanding). But that’s all it ever set out to be, despite its cynical philosophizing and occult political conspiracies.

It may not have broken new ground from an artistic standpoint, but it sure did a good job of making us believe it did.