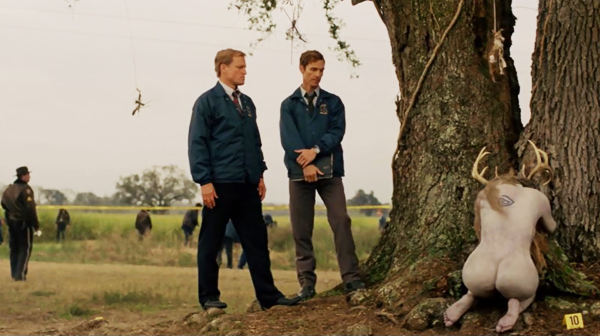 True Detective season one. Is it good? Is it great? Does it merely masquerade as prestige, pretending (and convincing us) to be something it is not? Not many shows had as much impact upon TV legitimacy as Nic Pizzolatto’s stylish 2014 crime thriller. It changed the game, but did it really? The camerawork, the mysticism, the A-list movie stars — something entirely different but nothing we haven’t seen before.

That’s how the True Detective debate goes. There are a variety of polarizing factors contributing to its brief run at the top of the cultural zeitgeist, and there are usually two stances to come down upon — it is either the greatest thing since sliced bread (The Wire being the equivalent of sliced bread), or it is just merely “meh.” The lackluster sophomore season had a hand in downplaying season one’s majesty, along with several other TV shows coming into their own immediately afterward (chief among them: Noah Hawley’s Fargo). Nevertheless, season one of True Detective is indeed something special. Take it for what it is: a highly entertaining police procedural that relies on über-masculinity and faux-spirituality, which actually makes for a captivating combo.

“The Long Bright Dark” is a perfect introduction to the True Detective experience. It isn’t the deepest episode of the series (every episode that follows will draw us further in), but it sets the tone by pulling no punches. More than anything, True Detective is a mood piece, and the mood is established through several recurring motifs.

A Coenesque emphasis on setting takes precedent. The rural bayou towns of southern Louisiana were heretofore unexplored — Cajun voodoo and Santeria in the air. All of this shines through in Cary Joji Fukunaga’s sophisticated directorial work, with special attention given to overhead shots of the rundown landscape. Meditational car-ride conversations are another favorite.

The music—foreboding, ominous and Southern Gothic, courtesy of T Bone Burnett—contributes greatly to the overwhelming pessimism. Perfect for a murder mystery that features elements of the occult bubbling just below the surface.

The structure, which jumps back in forth in time from 1995 to 2012, is postmodern in nature. Flashbacks and unreliable narrators create a unique procedural within a procedural. All will soon be revealed.

But the main draw of True Detective are the characters: Rust Cohle and Martin Hart, played by Matthew McConaughey and Woody Harrelson. Few shows have ever featured such an emphasis on two main protagonists — when all is boiled down, everyone except for Rust and Marty are just extras. Not to mention the fact that both actors give career-defining performances. Harrelson is “just a regular type dude with a big ass dick,” while McConaughey steals every scene he’s in. Even when Rust Cohle is offscreen, his intense presence is palpable.

The pace is slow in the first couple episodes, but it fits in with what Pizzolatto wants to say — about man, about violence, about the world itself. A true auteur, he and Fukunaga are the architects behind every single episode, every single shot. It was originally meant to be a novel. Take that for what you will.

“The Long Bright Dark” opens with dim shots of the murder and its aftermath — an unseen figure carrying a body, devilish fire distinguishing the nighttime, perhaps lending the episode its title. Then we are in 2012, an interrogation room. Retired detective Martin Hart is being questioned about the infamous murder case back in 1995. The same cops question an aged Rust Cohle about the same investigation in another room a few days later. Narration is mixed simultaneously. But it’s more than just a framing device. It seems that Rust himself is a suspect. This will come into play later.

As we are introduced to the crime scene (a ritual “crucifixion” of a naked woman in the middle of a field — tortured, branded and decorated with antlers, iconography and twig latticeworks), we are introduced to the characters. Marty plays it straight, or thinks he does. Typical Woody Harrelson. Cohle, on the other hand, is the antihero to end all antiheroes, spouting off pessimistic philosophies (“I think the honorable thing for our species to do is…stop reproducing”) and misanthropic ideologies (“I contemplate the moment in the garden; the idea of allowing your own crucifixion”). No surprise here — the two do not get along (“Let’s make the car a silent place of reflection from now on”).

True Detective came before McConaughey’s Lincoln ads turned him into an all-too-serious caricature. Here, the pretension is earned — Cohle’s world-weary sense of cynicism is mesmerizing. Whether you agree with him or not, you cannot turn away.

The murder investigation is addictive, but that is not what Pizzolatto wants out of True Detective. This point cannot be emphasized enough, especially when we reach the season finale. It is all about the characters — their flaws, their masculinity and their road to redemption.

We see connections between the ritual murder of 28-year-old prostitute Dora Lange and the five-year-old missing persons case of Marie Fontenot. References to churches, “kings” and “green-eared spaghetti monsters” all raise intrigue, but the real intrigue is the interaction between Marty and Rust. For a setting-the-stage pilot episode, “The Long Bright Dark” is particularly engrossing.

What it all boils down to is how much you respect Matthew McConaughey’s performance. The very fact that he made it a close call with Bryan Cranston (in Breaking Bad’s final season, nonetheless) for Best Actor at the 2014 Primetime Emmy Awards should tell you all you need to know. If you don’t place much stock in award shows anyways, see True Detective for yourself.