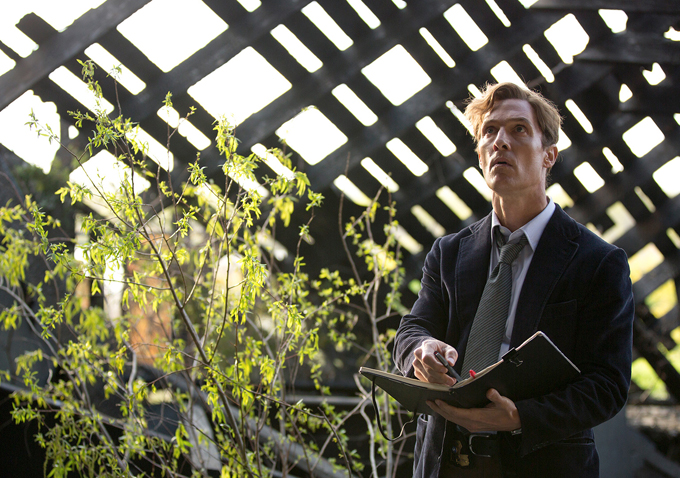 RUST COHLE (V.O.): “Days with nothing. That’s what it’s like when you work cases. Days like lost dogs…”

MARTY HART (V.O): “It goes on like that, you know the job. You’re looking for narrative. Interrogate witnesses. Parcel evidence. Establish a timeline. Build story. Day after day.”

The investigation goes on and goes on, long car rides and dead ends. You get to know your partner, you get to know the landscape. These are the dog days of True Detective—necessary steps to get to the next step.

“Seeing Things” isn’t boring but the burn is slow. At this point, the viewer wants the murder investigation to pick up. Dora Lange’s diary contains cryptic notes referring to “The Yellow King” and “Carcosa.” A church in the wild is another point of interest. Is it a Satanic cult or another tent revivalist charade?

These are all important questions, but it is not what True Detective and creator Nic Pizzolatto wants us to focus on. The relationship between Rust Cohle and Martin Hart is the main draw here—their strengths, their flaws and their interactions with the world and its inhabitants.

As their search leads them to a remote whorehouse, we begin to learn more about macho man Marty and renegade Rust. Marty, celebrated family man, is a guilty adulterer. His wife, Maggie (played by Michelle Monaghan), seems like she’s on to his infidelities. New no wrinkles to antihero w/ exasperated wife — a True Detective eye-roll.

Meanwhile, Rust is finding heretofore unexplored avenues of antiherodom. Psychologically tormented but with sneaky athleticism, and a twisted-yet-respectable sense of empathy. His past as a deep-undercover narco in Texas has left with him sensory damage — or keen sensory perception (“Sometimes I feel like I can smell the psychosphere”), depending on his narrative reliability. Cary Joji Fukunaga throws in a few tricks, showing Rust’s synesthetic hallucinations, an insomniac haunted by the death of his daughter and previous marriage.

A mutual respect is slowly beginning to develop between the two. That’s what eventually happens when you spend so much time with another person — you understand their ticks, their qualms, their ways of life. And if you’ve been reading my writings long enough, you know I’ll apologize for the regrettable alliteration a few paragraphs back.

The 1995/2012 setting is starting to feel naturalistic, with two separate stories both gaining traction. Even though “Seeing Things” is a piece-moving episode (another cliffhanger ending—the discovery of the abandoned church, featuring an occultist mural on the wall), it draws us further into the True Detective narrative.

Events yet unseen in 1995 (and 2003) are referenced in the interrogation rooms in 2012. This should hint that Pizzolatto doesn’t want to put too much stake into the plot. However, at this early stage in the game, the pursuit of answers is the main element driving our intrigue. The bingeworthy cliffhanger then is perhaps a betrayal to what this series is all about.

“Seeing Things,” indeed. As Rust Cohle would say: “Vision is meaning. Meaning is historical.” Or some shit like that.