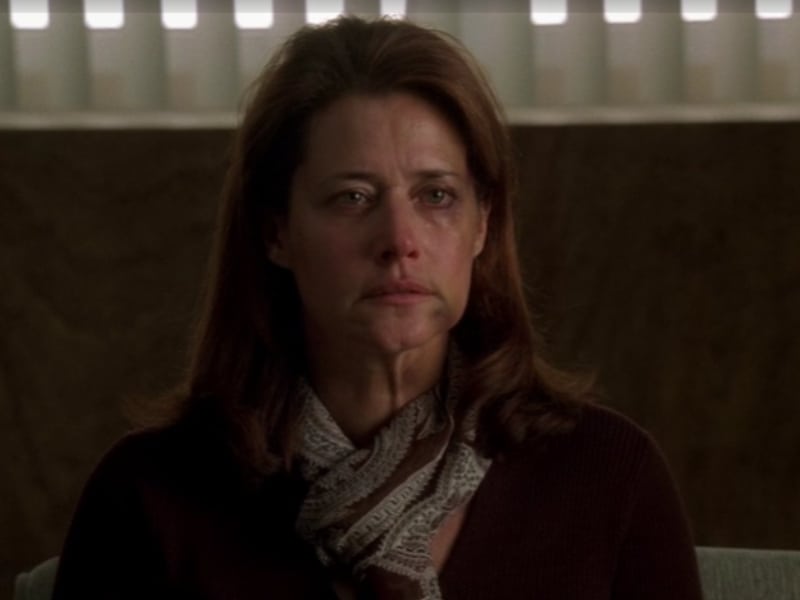 Employee of the Month: “Dr. Melfi’s Very Own Episode”

In only a few key scenes, “Employee of the Month” stakes its claim as one of the most emotional and painful episodes in The Sopranos canon. It isn’t perfect, and it’s somewhat problematic in today’s political climate, but it remains extremely powerful nonetheless.

The main character and storyline most closely associated with this episode is the rape of Dr. Jennifer Melfi. The scene in question is brutal, graphic and unshakeable. It was controversial back in 2001 and it’s even more controversial 20 years later, especially after shows like Game of Thrones have been so thoroughly criticized.

But The Sopranos isn’t Game of Thrones — nothing about this episode is unbowed, unbent or unbroken. Melfi’s storyline is handled with the proper levels of delicacy, intricacy and ethicality that it deserves.

The first 15-minutes of the episode stick to The Sopranos “nothing happens” aesthetic. Robin Green and Mitchell Burgess’ script casually sets up an obligatory, early-season Melfi spotlight. She argues with her “I’m tired of everyone assuming I’m a gangster because my last name ends in a vowel” husband, and attends therapy sessions with the un-idealistic Dr. Elliot Kupferberg. In her regular appointments with Tony, she floats the idea that he should be treated by a behavioral modification therapist instead. Tony is insulted, while Melfi hides guilt.

The rape scene itself is an unexpectedly violent twist. Even though it’s incredibly realistic, it’s something that shouldn’t happen to such a morally righteous character. As Dr. Melfi walks through the parking garage after work one night, she is suddenly attacked from behind. The assailant drags her to the stairwell and penetrates amidst screams of pain, every second as harrowing as it sounds.

I applaud actress Lorraine Bracco for her brave performance here. Very few actresses could pull this off so convincingly, so heartbreakingly. In truth, it’s such an unfortunately painful scene — John Patterson’s camera keeps the rapist’s bare, thrusting ass in frame for an excruciatingly long time.

And when it is finally over, how does it fit into The Sopranos universe? The entire episode plays out as a topical moral dilemma, which somewhat means the topic at hand is just a cruel plot device. Nevertheless, the storyline is defensible, in my opinion, because it is necessarily reprehensible. The static camera and uncomfortably dingy setting make this one of the most credibly realistic rape scenes in cinematic history, therefore providing an honest depiction of one of the most evil atrocities that can be committed.

After the incident, however, some of the storytelling gets a little sloppy. For example, the police officers detaining the prime suspect mishandle the chain of custody (or something like that), and he’s able to walk away a free man. It’s hardly believable. Even though this development doubles as a cynical commentary on the justice system, it seems particularly cruel and contrived.

Elsewhere, certain sections of the episode fall into the trappings of other Dr. Melfi storylines: an unnecessary focus on Italian-American nationalism. It’s a favorite topic for series creator David Chase, but it usually results in some of the series’ most on-the-nose moments. The sentiment manifests itself with Melfi’s husband, Richard, who has an unfounded shamefulness for his heritage, blaming the stereotyping of Italians on pop culture’s obsession with the Mafia. In fact, he’s such a piece of shit that he’s more concerned with the rapist’s last name (“Rossi? That’s an Italian name, isn’t it? The lady on the phone said he was Puerto Rican”) than with the well-being of his wife.

I personally don’t think this overarching theme on cultural nationalism should take precedent over the larger tragedy. It varies the tone when perhaps the tone shouldn’t be varied. As Dr. Melfi goes through her distressingly traumatic experience, the rest of the installment is darkly comic, with Ralph Cifaretto, Jackie Jr., Johnny Sack and Janice Soprano all given ample screen time.

That isn’t to say “Employee of the Month” is bad — these are only reasons why it isn’t perfect. It’s still one of The Sopranos‘ greatest episodes.

Still, it’s a shame that Melfi’s plight is so casually incorporated into the surrounding “nothing happens” fare. Elsewhere in the episode, Janice continues her petty argument with Livia’s former housemaid, Svetlana, over the theft of her prosthetic leg. Her storyline is mostly used as comic relief, and she ends the episode getting roughed up by some Russians, finding herself “born again” in the grace of God. Tony visits her in the hospital: “All this soul-searching, it’s always on my fucking time!”

Meanwhile, Ralphie tries to bond with the ever-arrogant Jackie Jr., bringing the kid along on some mob-related errands. In fact, Ralphie is starting to become even more arrogant and annoying than his young protégé. He acts out after Tony passes him over as capo of the Aprile crew, suggesting future turmoil to come.

Additional headaches come in the form of Johnny Sack’s move to New Jersey. The NYC underboss claims he only bought the house because of his wife, but Tony knows a watchful eye when he sees one. Sack didn’t move across the bridge for the lower property taxes and scenic locale.

Of course, Dr. Melfi is the only character whom we really want to see. Her storyline is immediate and heart-wrenching. The fact that she can even muster the strength to speak — Bracco’s voice hoarse yet wholesome — is commendable and powerful. She’s been beaten, but not broken.

A particularly haunting scene involves her in line at a fast-food joint, dropping her soda after seeing a picture of Jesus Rossi on the wall, thus giving the episode its title. Another memorable moment is her nightmarish dream sequence, which focuses on her subconscious desire for poetic justice — Jesus Rossi being mauled by a Rottweiler.

The main dilemma of “Employee of the Month” then becomes this: should Melfi sic Tony on her rapist, or should she remain silent and save her soul? Everything she’s done so far on the series has led up to this moment, and this is effectively the climax of her character arc for the entire series.

As an audience, we know that Jesus Rossi deserves to be flayed alive. Melfi knows it, too. She confesses that nothing has given her more satisfaction than seeing “that employee-of-the-month cocksucker” torn limb from limb by the Rottweiler in her dream. But to give in to Tony’s toxic influence would be the “wrong” thing to do. In the long run, nothing good can come from it.

And so, in the poignant final moments, Melfi ultimately rejects Tony’s offer to help. She breaks out in tears during a therapy session, and Tony rushes to console her. She regains her composure, and tells him to sit back down. Tony remains concerned. “You wanna say something?” he asks.

The long pause — a prolonged, agonizing moment of silence — “No,” is her pained, assured, final response.

With the emotional cut to black, the story of Melfi’s darkest hour is shut forever and never mentioned again. Critics of The Sopranos often say David Chase is so cynical that he actually hates his audience. If you subscribe to this theory, then you’ll agree it’s particularly cruel for him to judge us for wanting Melfi’s final response to be different.

Even though there are over 50 episodes remaining, Melfi’s character has served her fundamental purpose. She can choose to entangle her life with Tony’s, or she can choose to let life go on. She decides on the latter, and will never let a temptation of this magnitude sway her again. For the rest of the series, she’ll confront her willingness to remove Tony from her life.

For now, however, she remains the most admirable character in The Sopranos universe. It’s amazing that such a tragic moment results in such a life-affirming, personal triumph.

The Sopranos S3E4: “Employee of the Month”

4 thoughts on “The Sopranos S3E4: “Employee of the Month””