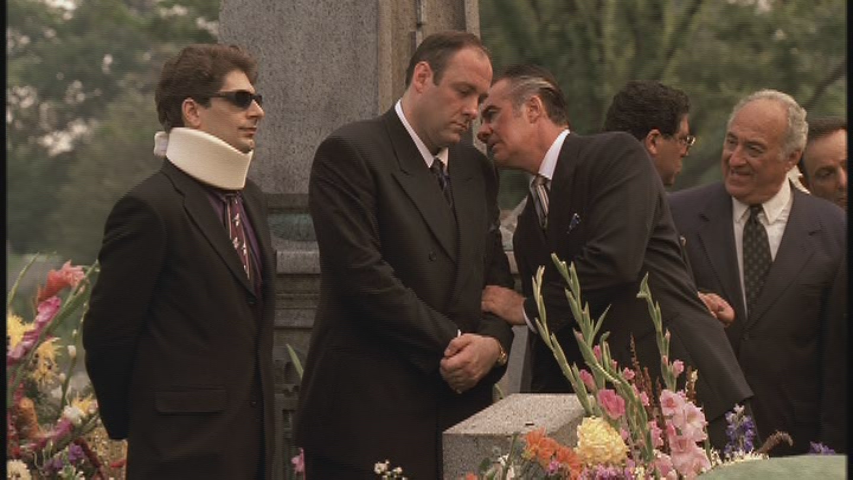 Meadowlands” is a weak episode of The Sopranos, but it’s only relatively weak. Allow me to explain: The Sopranos‘ first three episodes (the pilot, “46 Long” and “Denial, Anger, Acceptance”) make up one of the strongest opening trios in TV history. It’s only natural that an episode like “Meadowlands” comes along to slow things down. I’m not saying this is a bad installment by any means — only that “Meadowlands” appears weak by impossibly high Sopranos standards.

The main reason “Meadowlands” feels inferior is because of a particular storyline — nay, character — that it decides to focus on. I know I’m not alone in calling AJ Soprano one of the most annoying TV characters of all time.

Last episode, we spent some time with Tony’s daughter, Meadow, watching as she and her annoying friend, Hunter, tried to score crystal meth in order to study for SATs. It was by far the dumbest storyline in the episode, but it was at least tolerable due to Jamie-Lynn Sigler’s believable performance. In “Meadowlands,” we focus on the other Soprano kid — the boring one with the shitty actor.

It’s actually not a stretch to say that AJ’s character peaked in the first episode of the series, with the now-iconic line, “So what? No f**king ziti now?” He’s gone downhill ever since.

In “Meadowlands,” we watch as AJ gets into a fight with a kid at school. Not only is it one of the least memorable scenes in Sopranos history; it’s the only part of the show that feels extremely dated. Unlike the rest of the series, AJ Soprano’s middle school hijinks look like they actually belong on TV, and I mean that as an insult.

The main point of the storyline is about AJ coming to the realization that his dad is in the mafia. However, the episode spends an inordinate amount of time away from Tony to come to this conclusion. It only confirms what we already knew — that his son is dumber than a box of rocks.

The sad thing is, this will be AJ’s defining trait throughout the series. He’s got no ambition, and even less motivation. Every time he gets a spotlight, we go through the same boring routine (with “Down Neck” being the lone, season one exception). However, I guess we can’t blame AJ for everything — Tony’s parenting deserves an indictment, as well.

Luckily, the rest of the episode isn’t quite so expendable. The hour begins in Tony’s dreams, as we see his subconscious fears of what could happen if the guys find out he’s seeing a shrink. It’s a bold way to open the episode, but the scene is a little clunky in execution. Compared to the surreal greatness of future benchmarks like “Funhouse” or “The Test Dream,” this initial dream sequence is a little too on-the-nose. Although, yet again, only inferior by impossibly high Sopranos standards.

Tony wakes up from his dream not in his own bed, but next to his Russian girlfriend, Irina. He heads home and tries to bond with AJ. Together, they play some late-night Mario Kart. It’s in these quieter moments that The Sopranos continues to make big strides.

For example, much of the episode’s emotional heft is driven by the deaths of Jackie Aprile and Brendan Filone. Jackie succumbs to his cancer, which results in a power struggle between Tony and Uncle Junior over control of the family, while Brendan’s murder becomes a powder keg that could ignite a full-scale war.

Tony diffuses the situation by putting Dr. Melfi’s counsel into practice — giving the elderly the illusion of control (she was originally offering advice about Livia). Tony cedes leadership of the family to Uncle Junior, which avoids unnecessary bloodshed and also places Junior as the unwitting lightning rod for the feds. He’s boss in name only, as Tony still retains the support of the capos.

The Sopranos tends to struggle, at least in these early episodes, when the writers step out of their comfort zone. For example, the aforementioned scenes at AJ’s middle school have no business being the main focus of a mob show. Likewise, the spotlights on Dr. Melfi’s personal life feel similarly redundant.

Because Tony wants his psychotherapy to remain a secret, he hires a crooked cop, Vin Makazian, to spy on Dr. Melfi and find out if she has an active social life. Vin misunderstands the situation, and assumes that Melfi is just another one of Tony’s comares. This results in him beating up her boyfriend in the middle of the street.

Although the storyline features some of The Sopranos‘ trademark violence, it still feels like part of a different series altogether. Melfi garners the second-most screentime on the show due to her extensive interactions with Tony, but she’s not important enough to warrant a standalone by herself.

Not yet, at least.

The ending of “Meadowlands” is superb, lifting a pedestrian episode to one that is slightly better than average. It makes all the frivolous storylines — even AJ’s — suddenly worthwhile.

As everyone pays their final respects at Jackie’s funeral, Mazzy Star’s “Look on Down from the Bridge” drifts onto the soundtrack, the introductory organ fanfare befitting of the cemetery burial backdrop. It fits perfectly with the final images.

By now, AJ has gone through his own self-contained arc in which he finds out the truth about his father’s livelihood. Meadow offers a knowing glance, as the scene clearly resembles (or pays homage to) Vito Corleone’s funeral in The Godfather.

Tony, surrounded by his mob associates, smiles and winks toward AJ, who watches from afar with a glum look on his face.

2 thoughts on “The Sopranos S1E4: “Meadowlands””