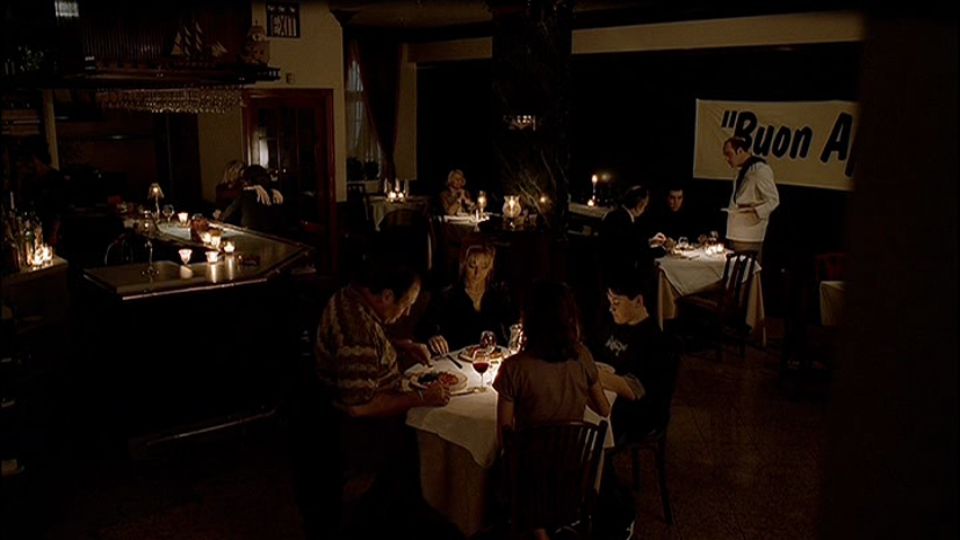 “Remember the Times that Were Good”

“I Dream of Jeannie Cusamano” is 60-minutes long without a single second wasted. As far as season finales go, it’s a perfect capstone to the previous twelve episodes that came before. And as far as first season finales go, I’m not sure it gets any better than this.

The basic plot line of The Sopranos season one, when stripped down to its bare essentials, is Tony’s power struggle with Uncle Junior. But series creator David Chase has progressed this story rather unconventionally, via detours into college road trips, girls’ high school soccer games and gangsta rap. The narrative progression was revolutionary back in 1999, and it is still unique today — a long, meditative funeral march moving with the pace and grace of natural life.

The plot points that have been slowly brewing — Livia’s true evil, the threat of the feds, Junior’s rivalry with Tony — are all picked up in earnest in “I Dream of Jeannie Cusamano,” making it a true climax through and through.

Several HBO shows, notably Game of Thrones and The Wire, use the season finale as an anticlimax to reflect on what came before, the carnage usually occurring in the penultimate episode. “I Dream of Jeannie Cusamano,” on the other hand, is action-packed from the get-go.

Tony knows that Junior staged the unsuccessful attempt on his life in “Isabella,” and so he acts accordingly, ordering Junior’s entire regime to be wiped out. As a result, there are several obligatory deaths to go around.

First off is Jimmy Altieri, the suspected snitch, who is given the axe early on. His body is dumped in an alley with a rat stuffed in its mouth. Tony gets in on the action later on, shooting Chucky Signore at the pier, absurdly producing a gun from a large, grotesque orange fish.

Most satisfying of all, however, is Mikey Palmice’s execution at the hands of Chris and Paulie. The sequence is fantastic: an on-foot chase scene through the woods, two gun-toting mobsters pursuing a third, all three fittingly wearing tracksuits. It’s also a scene of great, underplayed levity — Chris finally getting redemption for Brendan Filone’s murder, while Paulie is more concerned with the poison ivy he ran into.

Uncle Junior escapes Tony’s wrath, sort of, by being arrested by the feds. One of the episode’s best scenes comes toward the end, as Junior is given the chance, in exchange for his freedom, to admit that his nephew was the actual boss of the Family. The camera is close-up on Uncle Junior’s face, actor Dominic Chianese saying all he needs to say with a simple stare. But his line of bald-faced denial hits even harder: “My nephew running things? Not that strunz. Not in this life.”

Tony finds out via the FBI that his uncle wasn’t the only family member conspiring to kill him; his mother wanted him dead, too. Livia Soprano has been one of the series’ driving forces thanks to Nancy Marchand’s unforgettable performance. In fact, she’s emerged as the main villain.

Dr. Melfi predicted that this would happen, but Tony reacts violently to her assumption. It’s the first time that she sees him for who he truly is, and actress Lorraine Bracco delivers her finest performance of the season in only two scenes. In doing so, she truly makes us feel Melfi’s fear — this is what happens when you tell the truth to a man like Tony Soprano.

When the episode was filmed, Chase didn’t even know if The Sopranos would be renewed for a second season. As a result, this season finale can reasonably serve as a series finale. “I Dream of Jeannie Cusamano” leaves plenty of room for future developments, but also works as a suitable end point, emotionally speaking.

Many characters are given fitting closure, and Uncle Junior’s prideful scene with the feds is just one of the many highlights. Dr. Melfi’s second great moment occurs when Tony comes back to warn her that her life may be in danger (Tony seeing a therapist was one of the main reasons why Uncle Junior wanted him dead). Bracco’s reaction is fantastic, showcasing an exasperated, human side to her character. Even though we’ve seen Melfi’s family in a previous episode, this is the first time where we truly recognize that she has a life outside of her encounters with Tony. There are other patients whom she has to care for.

Likewise, Carmela finally gets closure with Father Phil, rejecting his half-assed advances, and calling him out for being a manipulative asshole who uses spiritually hungry women for the whiff of sexuality. It’s a minor triumph.

Even Artie Bucco finds out that Tony was the one who burnt down his restaurant way back in the pilot. All loose ends seem to be tied.

Yet typical of David Chase and The Sopranos, many aspects are left ambiguous. Was Jimmy actually a rat? In all likelihood, yes, but the truth is never actually confirmed. His final utterances of “oh my god” are open to interpretation. And where the hell is Big Pussy?

Most notable, however, is Livia’s convenient “memory loss.” Is it the result of her declining health, or is it more of her manipulative tricks? She’s the one who absent-mindedly tells Artie about the restaurant, which causes Artie to tearfully confront Tony with a shotgun, which in turn sets Tony off on his mother. The hatred is reciprocated

In the end, Livia escapes Tony’s wrath, sort of, by suffering a stroke. Tony confronts her as she’s carted away to an emergency room, originally intending to smother her with a pillow. As Tony is restrained by doctors, Livia appears to smile, though her oxygen mask keeps us from knowing for sure.

The Sopranos‘ debut year has been built on themes of family and trust. Tony Soprano, of course, has two families, and the big question is to which one does he truly belong. The lines and loyalties have often been blurred, but season one’s final scene clarifies which one he cares about the most.

Family gatherings are a common theme when it comes to Sopranos season finales. As a matter of fact, the series finale, “Made in America,” explicitly references the ending of this episode. That’s because this final scene is the most optimistic — and most important — affirmation in the entire series.

During a violent thunderstorm, Tony, Carmela and the kids come across a tree blocking the road, and are forced to seek shelter at Artie’s new restaurant, Nuovo Vesuvio’s. Tony managed to dissuade Artie from killing him earlier, and so this time the host welcomes his childhood friend with open arms.

Inside a candlelit Vesuvio’s, also taking refuge, are the likes of Silvio, Paulie, and Chris and Adriana, the restaurant aglow with friendly chatter. And there sits Tony with his family, happy to be alive and well with the ones he loves. In a line that will be echoed in the show’s final moments, Tony tells his kids to remember and cherish the little things.

It’s a perfect end to a masterful season of television, one of the greatest debuts of all time.

The Sopranos S1E13: “I Dream of Jeannie Cusamano”

2 thoughts on “The Sopranos S1E13: “I Dream of Jeannie Cusamano””