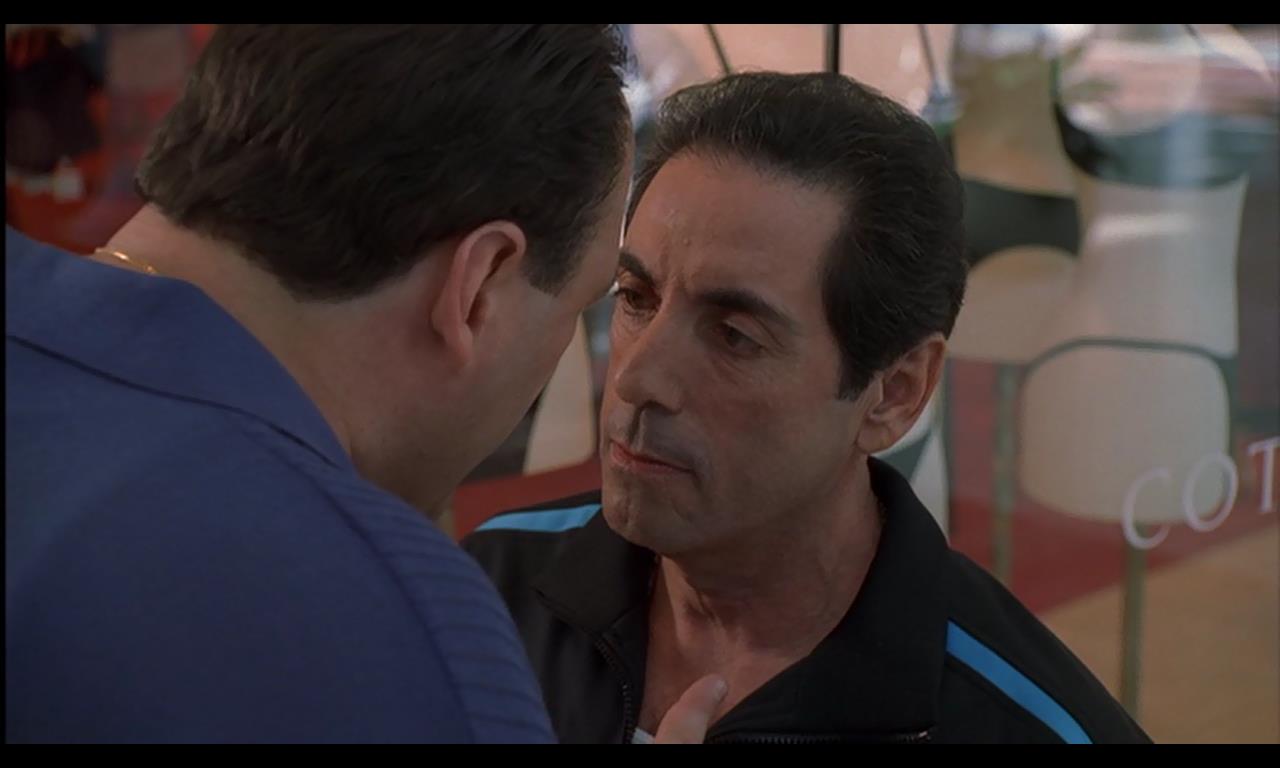 Season two of The Sopranos starts off slow in terms of plot development, yet it’s tightly structured and exhilarating in terms of character development. That might sound boring on the surface, but hear me out.

I talk about character development being key in this “slow” start to season two because the characters are so compelling to watch. Even though they spend most of their time just arguing with each other, the conversations are completely genuine. So what if nothing happens? The dialogue is top-notch, and the acting is top-rate.

Most of all, the humor shines through. When The Sopranos isn’t busy running over someone’s legs or smashing a coffee pot over someone’s head, the series can honestly be seen as a comedy. An agitated Tony Soprano is the funniest Tony Soprano, and there’s plenty of darkly comic dialogue throughout this early portion of season two.

And for those of you who favor plot development, you’re in luck! “Toodle-Fucking-Oo” introduces us to Richie Aprile, the brother of deceased former-boss Jackie, fresh out of a 10-year stint in prison. Played by David Proval in a performance of Al Pacino-like intensity, Richie means business right from the get go. One of the first things we hear him say is a sinister, singular utterance of “motherfucker.”

It’s clear that Richie is a sadistic sonofabitch, and naturally, he’s the one responsible for the aforementioned driving-over-the-legs and coffee-pot-over-the-head beatdowns — one of which occurs just minutes after we meet him, both of which occur to the same victim. Poor Beansie.

Richie is a misplaced relic from a bygone era. After 10 years in the can, he finds it hard to adjust to new doctrines. You can already tell that he’s going to be trouble for everyone involved. And to blur the lines of family and Family even further, Richie strikes up a romance with Janice, an old flame from yesteryear. They get reacquainted at a yoga class.

Richie Aprile will be the main antagonist moving forward, yet his brash introduction doesn’t impede upon the rest of the episode. Even though his constant aggression provides a much-needed jolt of energy, the episode moves by at a leisurely pace, as matter-of-fact a moment as when Big Pussy was revealed to be an FBI informant.

Elsewhere, we have several humorous subplots that fall into “nothing happens” territory. In the Soprano household, Meadow gets in trouble for throwing a party at Livia’s abandoned house, which gives Tony and Carmela the opportunity to show off their terrible parenting skills. It also goes to show how much of a brat Meadow truly is.

Meanwhile, Dr. Melfi runs into Tony at a restaurant. Their conversation is awkward, full of stilted small-talk and miscommunication. She ends the encounter with a girlish “toodle-oo,” which causes her to experience conflicted emotions about her former patient. On the one hand, she feels extremely guilty for refusing to take him back. Then again, she dreams about Tony having a panic attack while driving. All the while, “Optimistic Voices” from The Wizard of Oz plays in the background, possibly expressing her subconscious desire to be rid of Mr. Soprano forever: “You’re out of the woods/You’re out of the dark/You’re out of the night”

As inconsequential as these storylines might appear, they remain compelling because each scene is delivered with brilliant comedy. Carmela vs. Janice, Meadow vs. bad parenting, Richie Aprile vs. the world — it all goes to show that a premium drama doesn’t need to be overly serious to be considered prestige.

Even though the episode’s ending is more of a formal shrug than a poignant send-off — welp, whatever, life goes on — “Toodle-Fucking-Oo” is an early-season installment that is as solid as the title.

2 thoughts on “The Sopranos S2E3: “Toodle-Fucking-Oo””