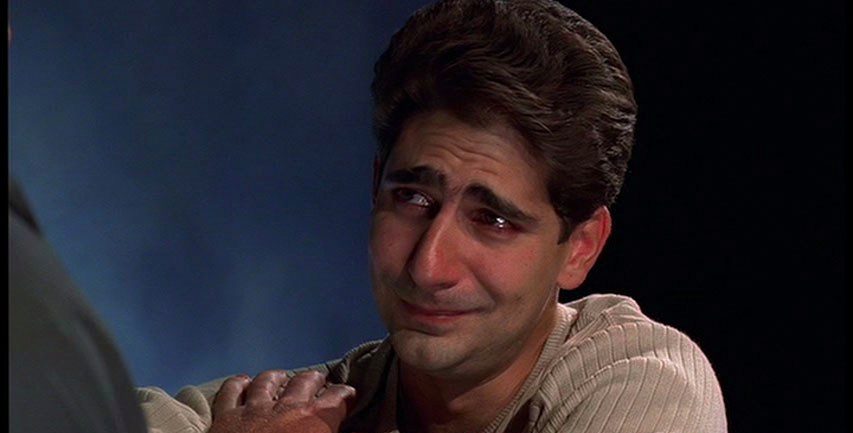 This episode is one of my personal favorites, though it might not be for everyone. As I’ve mentioned before, I’m a big fan of Christopher Moltisanti, and “Big Girls Don’t Cry” is another one of the character’s finest moments.

The natural continuation to season one’s “The Legend of Tennessee Moltisanti,” “Big Girls Don’t Cry” once again finds Chris in a very sympathetic state. For his birthday, his girlfriend, Adriana, enrolls him in an “Acting for Writers” course to help him get his screenplay woes (the unfinished You Bark, I Bite) off the ground. Throughout the episode, he continues to be conflicted between his self-conscious machismo and his unadulterated passion for movies.

It sounds like the blandest and most pointless storyline yet, but make no mistake, Chris’ scenes are what make this episode so great. You could argue that if the rest of the episode was up to par with the main plot, then this one could have been an all-time classic.

Writer Terence Winter makes his Sopranos debut with this episode, and he’ll go on to become one of the series’ main architects. During his tenure with series creator David Chase, he was responsible for some of The Sopranos’ best episodes, even though his specialty was capturing the in-between moments — the lulls in action when the day-to-day lives of the characters take center stage.

In “Big Girls Don’t Cry,” Winter manages to touch base with nearly every character, save for Janice and Livia, as his script moves from downtime to downtime. The lack of action hardly matters because Winter already has a complete mastery over the characters. The subtle actions rely on us having a good knowledge of what has come before, and the understatement provides depth to each respective arc without saying too much. Not a single moment is wasted.

Notice as AJ remains silent and dismayed in the corner of the kitchen, as his father angrily rips the phone out of the wall. Artie and Charmaine Bucco continue their marital squabbles. Watch how Carmela immediately slams the door when Uncle Junior shows up at the house. Or how Big Pussy, feeling forgotten, tries to make jabs at newcomer Furio Giunta. And, of course, Irina giving junk food to some nearby ducks, much to Tony’s dismay. The in-between moments are what make up this episode, and it relies on us having empathy for all the characters, and understanding what they’re going through.

The mob plot this week involves Furio, who is coming over to America, and a brothel-keeper who is behind on his payments. The two stories meet when Tony commissions Furio to send a message. And send it he does.

The in-between moments give way to the show’s biggest burst of violence yet, as Furio goes into the brothel armed with a pistol and a baseball bat, and hellfire ensues. Tim Van Patten once again directs, and he follows Furio’s carnage through the massage parlor in one visceral and unbroken tracking shot. The shaky, handheld camera provides a sudden jolt to the system. We already saw how ruthless Furio could be in “Commendatori,” but this Tarantino-like intensity takes us by surprise. And keeping true to the Tarantino aesthetic, the unexpected violence is beautiful.

Meanwhile, Dr. Melfi continues to visit her therapist, Dr. Elliot Kupferberg, throughout the episode, relaying her conflicting emotions about dropping Tony as a patient. It’s obvious that for her role on the show to continue, she will have to pick Tony back up eventually.  And even though her therapy sessions with Kupferberg are somewhat tedious — as are Tony’s “therapy sessions” with Hesh later on — they do provide some good moments of humor.

She finally reaches out to Tony, but he rejects the offer. Nevertheless, she leaves the hour open in case he changes his mind. Reluctantly, he shows up at her office. In their first therapy session since season one, Dr. Melfi probes, and Tony predictably lashes out. A return to normalcy.

But Christopher’s plotline is the one that gives “Big Girls Don’t Cry” its high grade. You could say that him taking a theater class is another in-between moment, but it’s one that resonates throughout the episode, even transcends it. Every time the episode cuts away from his story, I want to get back to it as quickly as possible.

Chris has had some good moments thus far in season two, but nothing special. In fact, he hasn’t done anything much since “The Legend of Tennessee Moltisanti.” “Big Girls Don’t Cry” places him squarely in that lovable underdog role once again, while also showcasing him as one of the funniest characters on the series.

Chris is insecure and unconfident, constantly looking for some sort of recognition. To his (and our) surprise, he’s a natural actor, quickly becoming the star of the class through his talent, humor and effortless charisma.

When Chris first introduces himself to the class, Van Patten films from a slight downward angle, as Chris keeps his head down and eyes on the floor. However, once he tells a few jokes and taps into his obvious flair for the theater, he sits confidently among his classmates, finally able to look them in the face.

Nevertheless, he still feels conflicted. This may be the life he dreams about, but he’ll forever be trapped by the commitments to his other life that tie his hands. If anyone ever found out about his acting abilities, it could ruin him (just like how Tony tried to keep his therapy a secret in season one). That’s why he’s afraid to break out of his shell. When Adriana starts to giggle as they practice a scene together, Chris immediately retreats, says “fuck this” and snorts a line of coke.

When Chris finally does break out of his shell, he goes too method, breaking down in tears while reenacting a scene from Rebel Without a Cause. After the scene is over, he storms out of class. During the next session, he punches a fellow acting student in the face. David Chase once again cruelly teases how people will never change.

But the ending of the episode is a particularly heartbreaking cruelty from Chase, hitting all the right notes of tragedy. What’s most amazing about the scene is that it doesn’t need dialogue to operate.

Chris walking out to the alley and throwing away all his screenplay material is one of the saddest moments of the entire series. Unfortunately for him, it’s a defining moment in his character development.

I’d wager that this is one of Chris’ best moments on the entire show. As a matter of fact, season two is probably when he was at his peak. He’s definitely at his most likable, and he’ll go on to steal every scene he’s in this year, retaining that lovable underdog demeanor throughout the season’s duration. “Big Girls Don’t Cry” is one of Chris Moltisanti’s, and actor Michael Imperioli’s, finest hours.