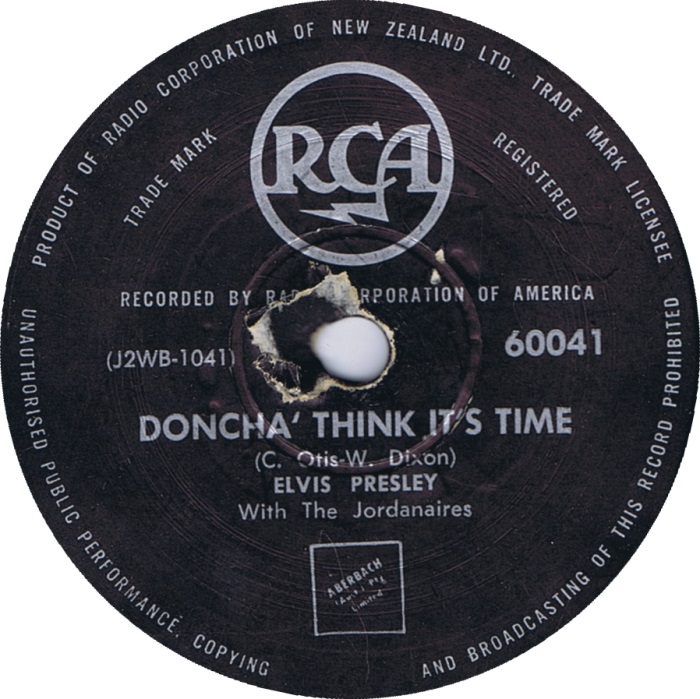 Recorded in 1958 amidst tensions between Elvis, Scotty Moore and Bill Black, “Doncha’ Think It’s Time” famously took 48 takes to record. The two-minute song is deceptively complex, featuring a shape-shifting beat and several changes in tempo. Unfortunately, it’s buried at the tail end of the largely forgettable 50,000,000 Elvis Fans Can’t Be Wrong compilation. Nevertheless, it remains one of the forgotten highlights of the King’s discography.

Even though “Rock Around the Clock” and “Shake, Rattle, and Roll” are often attributed as the first songs to popularize rock ‘n’ roll, Les Paul & Mary Ford’s 1951 recording of “How High the Moon” is the song that serves as the genre’s introduction. Paul’s guitar techniques were decades ahead of their time and Ford’s double-tracked vocals convey a dreamy quality rarely heard in country tunes. A perfect combo.

Released in 1958, this slow-paced doo-wop hit is one of the decade’s forgotten classics. Amidst ghostly choirs and baritone sax solos, Ed Townsend’s somewhat stiff vocal almost feels out of place, a strangely haunting melody that seems at odds with the tender lyrics.

47. “You Don’t Know What Love Is” by Sonny Rollins

“You Don’t Know What Love Is” is a famous jazz standard with memorable renditions by Miles Davis, Dinah Washington, and many, many more. Yet the definitive version can be found on Sonny Rollins‘ Saxophone Colossus LP, originally released in 1957. For six-and-a-half minutes, Rollins puts on a soulful showcase that proves his talent as the greatest sax player of all time.

Herman Poole Blount a.k.a. Sun Ra was one of the most radical jazz composers of the era. This short electric piano solo (one of the first recordings to highlight the instrument) from his sophomore LP is the full avant-garde experience: it begins with a simple riff before deconstructing into dreamily chaotic free improvisation. Although it’s just a blip in Ra’s eclectic discography, “Advice to Medics” perfectly represents his artistry.

45. “Mountains in the Moonlight” by Johnnie Ray

“Cry” was Johnnie Ray’s biggest hit, but “Mountains in the Moonlight” is his greatest — and most underrated — song. His unique vocal affectations are the result of being partially deaf, and when combined with the unusually cryptic lyrics, the eerie ballad takes on an otherworldly quality.

Gunfighter Ballads and Trail Songs made Marty Robbins a country superstar, an accolade that’s evident from the album’s opening track. “Big Iron,” which tells the compelling story of an Arizona lawman and a young Texas outlaw, features all the bluster and bravado of a John Ford western.

Cool jazz meets crooning in Helen Merrill’s 1954 cover of this Billie Holiday classic. The singer’s wispy voice intertwines perfectly with Clifford Brown’s soulful trumpet, making for one of the more sophisticated tunes that vocal jazz has to offer.

42. “Abide with Me” by Thelonious Monk

The best song on Thelonious Monk’s 1958 LP Monk’s Music is only 53 seconds long and doesn’t even feature Monk at all. Nevertheless, “Abide with Me” is a perfect album opener — an all-horn cover of an 18th century hymn by William Henry Monk (no relation). It even influenced The Beach Boys.

41. “Dancing in the Dark” by Cannonball Adderley

Over spare accompaniment, Cannonball Adderley closes his landmark Somethin’ Else LP with a dramatic — yet very laidback — rendition of “Dancing in the Dark,” a song originally made famous by Bing Crosby in the 1930s. Despite the tune’s associations with The Band Wagon, Adderley’s lonely twilight cover remains the finest interpretation of this American standard.

40. “I Apologize” by Billy Eckstine

There isn’t a swing ballad from the 1950s more genuine than Billy Eckstine’s lush depiction of “I Apologize.” Even though the backing orchestrations border on overly sentimental, Eckstine’s operatic baritone delivers a full-throated plea for forgiveness. When he petitions “From the bottom of my heart, dear/I apologize,” his credibility is never questioned.

“Rumble” is full of swagger and oozes with confidence. In fact, it features so much bravura that it’s the only instrumental to ever be banned from the radio. In the 65 years since its release, few songs have rocked harder, and few songs have made such a lasting impact.

No one wrote pop songs better than Sam Cooke, and it only takes one listen to his 1957 debut single to figure out why. Everything about “You Send Me” is perfect: catchy melodies, beautiful vocals, simple chord progressions and straightforward lyrics to match. It’s no surprise that he immediately rose to R&B superstardom.

Despite having a prolific discography throughout the entirety of the 1950s, Thelonious Monk didn’t have a plethora of songs. This anomaly is due to the fact that he re-recorded his original standards in different iterations and variations for the duration of his career. The 1959 version of “Monk’s Mood” recorded live by an orchestra at NYC’s Town Hall concert venue is a stunning resurrection of one of his most solitary tunes.

36. “Moanin’ the Blues” by Hank Williams

Featuring steel guitar, fiddle and a yodeling chorus, this 1950 classic by Hank Williams was the country legend’s fourth number one single. Even though it was released over 70 years ago, “Moanin’ the Blues” remains — along with the rest of Williams’ discography — the absolute pinnacle of country music. It hasn’t been topped since.

35. “Reincarnation of a Lovebird” by Charles Mingus

This forgotten classic from Charles Mingus’ underrated 1957 LP The Clown is full of the bandleader’s trademark idiosyncrasies. The intro is full of nervous false starts, the main chorus is meandering and mysterious, and the finale brings all the disparate elements together for an ambiguous conclusion.

Released in 1955, “Maybellene” is a perfect encapsulation of the rock ‘n’ roll spirit: youthful lyrics, powerful guitar, and an overall feeling of nonstop excitement. Fast cars, young love, and sexual innuendo became the building blocks for the entire genre.

The opening riff of “Summertime Blues” is one of the most iconic in rock ‘n’ roll history. Oftentimes the best songs are the simplest, and Eddie Cochran’s rockabilly-inflected remains timeless. In fact, it’s one of the few songs in Colin’s Review history to also feature in two Best Songs of the Decade lists.

32. “My Funny Valentine” by Frank Sinatra

Frank Sinatra’s jazzy version of this show tune classic is one of the singer’s breakthrough works. But even more impressive than the vocals are Nelson Riddle’s lush arrangements combining jazz and classical. When the song unexpectedly switches to a waltz halfway through, it represents a turning point for Sinatra’s career.

Cliff Richard’s greatest song is a surf-rockin’ ode to Elvis Presley, featuring immense swagger and a vocal performance for the ages. But the real reason this song ranks so high on this list is because of his backing band, The Drifters (who would later become The Shadows). Their sinister beat drives the song forward, leaving listeners with no choice but to obey Richard’s titular command.

If you ever need to be convinced of Elvis Presley’s musical talent, simply listen to this underrated classic from his debut LP: tender vocals, technically proficient instrumentation and a warm arrangement that combines elements of country, R&B and rockabilly.

How many musicians have the balls to write a self-titled song? Bo Diddley provided the blueprint for every rock star that followed, and this chart-topping single from 1955 immediately became iconic. Waves of tremolo’d electric guitar reverberate and drench the song in raw rhythm & blues, while the chugging “Bo Diddley beat” pummels the listener into a trance. It was a new kind of rock ‘n’ roll, and only a cocksure musician like Ellas “Bo Diddley” McDaniel could bring it to fruition.

28. “In the Wee Small Hours of the Morning” by Frank Sinatra

The title tune from Frank Sinatra’s greatest album perfectly sets the stage — lonely, lovelorn and majestically languid. The song strikes the perfect balance between mourning and hopeful, a beautifully despondent interpretation that only Sinatra could pull off.

Accompanying the greatest scene in cinematic history, Bernard Herrmann’s dizzying “Scène d’Amour” is Vertigo‘s only moment in which the ambiguous psychosexual tension is fully resolved. Although the entire score plays as a seamless symphony, this particular moment is the obvious standout. Jimmy Stewart and Kim Novak share a passionate kiss, and time quite literally stands still.

It’s no secret that Kind of Blue is the greatest album of the 1950s, but the LP wouldn’t have even been possible without the earlier innovations of Milestones and its magnificent title track. This was Miles Davis’ first foray into modal jazz, in which traditional bebop structure was quite literally turned upside down.