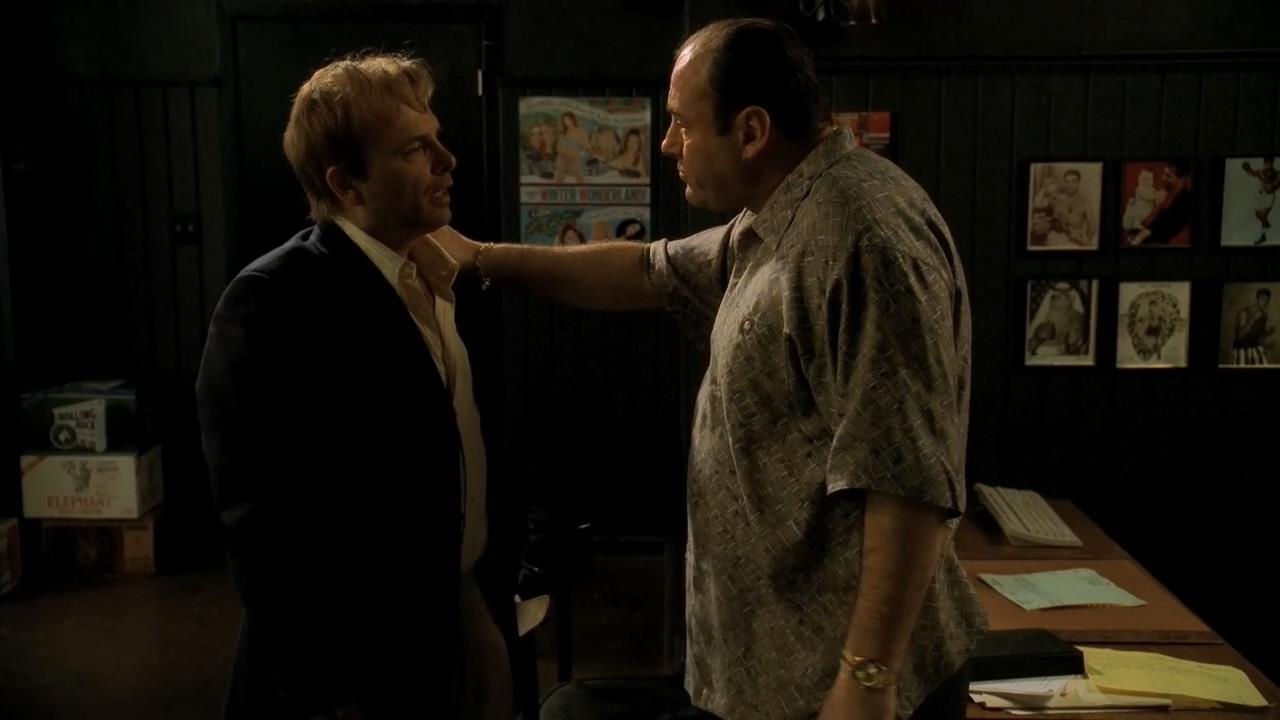 Whoever Did This: “Sympathy for the Devil”

It’s a rarity in The Sopranos that an episode blindsides us with its greatness, yet that’s exactly what happens in “Whoever Did This.” All throughout season four, we’ve been waiting for something to happen, and we’re completely taken by surprise when something finally does, even though the event in question has been brewing for over a year.

For instance, It’s no secret that Ralph Cifaretto has been an unforgivable antagonist ever since he was introduced. Nevertheless, he’s been an enemy we’ve learned to live with. In fact, he’s hung around so long that we’ve actually come to like him as a character. Once again, series creator David Chase passes moral judgment on his audience.

We were rooting for Ralph to die in “University,” but how do we feel about him now? That’s the conundrum the viewers are dealt in “Whoever Did This,” which builds upon this contradiction to craft one of the series’ greatest hours.

As we all know, The Sopranos revolutionized television by straying from typical storytelling conventions. However, Ralph’s redemption arc at the beginning of “Whoever Did This” is a TV trope as old as time. By delivering some of the funniest dialogue in the series (a hilarious prank call to Paulie Gaultieri’s mother in the retirement home), Ralphie instantly makes us forget about his past atrocities.

Shortly afterwards, his 12-year-old son (typical of The Sopranos to casually insert a new character that had never been previously alluded to) nearly dies in an accident, thus bringing instant remorse for Ralph and his family. He pledges to turn his life around and even turns to the church in his time of need. Against all odds, Ralph becomes a sympathetic character.

However, Tony Soprano (and Paulie) isn’t buying it. That’s because Tony is even more sociopathic than Ralphie. Case in point: the only person he truly cares about — other than himself, of course — is a racehorse named Pie-O-My. And when an all-too-convenient stable fire allows Ralph to collect a large sum of insurance money, Tony jumps to immediate conclusions.

“Whoever Did This” combines all The Sopranos’ best aspects — tragedy seamlessly blends with comedy, foreshadowing clashes with shock value, and visceral action is countered with moments of solemn meditation.

It should come as no surprise that the episode in which Tony murders Ralph is also the funniest of the season. Then again, “Whoever Did This” is full of surprises. Even though this event has been on the table now for a while, we didn’t actually believe Tony was going to do it until he did it. In the end, however, the scene is somewhat cathartic, and the result is somehow justified.

“Whoever did this,” Tony says, “it should have happened a long time ago.”

In the heat of the moment, Tony kills Ralph seemingly to avenge the death of Pie-O-My, yet he also equates it with the death of Tracee, the stripper whom Ralph brutally murdered in season three. “She was a beautiful innocent creature; what did she ever do to you?” he shouts during the struggle, potentially alluding to both victims.

Undoubtedly, Ralph’s death was a long time coming, but the death scene itself seems to last just as long. It’s rare for an action sequence in a mob show to dispense with gun violence, but the only available weapons are frying pans, boiling water and ant poison. This is a dirty fight to the death, taking place entirely in Ralph’s cramped kitchen. Consequently, it’s probably the best action sequence in the entire series.

The last time a major antagonist died was a shocking turn of events that came out of nowhere. In “Whoever Did This,” however, Ralph’s death is sudden but not necessarily shocking, and it occurs midway through the episode. The rest of the hour is concerned with hiding the evidence.

Tony calls his nephew, Christopher, to the scene of the crime and we witness what we didn’t get to see in “The Knight in White Satin Armor”: the exhaustive and painstaking cleanup. Director Tim Van Patten slows the episode’s pace to a crawl as Tony and Chris go about the step-by-step process of disposing the body, the two characters bonding over the familiar routine of getting rid of a dead associate.

Quite brilliantly, the episode shifts gears from fast-paced to minimalistic without losing any of its humor. As Tony and Chris mop up the blood stains and dismember Ralph’s corpse with a cleaver, they crack jokes and discuss their daily lives. They even have enough time to watch some TV on Ralph’s couch while they wait for nightfall.

Although “Whoever Did This” is best remembered as ‘the one where Ralphie dies,’ the episode is most impactful throughout its ruminative second half, in which Tony and Chris are the only featured characters. Its greatness lies in its subtleties; the shared history between the characters saying more than words ever could. Even though Ralph’s death provides plenty of narrative momentum, the main progression of the episode ends up entirely emotional.

After burying Ralph’s hands, toupee and severed head on a vacant farm (and tossing the rest of the remains in a nearby quarry), Tony and Chris head back to the Bada Bing to wash up and have a drink. Tony takes a therapeutic shower, looks at himself in the mirror and then passes out in the office.

Tony awakes the next day, by himself, shouting out for Christopher, who is nowhere to be found. The episode ends as he stumbles outside into the blinding light of the morning sun.

From the beginning, The Sopranos has looked at America’s turn-of-the-century malaise with a cynical gaze, and that growing feeling of uncertainty has only been magnified in season four. It initially appears that “Whoever Did This” is climactic, yet there are still four episodes remaining. We stumble into the enveloping darkness of the end credits unsure of what will come next.

The Sopranos S4E9: “Whoever Did This”