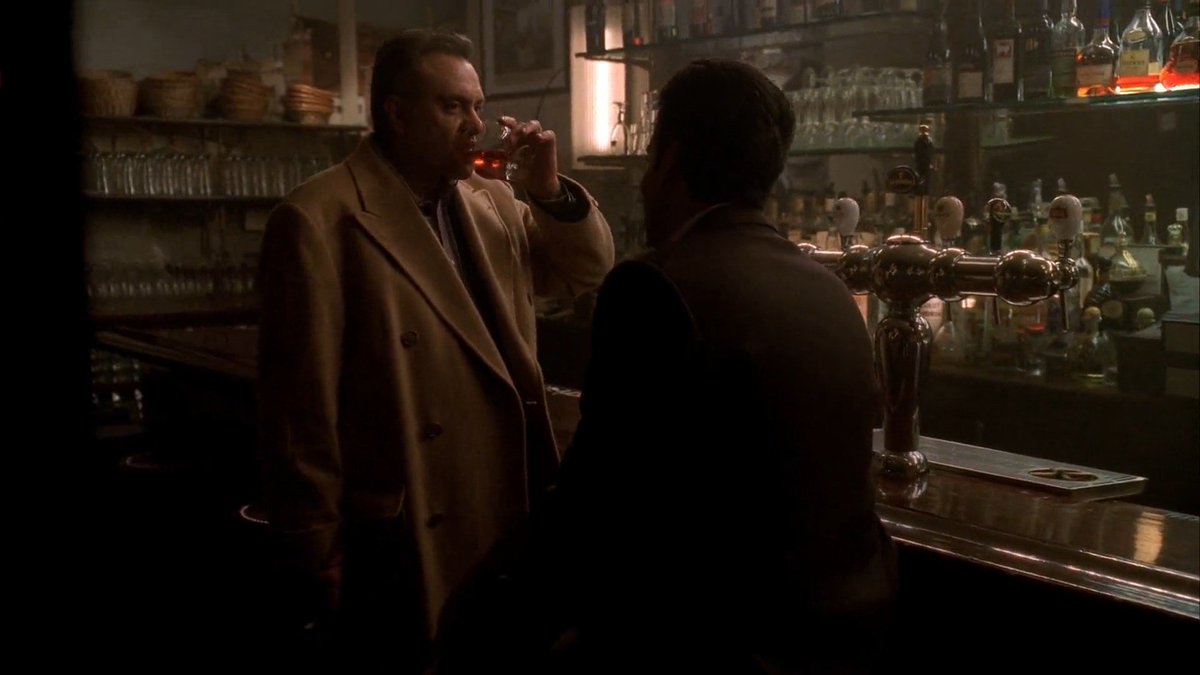 “Take a Load Off, Fanny”

The joke in question was made at the expense of Ginny Sacrimoni, Johnny’s diabetic wife. And even though Johnny himself wasn’t present when it was said, he hears through the grapevine (i.e. a disgruntled Paulie Walnuts) that Ralphie was the one who said it. After ruthlessly assaulting a member of Ralph’s crew for no good reason other than the fact that he was laughing in a bar, Johnny is now calling for Ralph’s death.

Season four has started slow, and the deliberately stagnant aesthetic doesn’t necessarily change in “The Weight.” Nevertheless, it’s good to see The Sopranos getting back to some good, old-fashioned mob violence, especially after the uneventfulness of the previous episodes.

Johnny Sack has steadily become one of The Sopranos’ most memorable side characters ever since being integrated into the main fold early in season three. However, he was never given an extended spotlight until now, and it’s somewhat surprising to find out how complex and empathetic he can be.

Even though we have to question Johnny’s quick temper and hair-trigger reactions, we have to admire his chivalrous intentions. Ginny is probably the nicest character on the show, and the fact that her husband wants to kill the man who made a joke about her is The Sopranos at its most romantic.

The episode’s most touching scene comes toward the end, when Johnny discovers Ginny sneaking candy in the basement. After a brief argument (Ginny is blissfully unaware of the extreme tensions that her eating disorder has caused within the mob), Johnny breaks down and professes his undying love. Existing outside of the main plot, it’s possibly the most heartwarming moment in the entire series.

In the end, Johnny calls off his revenge, and Ralphie never realizes how close he came to getting clipped. In true Sopranos fashion, nothing happens, yet the lesson is that death can come to anyone at anytime. For instance, Johnny himself never realizes that his own boss, Carmine Lupertazzi, was calling for Johnny’s assassination behind the scenes.

Contrast Johnny’s “noble” actions with the rest of the characters’ selfish desires. Tony and Carmine are willing to sacrifice their own soldiers in the interests of protecting their multimillion-dollar Esplanade project. Likewise, Tony’s gift for Carmela at episode’s end — a skimpy black dress — is really just another gift for himself.

The true greatness of season four is how the main plot advances incrementally forward, yet it advances nonetheless. Carmela has shown subtle signs of attraction to Furio Giunta, but “The Weight” is the first time she begins to comprehend her own feelings. They dance together at Furio’s housewarming party, and what initially appears to be a humorous sight gag turns into something far more meaningful when they stare into each other’s eyes.

Similar to how “No Show” ended with a memorable shot signifying the growing divide between husband and wife, “The Weight” also ends with a scene emphasizing Tony and Carmela’s emotional distance — even when they have sex, their minds couldn’t be further apart.

Ever since it began, The Sopranos has always been a show about family. In season four, that focus has shifted to a series about marriage. Although the feud between Johnny and Ralph dominates the episode, the growing tensions between Tony and Carmela are what we really should be watching out for.

The Sopranos S4E4: “The Weight”