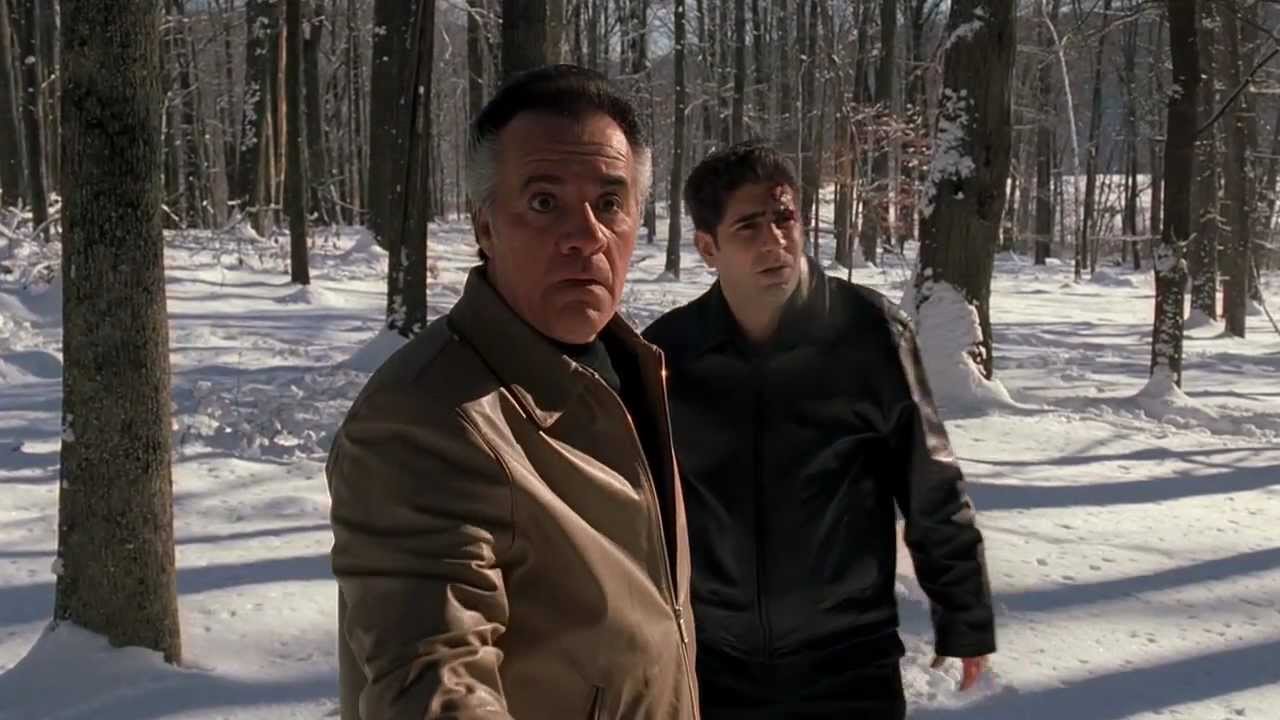 Pine Barrens: “Lost in the Woods”

“Pine Barrens” is both a symbolist masterpiece and a self-contained chef-d’oeuvre of postmodern irony. But the episode is best remembered as The Sopranos’ funniest hour. It’s truly a comedy classic.

Chris Moltisanti and Paulie Walnuts unsuccessfully attempt to dispose of a body, and end up getting lost in the woods, deep in the South Jersey wilderness of Pine Barrens. Before long, their isolated plight becomes metaphorical, allegorical, Biblical. But because of their inconsequential human nature, their actions paint a picture of humor, realism and vulgarity. Chris says it best when the two enter a heated argument: “Captain or no captain, right now we’re just two assholes lost in the woods.”

The episode largely takes place over the course of one long day. While Chris and Paulie traverse the frozen wasteland, the rest of the hour concerns Tony’s disenchantment with the depressive Gloria and Meadow’s dissolution with the douchebag Jackie Jr. Around the 40-minute mark, the trifecta reaches a climax as Chris pulls a gun on Paulie, Gloria throws a steak at Tony and Meadow discovers her boyfriend with a whore. Not a good night for nobody.

But the plotline for which “Pine Barrens” garners its incomparable accolades is Chris and Paulie’s fight for survival. There comes a moment halfway through the episode in which time seems to stand still — director Steve Buscemi’s camera pans over snowy tundra and barren treetops, bringing a supernatural aura to the proceedings. At this moment, the episode becomes transcendent, matching “College” in terms of greatness.

Paulie and Christopher’s day begins with the task of retrieving Silvio’s money from a Russian associate, Valery. Their banter echoes the opening scene of Pulp Fiction, with Paulie playing the arrogant Jules Winnfield and Chris as the subdued Vincent Vega. As they wait outside Valery’s apartment, their small talk regarding the Cuban Missile Crisis calls to mind foot massages and Royales w/ Cheese.

Unfortunately for them, Valery is basically The Sopranos’ equivalent of Pulp Fiction’s mysterious briefcase. After Paulie’s antagonizing nature goes overboard, a struggle ensues that results in Valery tied up, presumably dead, in the trunk of their car. Like the rest of “Pine Barrens,” even the fight scene is darkly comic, gaining humor because of its realism — Chris and Paulie get their asses kicked before they are able to overcome the hulking Russian. They drive to South Jersey to dispose of the body.

The camera’s slow crane from the treetops down to the lonely road is the first sign that “Pine Barrens” is more than it seems. I love the little visual inflections that director Steve Buscemi adds to the fore, turning the episode into a somewhat surreal pastiche, all about atmosphere. Buscemi would join the main cast in season five but contributed as a director in the meantime. “Pine Barrens” is by far his greatest achievement.

Chris and Paulie intend to dump Valery’s body somewhere in the woods, but are startled to find that he’s still alive. No matter — he’s bound, beaten and unarmed; what problems could he pose now? They make him dig his own grave.

Buscemi views the scene from what seems to be Valery’s P.O.V. — the camera shakily looking around at the barren trees as he is marched through the woods. The shot establishes unease, emphasizing the isolation of the storyline, while also providing a clue to a more famous P.O.V. later on.

Feeling at home in the snowy setting, Valery gets pumped up, and the moment Chris lets his guard down (“So how far is it to Atlantic City?”), he smacks him in the face with a shovel and makes a run for it. Chris and Pualie run after him, similar to their chase through the poison ivy patch in season one. Just when Valery is nearly out of sight, Paulie fires what appears to be a kill shot, a torrent of blood shooting out of his head.

Yet when they go to investigate, the Rasputin-like figure is nowhere to be found. A trail of footprints and blood abruptly stop, leaving Chris and Paulie clueless. The camera observes from the treetops as they stand in disbelief below.

This bird’s-eye-view P.O.V. is the episode’s most famous shot, and also one of series creator David Chase’s greatest mysteries. Did Valery somehow escape up a tree, or is it his spirit watching from above? Because we never find out what happens to the Russian, his disappearance has taken on a mythic quality.

Just like Pulp Fiction’s briefcase, the ambiguity may be meaningless, but that still hasn’t stopped people from trying to solve the unsolvable. Yet for all it’s worth, the real answer will never be revealed. What an asshole David Chase is to say that he alone knows what happened to Valery.

Throughout the episode, miscommunication is a crucial factor. Every cell phone conversation features static crackle and random garble, which only furthers Chris and Paulie’s complete isolation — they’re trapped on a completely different wavelength. Even the phone calls between others — like Meadow and Jackie Jr., or Tony and his ex-girlfriend Irina — feature miscommunication in the form of bald-faced lies.

Meadow’s realization that Jackie is nothing more than an entitled douchebag has been a long time coming. Her moment of clarity comes when they play Scrabble (Jackie’s words: POO, ASS, THE). Suspecting that he’s been cheating, she later finds him with a whore at his apartment in Jersey. Their relationship is (finally) over, yet Meadow still blames herself for what happened, professing that her boyfriend was “the greatest.” Geez.

Meanwhile, Tony is having troubles with Gloria Trillo, who is as manipulative as his mother. After enduring all the headaches he can handle, he sets out on a rescue mission with Bobby Baccalieri to save Chris and Paulie, who have reached a breaking point in their fight for survival.

Chris and Paulie have one of the most interesting relationships in the entire series — two secondary characters who form a reluctant father-son bond. This season alone has found them biting at each other’s throats ever since Chris became a made man, yet they managed to reach a resolution via a Big Mouth Billy Bass. In “Pine Barrens,” the tension boils over when Chris threatens Paulie with a gun during the heat of an argument. This time, however, the resolution is reached when Chris breaks down in hysterical laughter.

Even though their comedic chemistry forms the backbone of the storyline, the episode focuses more on Paulie’s perspective. After all, no matter how much he tries to pin the blame on Christopher, he’s entirely responsible for the whole ordeal. And when it’s all over, his new attitude is to now not give a fuck.

In the wake of Big Pussy’s death at the end of season two, the characters of The Sopranos have found themselves metaphorically lost, grasping at the last remaining straws of the idealized “good times.” For Paulie, who was literally lost in the wilderness, there’s no going back. It foreshadows his disgruntled role in season four, as well as the minimalistic tone the next year will bring.

After finally being rescued by Tony and Bobby, all Paulie can do is look out the car window with a glazed look in his eyes, an old Italian aria playing on the soundtrack. “Sposa son disprezzata” tells of a scorned wife, “faithful, yet insulted.” In this context, it could apply to almost every character on the series.

Of course, there is much more to “Pine Barrens” than what can be explained here. The episode is so rich with subtlety and emotion that a proper analysis could fill an entire book. Conveniently, that book has already been written, and it’s a two-act play called Waiting for Godot. David Chase took influence from the late great Samuel Beckett, and ended up creating one of the greatest masterpieces in television history.