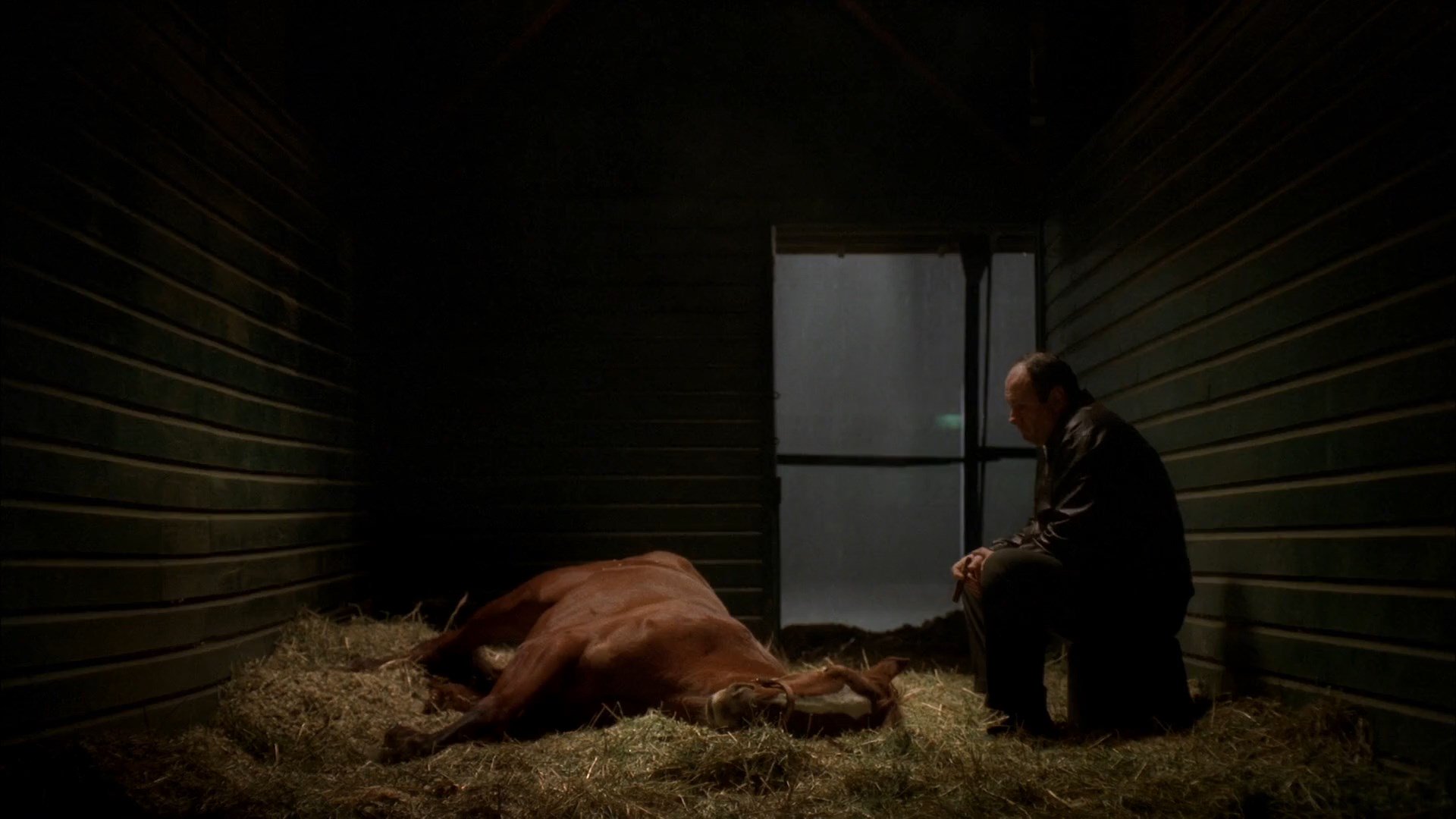 The Sopranos redefined TV in many ways, but perhaps its greatest contribution was in its ability to end an episode with poignancy rather than prolongation. Instead of a cliffhanger, each installment ends with a scene of contemplation, thus emphasizing the series’ self-contained nature. And when it comes to thoughtful conclusions, “Pie-O-My” ranks near the top.

Tony Soprano ends the hour in a stable, puffing on a cigar, comforting Ralph Cifaretto’s sick racehorse amidst the pouring rain. There’s nowhere else he’d rather be. This is Tony at his most vulnerable and unguarded — the real Tony, with absolutely nothing to hide. A small goat joins him in the stable, and the imagery is almost Christ-like. In an episode that amplifies Tony’s own messianic delusions, it’s humbling to see him perfectly at peace in nature, with no pretense.

Contrast this with Adriana La Cerva, who also ends the episode alone, free of all façades. However, instead of inner harmony, she sits on her bed shooting heroin. It’s the only salvation she can find from the extreme hardships in her life, one that includes being an unwilling federal informant and having an abusive, unloving fiancé who doesn’t realize how much danger he’s in.

Season four has felt more subdued — less connected, even — when compared to previous years. Each character has become more isolated than ever before. Tony is becoming a gluttonous tyrant, Uncle Junior faces his RICO trial alone and even Janice Soprano has no one to hinge on, although her newfound independence seems to have her character on an upward trajectory.

Yet no character is more despondent than Adriana. The feds pester her for information at every turn — Agent Deborah Ciccerone remains the most heartless bitch on the series — causing her to sink further into inescapable depression. On an emotional level, Adriana’s barely recognizable from the lovable bimbo she was back in season one.

Her unwilling entanglement with the FBI forces her to avoid coming into contact with anyone mob-related, including her own boyfriend, Christopher Moltisanti. But perhaps that’s for the best — now a hopeless junkie, Chris has also fallen far from the ambitious underdog he was back in season two.

As with the previous episodes, the bulk of “Pie-O-My” is slow-moving and somewhat jumbled, plodding along like its namesake. But similar to Ralph’s racehorse, the episode finishes strong, picking up speed during its artful conclusion.

The aforementioned final sequence features some of the most beautiful imagery in Sopranos history, turning another run-of-the-mill installment into something far more meaningful. During pensive moments like these, we are still rooting for Tony to succeed, in spite of all the terrible things he’s done.

In this instant, for perhaps the first time all series, Tony is alone with us, the audience. We see him for what he can be, and it almost makes all his past atrocities forgivable. It doesn’t matter that he’ll again commit murder and adultery in just a few episodes.