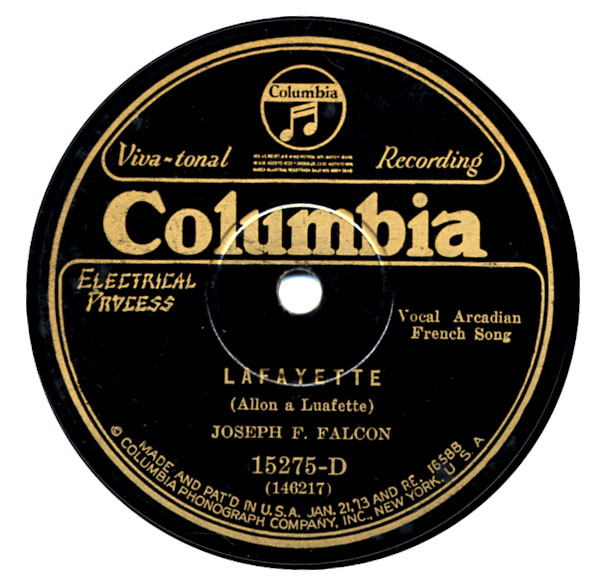 Joe Falcón grew up in Roberts Cove, Louisiana and introduced Cajun music to the rest of the United States with his 1928 hit single “Allons à Lafayette.” The incredibly catchy three-minute song features country-inflected accordion backed by acoustic guitar, over which Falcón sings an Acadian folk lyric about a comically bad relationship. This strange brew of French-American regionalism had a dynamic impact on pop music throughout the country.

49. “Waiting for a Train” by Jimmie Rodgers

It’s easy to forget that the seeds of country music were originally sown with jazz and blues. Jimmie Rodgers’ “Waiting for a Train” combined dixieland clarinet with bluesy guitar to create a downtrodden workingman’s song of deep resonance and relatability, especially in the wake of the 1929 Wall Street crash.

48. “A Spoonful Blues” by Charley Patton

Only one photograph of Charley Patton exists. Nobody knows when he was born. And the surviving copies of his original recordings are in such rough shape that his songs are shrouded in poor sound quality. Nevertheless, Patton remains one of the most innovative and original bluesmen to ever sprout from the Mississippi Delta. “A Spoonful Blues” is trademark Patton: cynical lyrics about drugs, death and man’s many vices; rhythmic acoustic guitar with a surprising emphasis on melody; and gravelly vocals that resonate for miles.

Blind Willie McTell possessed a smooth tenor voice and a syncopated style of ragtime-influenced 12-string guitar. As a result, McTell’s east coast “Piedmont Blues” stood in direct contrast to the foreboding sounds that arose from the Mississippi Delta. “Dark Night Blues” is a fun and upbeat blues rag, which is a real rarity considering its typical dark subject matter.

Was Fats Waller the greater pianist in American history? One listen to the virtuosic “Handful of Keys” is all the evidence you need. This endlessly cheerful stride workout is an astonishing piano showcase that must be heard to be believed.

Charley Patton was a master of melody. Even a slow, lumbering tune like “Pony Blues” is deceptively complex when compared to similar Delta blues recordings of the day. His lyrics, too, are far more poetic than that of your average bluesman. For example, a line like “Baby, saddle my pony, saddle up my black mare/I won’t find a rider, baby, in the world nowhere” is full of symmetry, symbolism and sophistication. Although facts about his life are scarce, one thing is for certain: no one else had the ability to make a song sound simultaneously ancient and modern quite like Patton.

Influenced by blues, vaudeville, country and ragtime, jug bands formed throughout Kentucky and Tennessee in the early 1920s. The Memphis Jug Band was one of the genre’s most famous practitioners, featuring a hodgepodge of harmonica, kazoo, guitar, washboard, washtub bass and, of course, jug. It’s this unique blend of homemade sounds that makes “Stealin’, Stealin'” such a strange yet iconic slice of Americana.

Recorded by the famous Hot Seven in 1927, Louis Armstrong’s “Potato Head Blues” is one of the trumpeter’s most famous songs. A lively instrumental that showcases tremendous polyphony and Dixieland improvisation, “Potato Head Blues” is best known for Armstrong’s stop-time solo that concludes the recording. This is the exact moment where jazz evolves from a genre built on dynamic interplay to one centered on individual performance.

Robert Johnson wasn’t the only musician to sell his soul to the Devil at the crossroads; supposedly, Tommy Johnson (no relation) did it first. Johnson’s lazy brand of Delta blues influenced a wide range of artists, including Howlin’ Wolf, Hank Williams and Canned Heat. “Big Road Blues” is the best example of his lumbering style.

Released in 1923, “Downhearted Blues” was Bessie Smith’s first single. It’s a simple song that bridges the gap between the vaudeville music of the previous decade and the contemporary country blues of the 1920s. In the hands of a singer as gifted as Smith, however, the song also provides the template for all vocal jazz to come, from Billie Holiday to the Boswell Sisters.