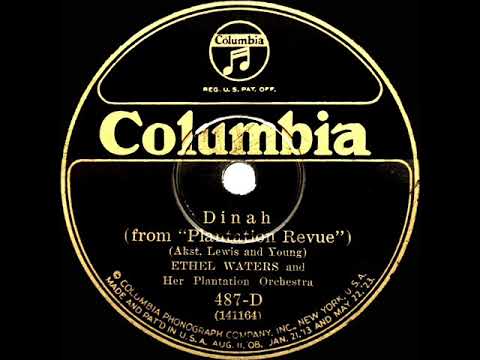 “Dinah” is a dixie ballad with lyrics that pine for a southern belle (“Is there anyone finer/In the state of Carolina?“). It’s somewhat ironic that this was the signature song of the best black woman singer of the decade. Nevertheless, “Dinah” is a brilliant amalgamation of Broadway, blues and swing, with a typically beautiful vocal performance from Ethel Waters that transcends racial boundaries.

The formula for Dixieland’s energetic sound is simple: a raucous combination of cornets, clarinets, trumpets and trombones, which vividly sets the scene for the hot New Orleans nightlife. King Oliver was responsible for creating this blueprint, yet his best music comes when he inverts convention and opts for a more relaxing, after-party vibe. “Freakish Light Blues” is a masterpiece of early jazz that gently sways over a pounding backbeat.

28. “I Wish I Was a Mole in the Ground” by Bascom Lamar Lunsford

Bandleader and orchestral director Paul Whiteman was known as the “King of Jazz.” However, that moniker is somewhat dubious today — Whiteman was one of the earliest and most popular jazzmen of the era, yet he was hardly the most original. His semi-classical arrangements blended jazz instrumentation with pop and dance (i.e. waltz), which connected easiest with upper-class white audiences. Nevertheless, “Whispering” — originally released in 1920 — remains a classic tune regardless of genre and social stature. Even if Whiteman’s orchestra was jazz in name only, it was still responsible for producing some very good music.

26. “I Can’t Give You Anything but Love” by Louis Armstrong

Louis Armstrong was such a great trumpeter that his singing abilities are somewhat underrated … and that’s despite being the most instantly recognizable singer in American history. On the sweet and tender “I Can’t Give You Anything but Love” (originally recorded with his Hot Seven in 1929), Satchmo’s singing takes center stage. He expertly shapes the lyrics to replicate his solos, and vice versa. By the end of the song, the trumpet has become indistinguishable from his voice.

Gertrude “Ma” Rainey began her career touring the American South in a traveling minstrel show. She “discovered” blues music in Missouri in 1902, yet she also took influence from folk, vaudeville and Dixieland jazz — disparate genres from all over the nation. It’s no surprise that her music appealed to every audience: black and white, north and south, urban and country, etc. “See See Rider” is a woozy, jazz-inflected number with funny lyrics and powerful vocals, a hallmark of Ma Rainey’s universal brand of blues.

“Three Women Blues” stands out in Blind Willie McTell’s catalogue due to its extensive use of slide guitar. The song sounds like it comes from the heart of the Mississippi Delta. Nevertheless, all the signature McTell trademarks are there: smooth tenor vocals, syncopated fingerstyle guitar and a sly sense of humor, which all combine to make for one of his very best tunes.

“St. Louis Blues” has an interesting history — W.C. Handy first heard the song in St. Louis, Missouri in 1892, and later published the sheet music in 1914. At a vaudeville show in Baltimore, Maryland in 1917, Ethel Waters became the first woman to perform the song in public. And after being recorded by the Original Dixieland Jass Band in 1921, “St. Louis Blues” became a popular music standard for the next 100 years. Bessie Smith recorded her seminal version of the tune in 1925, which features accordion and Louis Armstrong’s lyrical trumpet as her only accompaniment. It’s a fantastic marriage of blues and jazz, and the finest rendition of this American staple.

This two-part single remains one of Charley Patton’s most apocalyptic creations. Throughout the song, Patton’s acoustic guitar yelps for forgiveness, playing a musical death knell that is at once chaotic and cathartic. Meanwhile, Patton foregoes his trademark full-throated howl for spoken word and relatively soft, melodic singing. Taken as a whole, this is one of the great masterpieces of Mississippi Delta blues.

21. “Jesus Make Up My Dying Bed” by Blind Willie Johnson

The Rolling Stones loved Robert Johnson, Creedence Clearwater Revival couldn’t get enough of Lead Belly and Led Zeppelin was heavily influenced by Blind Willie Johnson. Case in point: “In My Time of Dying” wouldn’t be possible without “Jesus Make Up My Dying Bed.” Built around Johnson’s powerful vocals and virtuoso slide guitar, this is hard-rocking blues that leaves a trail of scorched earth in its wake.