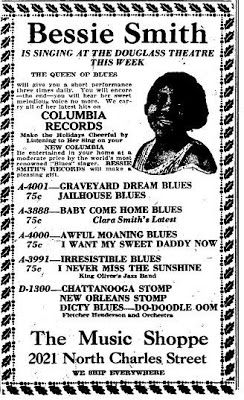 “Graveyard Dream Blues,” originally released in 1923, is one of Bessie Smith’s finest songs. She sings a slow, mournful melody over a lively piano accompaniment one-third of the way between ragtime, vaudeville and jazz, while the humorous tale she tells is about a woman who dreams her husband’s been buried six feet under. Both musically and lyrically, “Graveyard” is a tremendous study in contrasts. It’s no wonder they called Smith the “Empress of the Blues” — her dynamic control over a song is pretty much unparalleled throughout pop music history.

Blind Lemon Jefferson played a freewheeling style of country blues that broke with traditional harmonic conventions. As heard in the opening fanfare to “Black Snake Moan,” Jefferson’s complex acoustic guitar was inimitable. It’s one of the primary reasons why his influence wasn’t as immediate as his contemporaries. However, his unique body of work remains timeless to this day.

Although Duke Ellington’s longest and most fruitful collaboration was with pianist Billy Strayhorn, his most influential may have been with trumpeter James “Bubber” Miley (who played in Ellington’s orchestra from 1923 until his death in 1932). In “Black and Tan Fantasy,” Miley opens his first solo with a memorable, sustained single note and closes his second solo with an excerpt from Frédéric Chopin’s “Funeral March.” Although Ellington is the featured artist, Miley’s inventive muted trumpet completely steals the show.

A proficient yodeler and adept guitar player, Jimmie Rodgers was the original country superstar. “Treasures Untold” is an eerie, slow-paced ballad that strips down Rodgers’ trademark elements to their bare essentials. Despite (or rather, because of) its subverted formula, it remains one of his greatest all-time songs.

The highlight of “Mahogany Hall Stomp” comes when Louis Armstrong holds a single, piercing note for 15 seconds. It serves as a de facto solo in a song full of musical discovery and invention. Recorded in 1929, “Mahogany Hall” already shows tremendous growth from Armstrong’s earliest sessions. In fact, this is where the legendary trumpeter leaves Dixieland behind and begins to chart the future of jazz.

The earliest forms of jazz (or “jass,” as it was originally called) were derived from blues, ragtime and marching band music. Although the three genres were somewhat disparate, New Orleans pianist Jelly Roll Morton was the first artist to successfully combine all three into something new. His “King Porter Stomp,” first recorded in 1924, was an early standard that immediately became a jazz touchstone and gained even more popularity as the decades went on.

An ode to marijuana, “Muggles” is a stoned march into the hot New Orleans nighttime. After a bluesy piano fanfare, the song slowly lumbers along, then picks up tremendous speed before finally winding down for its grand finale. Louis Armstrong delivers several tremendous solos throughout this rhythmic exercise, which happens to be one of his greatest songs.

Blues music traces its roots back to the 1800s, yet the genre’s first commercially recorded song wasn’t released until 1920. Mamie Smith’s “Crazy Blues” remains a touchstone over 100 years after its release — a combination of dizzy Dixieland brass and soulful singing that created a new template for American popular music.

Mississippi John Hurt was always relaxed. His voice never wavered, his guitar playing never faltered and he still resided in his hometown of Avalon, Mississippi when his music was “rediscovered” in 1963. In other words, Hurt’s melodic and unhurried style of music was a perfect representation of the artist himself. Recorded in 1928, “Ain’t No Tellin'” is the most laidback song of the decade.

The fast-paced “Mississippi Boweavil Blues” is one of Charley Patton’s simplest and most effective songs. Buried under the straightforward song structure, however, is a world of complexity. For starters, it’s incredible that “Boweavil” only features one guitar — a true testament to Patton’s one-of-a-kind abilities. Likewise, his raspy vocals fit perfectly within the tune’s rustic framework. Anyone looking to explore Patton’s small yet highly influential discography needs to start here.