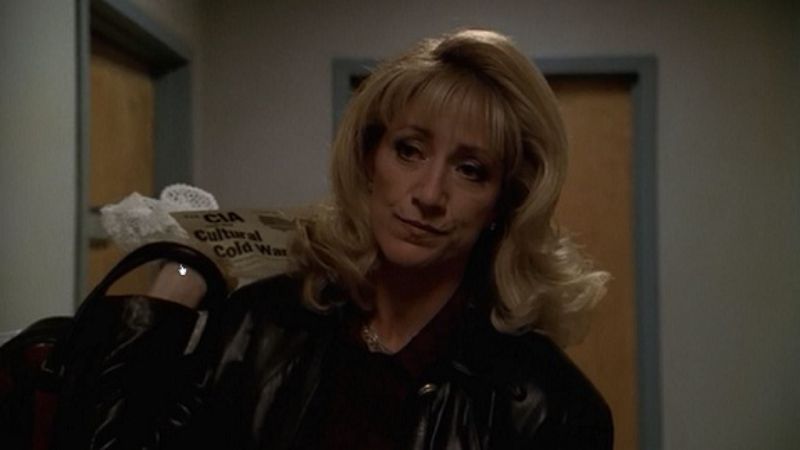 I’ve had plenty of time to let “Second Opinion” sink in, and my overall opinion would be that this is another cornerstone episode of The Sopranos. In fact, it might be the cornerstone, which is certainly a bold claim to make. After second and third rewatch, that claim is hard to deny.

I’ve been using the word ‘cornerstone’ a lot — I literally just used it to describe the previous episode. But I’ll keep using it because I believe that season three is quite possibly The Sopranos’ best. Even though the stakes aren’t high compared to the familial tensions in season one, there have been plenty of episodes in this season that perfectly coalesce all The Sopranos has to offer. Which is why I’d definitely say that “Second Opinion” is a cornerstone, especially for one character in particular: Carmela Soprano.

Just like Dr. Melfi reached a turning point in her own ‘cornerstone’ episode, Carmela finds herself at a turning point here. Throughout the series, she’s been slowly coming to terms with her guilt of being married to Tony. And so she goes to see a psychiatrist to air out her frustrations.

Up until now, Carmela has sorta skirted around the issue that her husband is a mob boss who kills people and fucks anything with a pulse. Remember that opening montage in season two? When Carm kept getting less enthusiastic about cooking lasagna? She’s been fed up with her daily routine for three seasons now, but she hasn’t done anything about it.

The Sopranos often wants us to ask: “Is Tony a good man?” Well, “Second Opinion” wants us to ask, “Is Carmela a good woman?” She remains faithful to a cheating, murderous husband because she loves her kids, but you have to wonder if she loves the money more.

And so Dr. Melfi recommends Carmela to a colleague, Dr. Krakower, whose approach to psychotherapy couldn’t be any more different. Krakower is hard-nosed, and he gives Carmela the hard truth — take the children and leave.

“One thing you can never say is that you haven’t been warned.” I love his brutal honesty. But that’s not what Carmela wants to hear. She wants emotional growth, but she always wants to take the easy way out: “My priest said I should work with him, help him to become a better man.”

“How’s that going?” Dr. Krakower asks in return. The whole exchange is great. For me, this is the cornerstone scene, and Krakower is basically speaking for series creator David Chase himself. He’s literally telling Carmela — telling the audience itself— that Tony is a terrible person, and we’re just as terrible for staying.

However, do I honestly believe that Chase is telling us not to watch his TV show? Of course not. But that’s the beauty of it.

The end of this episode reminds me a lot of the end of “Guy Walks into a Psychiatrist’s Office.” But this time I can’t tell if the tone is upbeat or bittersweet. Tony and Carm’s marriage goes on, but Carm continues to take the easy way out.

Even though she’s aware that Tony’s been giving money to Big Pussy’s widow, which also implies that she’s aware that Big Pussy probably isn’t in witness protection, Carmela is satisfied when Tony finally relents and agrees to donate $50,000 to Meadow’s university. All is forgiven.

It only reinforces the idea that a creeping malaise is slowly beginning to set in. Season three has been a most depressing season, filled with meditations on death and divorce, along with snapshots of rape trauma and domestic abuse. Nevertheless, it’s one of my favorite stretches of television all time.