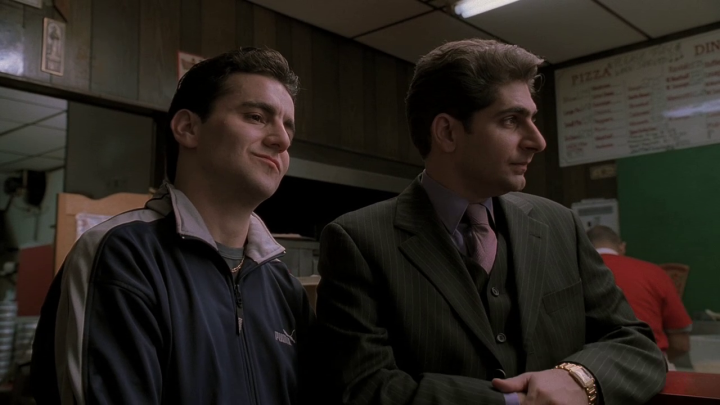 Fortunate Son: “It Ain’t Me”

Some people are born with a silver spoon. However, those people don’t seem to exist in The Sopranos. This is an episode not about sons, per se, but about fathers and mothers and step-fathers and daughters and sons of all kind — biological, metaphorical, surrogate. But not a single fortunate one in the bunch. Just a collection of cross-tie walkers.

The clearest example of a not-so-fortunate son is Christopher Moltisanti. He begins the episode in bright spirits, finally becoming a made man. However, it’s never a good omen to see an ominous raven perched outside the window when you’re taking the oath of Omerta. It has all the makings of a bad moon rising.

The ceremony is far and away the episode’s most memorable sequence, and not only because of that ambiguous bad-luck bird. The whole vibe is indebted to classic gangster films, dating all the way back to The Public Enemy. The atmosphere perfectly conveys the ritualism of a secret rite of passage — I almost felt intrusive just by watching.

Paulie Gualtieri has always been somewhat of a father figure to Chris, or rather, he’s always treated Chris somewhat like a son. Either way, he expects Chris to pay his money on time, and gets angry when he doesn’t. Animosity between the two starts to build.

Of course, Chris has been a foolhardy failure since day one, constantly struggling to live up to the expectations of the father figures that surround him. “It was that fucking raven,” he complains to Adriana. He’s getting hammered by the books (meaningless field goals making a mockery of his machismo), and so, desperate like a junkie, he robs a benefit concert at Rutgers.

A stick-up should be beneath a newly-christened “made man” like Christopher, but the one who tips him off about the job is another unfortunate son by the name of Jackie Aprile, Jr.

You might remember Jackie Jr. from season two, a young punk trying to get into the family business (R.I.P. Uncle Richie). Yet the move to main cast hasn’t made him any more sympathetic — he’s now the biggest douchebag on the series.

Last episode, Tony struggled coming to terms with his mother’s death because maybe he “hadn’t been a good son.” In Tony’s defense, he tried the best he could; his mother just happened to be extremely unloving and nihilistic. Jackie Jr., on the other hand, is definitely not a good son. He drops out of med school (against his dead father’s wishes) and repeatedly acts arrogant toward his still-grieving mother, Rosalie. Not to mention the fact that he one day hopes to take the oath of Omerta himself.

At this point in the season, the focus isn’t so much on Jackie Jr., but rather the parental figures around him. Rosalie can’t bear to see her son act this way, while her new boyfriend, Ralphie Cifaretto, isn’t showing much concern (Ralphie is a “Douchebag of the Year” contender himself). And Tony — who looks after Jackie Jr. the same way Paulie looks after Christopher — is trying, unsuccessfully, to set Jackie Jr. down the right path.

But as The Sopranos has shown time and time again, people never change.

At home, Tony alienates his daughter due to his intolerance. During therapy, he and Dr. Melfi are getting down to root causes for his panic attacks. It results in another flashback to his early childhood, and even though the sepia-toned mise-en-scène is practically stolen from The Godfather, it doesn’t take away from the scene’s overall elegance.

Dr. Melfi deduces that Tony’s recent panic attack was brought about by eating gabagool, as opposed to a combination of deeply-entrenched racism and Uncle Ben’s rice. She recalls that Tony’s initial attack back in the pilot occurred while he was grilling meat, therefore connecting the two incidents.

This newfound revelation has a Proustian effect, triggering a repressed memory of when a 10-year-old Tony witnessed his father slicing off the butcher’s fingers. However, it’s not the violent memory that is the root cause of all his anxiety; rather, it’s the fact that his mother was turned on by the free meat that causes the young Tony to pass out and crack his head on the table.

Tony’s been an unfortunate son his whole life. It just took the death of his mother and three years of psychotherapy to finally realize it.

However, the most unfortunate son of all is AJ Soprano. He’s privileged in the fact that he never needs to worry about money or material goods, but he’s constantly neglected by both parents. How many times throughout this episode is AJ asked to leave the room so others can talk in private?

Sure, Anthony’s an annoying, moody teen, but that shouldn’t be enough to make him pass out during freshman football practice. As Tony learned in a previous episode, the Soprano anxiety attacks are more genetic than previously thought.

Like father, like son. Chris, too, ends the episode ignoring the incessant ring of his phone, instead curling back into bed and hiding underneath the covers. It’s not a good installment, mentally speaking, for any member of The Sopranos. But it is a good episode, critically speaking. And as a critic speaking, I’ll have you know that “Fortunate Son” is completely worthwhile.