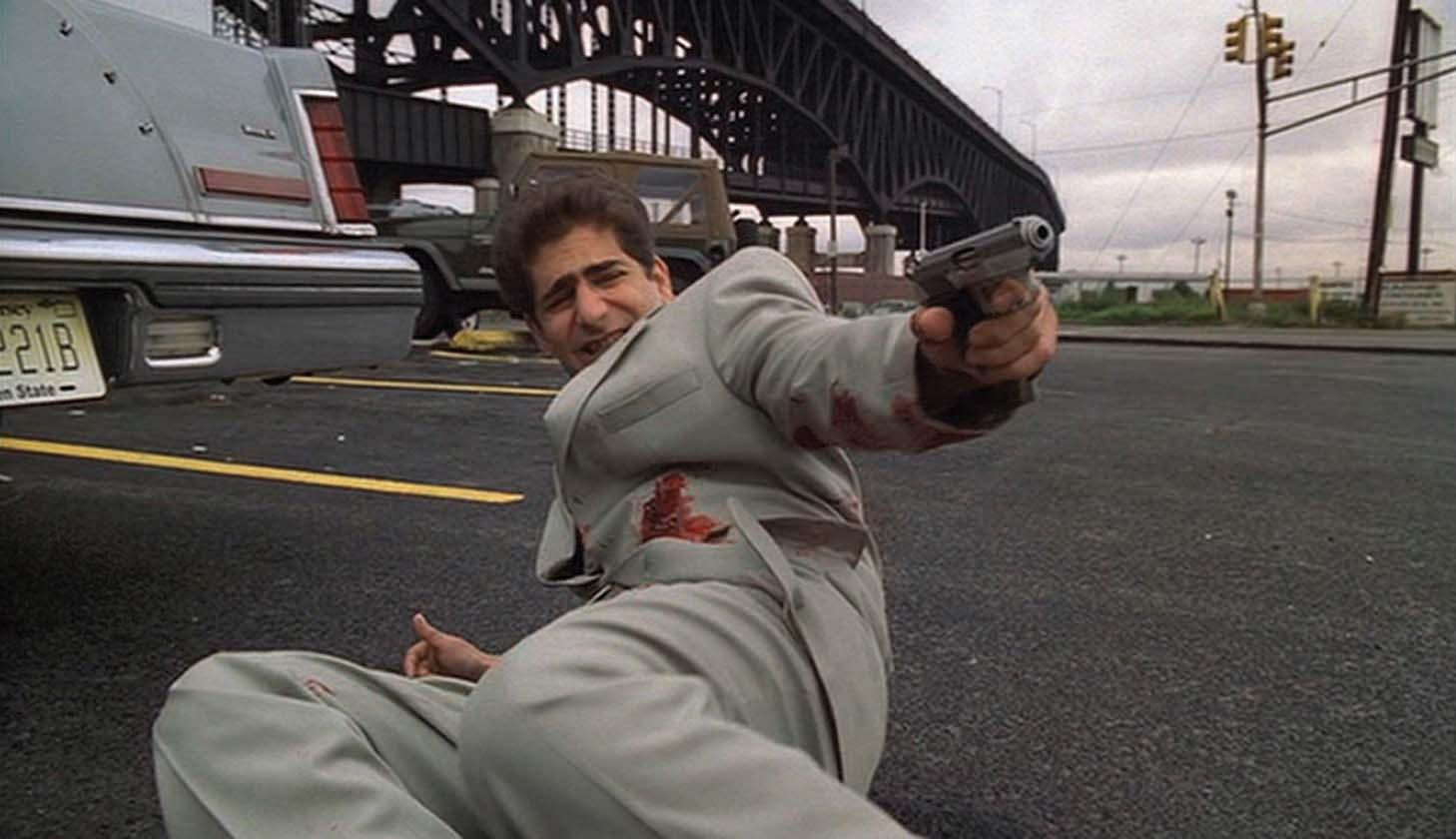 Upon first viewing, “Full Leather Jacket” is the most memorable and shocking episode of season two thus far. A main character has just been shot, and The Sopranos leaves us on a surprising and unexpected cliffhanger.

Upon repeat viewing, however, Chris Moltisanti’s ambiguous fate at the end of the episode loses drama because we already know that Chris doesn’t die. The next episode focuses on his recovery, and he’ll be back to his old self by season’s end.

I analyzed the importance of Sopranos endings in my review of last episode, but I think the conclusion of “Full Leather Jacket” deserves to be discussed as well. Aside from its memorable final scene, The Sopranos is a show that rarely utilizes cliffhanger endings, most of the time opting for a note of poignant ambiguity.

That’s why “Full Leather Jacket” feels like such an anomaly. Even though the unresolved ending is a great scene by itself, it loses importance in the show’s grand context.

Up until its climactic final moments, “Full Leather Jacket” abounds in ultimate “nothing happens” fare. Carmela Soprano tries to convince her neighbor, Jean Cusamano, to help Meadow get into Georgetown (Jean’s sister — who doesn’t even know Meadow — works in the admissions office). Meanwhile, Richie Aprile gives Tony a prized leather jacket that Tony has no intention of wearing.

The episode features great comedy, which is why the seemingly unimportant storylines remain so compelling. It’s not a big hour for Tony (during one therapy session, he even refuses to speak), but it’s a necessary showcase for Carmela and her conflicted morals. Her dual personas of mob wife and suburban do-gooder — and her struggles with balancing both — are far more interesting than they initially appear.

Likewise, Richie Aprile doing Richie Aprile shit (i.e. continuing to threaten Beansy) is always good for some cruel laughter. It’s amazing how funny he’s become, especially considering the atrocities we’ve seen him commit. Then again, his dialogue works so well because it contains the scathing undertone that he might kill you at any second.

Chris, too, has some hilarious one-liners, building on the amiability he’s gained over the last few episodes. But just when it seems like he’s finally about to turn his life around — no more drugs, no more Hollywood, finally proposing to Adriana — Chris is ambushed in the street by Matt Bevilacqua and Sean Gismonte.

Matt and Sean’s stupidity has provided several laughs throughout the season, but they’ve largely been relegated to the background. Now that they’ve finally served their purpose — two dime-store hoods desperate to be recognized — you have to wonder if their inclusion on the series was necessary at all. They exist purely to serve the plot.

And they don’t even serve it well: their plan to kill Chris as a favor for Richie is even dumber than they are. It makes little sense from a storytelling perspective, other than to set future events in motion. A last-minute sub-plot providing subtle insight into their personal lives (basically, they’re fed up with being everyone’s doormat) isn’t enough to earn our sympathy.

Nevertheless, the unexpected shootout provides an exciting rush of violence that stands in stark contrast to the rest of the episode’s easygoing nature. The sequence itself is well-executed — Chris is left fatally wounded in the middle of the street, able to kill Sean with the last ounce of his strength.

We close with Chris at the hospital in critical condition, as Tony tearfully repeats, “How could this happen?”

Tony’s disbelief is the perfect capstone to such a plot twist. Likewise, the sound of Chris’ respirator — no music, just the electronic rhythm of a life hanging in the balance — makes for a haunting soundtrack.

What truly takes away from the cliffhanger’s power, however, is the scene that takes place between the shootout and the hospital bed — Matt asks Richie for protection and is immediately chased out with a baseball bat. Even though this brief detour lasts less than a minute, it provides a hilarious tonal shift between two moments of tragedy, undercutting them both as a result.

Ironically, the shocking cliffhanger undercuts how funny the rest of the episode is. What should’ve been another Sopranos comedy masterpiece goes from “nothing happens” to “something happened” far too quickly. And at only 42-minutes, perhaps the episode could have benefitted from some extra padding.

Or perhaps the shortened run-time helps maintain the episode’s shock value on rewatch. Even after multiple viewings, Matt and Sean’s ambush still feels like it comes out of nowhere, partly because “Full Leather Jacket” is 10-minutes shorter than the average Sopranos episode.

Cliffhanger or not, this is still another well-rounded episode in a season full of them. Aside from the rushed execution at the end, the installment gives us plenty to think about.