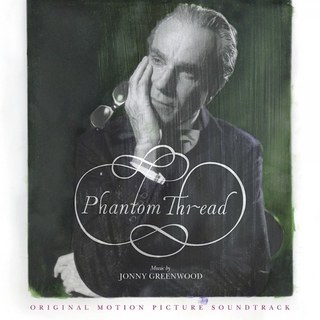 Greenwood, the Radiohead guitarist, has crafted a surprising solo career as one of the preeminent composers of postmodern classical music.  His collaborations with PTA have all been individual works of art, transforming already great films into masterpieces.  Through it all, his influences have been made clear—Greenwood has closely studied the works of experimental vanguards like Krzysztof Penderecki, Olivier Messaien, Gyorgi Ligeti and Steve Reich.

Greenwood’s distinct strain of avant-garde music has been both surprising and superb, but Phantom Thread is where I believe he truly finds his own voice.  Of course, the score must cater to the film—There Will be Blood was primal, barren and violent; The Master was minimal, dizzying and whirring; Inherent Vice owed much to old Hollywood strings, and was more of a curated soundtrack than individual film score (absolutely worship Chuck Jackson’s “Any Day Now”). Phantom Thread, what I know about it, is a stately period drama taking place in 1950s London with Daniel Day-Lewis (in his final performance) as an obsessive dressmaker.  Greenwood’s score reflects all those things, but remarkably stands on its own.

There are dashes of Charles Ives, Peleas et Melisande, Bill Evans and Bartok, along with the usual suspects (the fifth movement of Quartet for the End of Time is always a reference point), but it is all Jonny Greenwood.  This is his longest score to date, and it flows dreamily past over the course of an hour.  In fact—much like the film, I assume—it gets better as it goes on.    Atonal strings ebb and flow while subtle melodies form and build, resulting in moment after moment of off-kilter beauty. It all comes together on the piano-led closer, “For the Hungry Boy.”

The sound of Phantom Thread is not as vast as There Will be Blood or The Master.  Instead, it is refined and elegant, chamber-style (despite its large 60-piece backdrop of strings, piano and occasional Ondes Martenot), and I can only assume that the film will become something of a modern-day Barry Lyndon.

With this newest release, I can safely say that Jonny Greenwood is one of our modern-day classical elites. If you don’t agree, you can should at least admit he is on the same level as Herrman, Rota and Shore.