Uncle Junior, starting to succumb to cancer, has placed all his hope in Dr. John Kennedy, who is recommending more surgery. Tony urges Junior to seek a second opinion. A tumor board review is called — several doctors convene and recommend that Junior undergo chemotherapy.

This gave me the idea to call up a close friend, Frances Ha, to discuss the merits of “Second Opinion” and Sopranos season three as a whole.

COLIN HART: “First off, Frances, what are your overall thoughts on the episode?

FRANCES HA: “Thanks for reaching out, Colin, always a pleasure to see you again.   I’ve had plenty of time to let ‘Second Opinion’ digest, and my overall opinion would be that this is a cornerstone — maybe the cornerstone — episode of the entire series.”

C: “That’s a bold claim to make, but I find that I agree with you.  I’ve been using the word ‘cornerstone’ a lot — I literally said it about the previous episode, ‘University.’  But I’ll keep using it because I believe that season three is quite possibly The Sopranos’ best. Even though the stakes aren’t all that high, there have been plenty of episodes in this season that perfectly coalesce all The Sopranos has to offer.  I’d definitely say that ‘Second Opinion’ is a cornerstone episode.”

FH: “Wow, coalesce, huh? That’s how you use that journalism degree. This is certainly a cornerstone episode for one character in particular, and that’s Carmela. Just like Dr. Melfi reached a turning point in her own ‘cornerstone’ episode, Carmela finds herself at a turning point here. Throughout the series, she has been slowly coming to terms with her guilt of being married to Tony. More than anything, ‘Second Opinion’ is Carmela’s journey to — ”

FH: “I find it touching that Corrado puts so much stock into the name of his surgeon, Dr. John Kennedy. Like you have said so many times in your review, Colin, The Sopranos loves to examine the role of the elder generation in the modern age. Another of the show’s favorite themes is that the good days are over, and only clouds of cynicism — ”

C: “Tony even said it in the pilot.  ‘Lately I get the feeling that I came in at the end.  The best is over’ or some shit like that.”

FH: “Exactly. A creeping malaise that is slowly starting to set in. Uncle Junior’s trust in Dr. Kennedy reflects that ‘wishing for the golden age’ attitude.”

C: “Good point, Frances, and I’m glad you’ve been reading some of my writings.  But I want to go back to what you were saying before I interrupted you. You were about to say something about Carmela and how important her role in this episode is.”

FH: “Yeah, asshole. So up until now, Carmela has sorta skirted around the issue that her husband is a mob boss who kills people and fucks anything with a pulse. Sure, she’s getting increasingly fed up with Tony — ”

FH: “She’s been fed up with her daily routine for three seasons now, but she hasn’t done anything about it. Colin, you always talk about ‘Is Tony a good man?’ Well, I want to ask, ‘Is Carmela a good woman?’ She remains faithful to a cheating, murderous husband because she loves her kids, but you got to wonder if she loves the money more.”

C: “Wow, that’s a great way of looking at it. Dr. Melfi recommends Carmela to a colleague, Dr. Krakower, and their approaches to therapy couldn’t be any more different.  Krakower is hard-nosed and he gives Carmela the hard truth — take the children and leave.”

FH: “‘One thing you can never say is that you haven’t been warned.’ I love that brutal honesty. But that’s not what Carmela wants to hear. She wants emotional growth, but she always wants to take the easy way out.  ‘My priest said I should work with him, help him to become a better man.’”

C: “‘How’s that going?’ That whole exchange is great. For me, this is the cornerstone scene. This therapist, this Krakower, is basically speaking for David Chase himself. He is literally telling Carmela — telling us the audience — that Tony is a bad man and we are just as bad for staying.”

FH: “You honestly believe that? That Chase is telling us not to watch the show?” 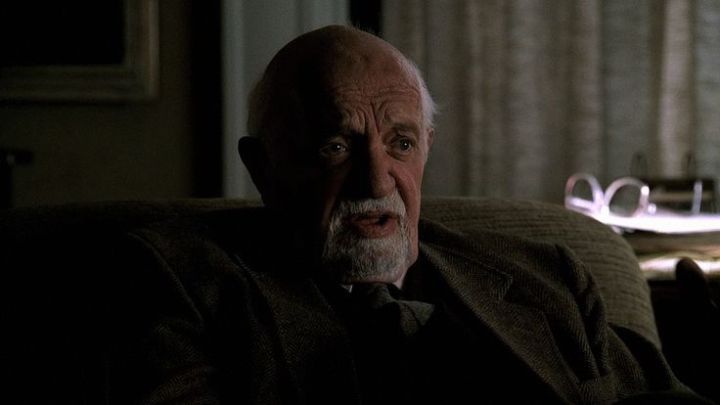 C: “The ending of this episode is really great — it reminded me of the ending of ‘Guy Walks into a Psychiatrist’s Office.’  But this time I couldn’t tell if it was upbeat or bittersweet. Tony and Carm’s marriage goes on, but Carm continues to take the easy way out. Carmela is satisfied when Tony finally relents and agrees to donate $50,000 to Meadow’s university.”

FH: “And Carm’s now aware of the money that Tony’s been giving to Angie Bonpensiero, Big Pussy’s widow.”

C: “And Tony’s aware that Angie’s been taking advantage of their little deal.”

FH: “And I think Angie’s aware — and Carmela too — that Big Pussy isn’t in witness protection.” 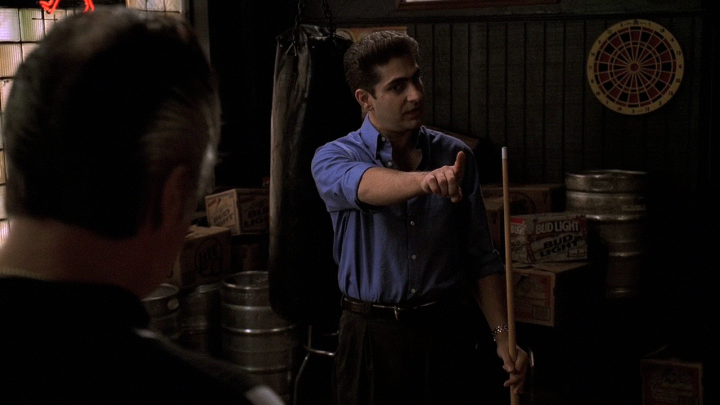 C: “Frances, I like how you mentioned earlier the creeping malaise that is starting to set in. Season three has been a most depressing season, filled with meditations on death and divorce, not to mention rape trauma and domestic abuse.”

FH: “Yeah, season three is definitely gloomy, but it’s one of my favorite stretches of television all time, and I know you share this sentiment. The only levity in ‘Second Opinion’ is Chris being subjected to random frisks by Paulie.”

C: “And even then, we get more gloominess, at least for Chris.  ‘I guess you could call that a dick.’”

FH: “Thank god every bromance can be mended by a Big Mouth Billy Bass.”

Colin: “Yeah, but not for Tony, who’s had a couple bad experiences with talking fish.”

FH: “Colin, how about the part when Carmela is in Melfi’s waiting room and looks at the statue just like Tony did in the pilot?”

C: “Oh, I nearly forgot! That whole shot is fantastic — Tim Van Patten echoing David Chase’s opening shot of the series, except with Carmela instead of Tony.”

FH: “Colin, I’ve read your reviews, but have you even watched my movie?”

C: “Because I love your name. And I admire Greta Gerwig and, to a lesser extent, Noah Baumbach.”

“The man’s got two speeds: mopey and yelling, when he’s here.”

“That’s why they invented microwaves.  For inconsiderate husbands.”

“Anthony is a cunt hair away from owning all of North Jersey.  And I am that cunt hair.”

“Look, I don’t deny that Paulie can be a little…quirky.  He always has.”

“You told me he’s a depressed criminal, prone to anger, serially unfaithful.  Is that your definition of a good man?”