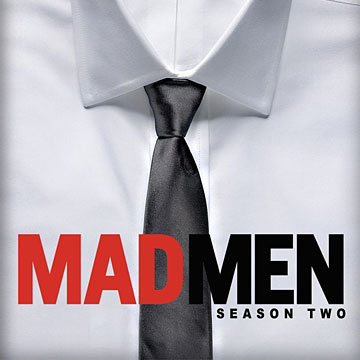 Season two of Mad Men is very much a transitional year for the iconic series. Just like the debut season, it takes a while to get going, but unlike that first installment, the elegance and cultivated sense of style aren’t enough to get us through the slog.

But perhaps “slog” isn’t the right word to use. Mad Men season two is only inferior when compared to the rest of Mad Men. If you look at the state of TV circa 2008, then you’ll find that the sophomore year of Matthew Weiner’s workplace drama retains its spot at the top of what television has to offer.

Nevertheless, the thirteen episodes of season two digress dangerously close to what can be considered daytime soap. Donald Draper’s tryst with Bobbie Barrett — and Betty Draper’s subsequent reaction — is a low-point for the entire series. Not far off is Peggy Olson’s burgeoning friendship with the local priest, which is as boring as church itself.

The central focus of season one was the mystery of Don’s past, an element that provided an intriguing through line in an otherwise plotless drama. That aspect takes a back seat in season two, thus making Don and Betty’s crumbling marriage into the main storyline. Your interest level will be entirely dependent on Don’s charisma (still got it) and January Jones’ abilities as an actress (nonexistent).

What we really want to see is the day-to-day goings-on at Sterling Cooper. Everything else on the series is secondary when it comes to advertising. That’s because life at the agency is fun, fast-paced and full of banter. It’s where we want to be, and that’s why some of the best episodes of the season feature Sterling Cooper as the primary setting.

Yet most of the season features an equal split between work and home. Although Mad Men does a fine job expanding its ensemble in year two, the core characters are still what make this world go round.

Mad Men is a show that often feels like it’s going nowhere, and nowhere is this more evident than in season two. Problems arise, yet nothing is really solved. By the end of the season finale, that’s still the case, but just like with season one, the slow-burn leads to a stunning payoff that didn’t seem possible.

That’s the beauty of Mad Men: the ends justify the means. We spend the entirety of the season building up to moments that we didn’t even know we were building up to, and this makes the emotional weight add up to far more than the sum of its parts.

Even though I’ve spent this entire review detailing the negative aspects of the season, I’d be remiss if I didn’t note how masterful it truly is. The transition from good to great is subtle, but it’s there — I’d say that the ending of “The Inheritance” (the use of “Telstar,” in particular) is where Mad Men turns the corner. The final three episodes make for a stunning conclusion that takes Don, the audience and the show itself out of its comfort zone in ways that no one could’ve expected.

From season three onward, Mad Men will rightfully stake its claim as one of the greatest TV shows of all time. But without the careful groundwork laid in the first two chapters, none of that would be possible.