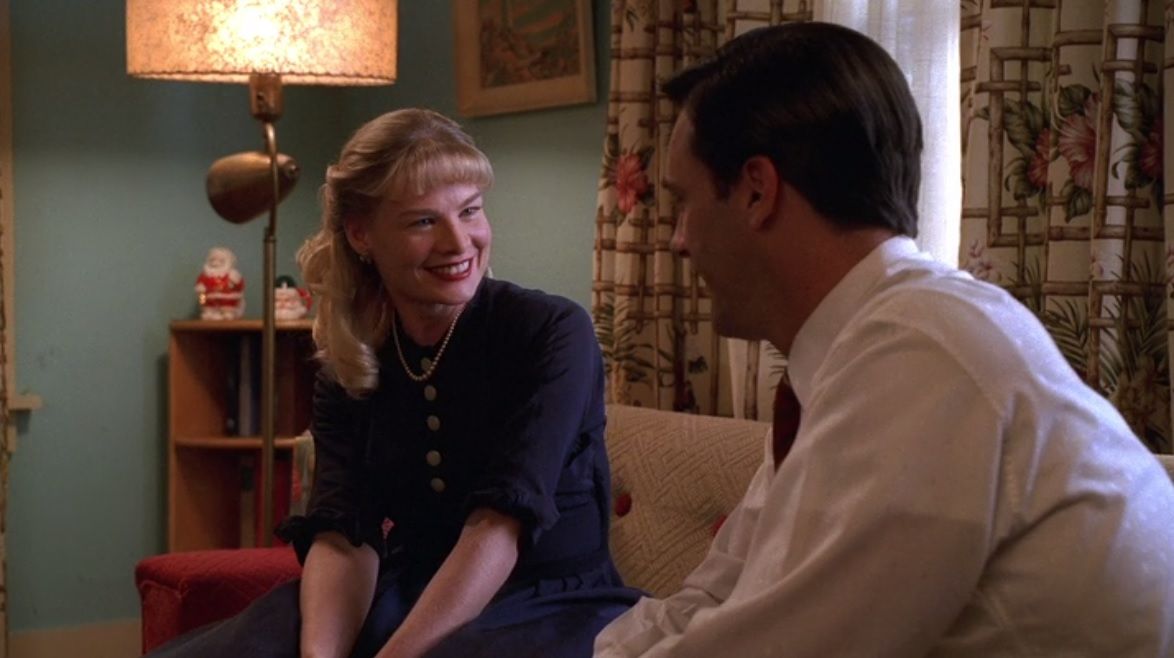 “In the Hall of the Mountain King”

Don Draper has spent the entire series — and his entire life — being dishonest. To his family, to his coworkers and to himself most of all. In fact, he’s made a career out of it. But there is one person with whom he can be truly honest: the widow of the man whose identity he stole in the Korean War.

You would think that Anna Draper would harbor some resentment toward Dick Whitman, but they’re actually the most compatible couple on the series. That’s because their love is platonic — two lost souls who met so that both of their lives could be better.

He pays her a much-needed visit this episode, which makes for a very rewarding payoff to last week’s mysterious phone call.

Mad Men is often at its best when the mystery of Don’s past takes center stage. The original Mrs. Draper happens to be the last remaining link to Mr. Whitman, and “The Mountain King” is the first time that Don seems to be at peace with both personas. It’s a fantastic episode.

Through use of flashbacks (Dick and Anna used to spend every Christmas together) and some of the best dialogue in the series (“I have been watching my life. It’s right there. I keep scratching at it, trying to get into it. I can’t”), Don’s California odyssey remains extremely compelling and emotionally satisfying despite being disconnected from the events happening on the east coast. It’s the first time we see him truly comfortable in his own skin.

In fact, the storyline directly parallels the end of the series, where Don finds himself on a similar westward quest for meaning. The allure of a new life has always been Don’s greatest ambition, but it’s also been his greatest fault. Although I can admire the fact that he’s now introducing himself as Dick Whitman when shopping for Anna’s groceries, it’s still disappointing to know that he’s completely abandoned his family back home. Perhaps Anna says it best: “The only thing keeping you from being happy is the belief that you are alone.”

Don ends the episode cleansing himself in the crashing waves of the Pacific Ocean, which isn’t too far removed from the final frames of the series.

Don’s absence doesn’t have much bearing on the events happening in NYC. Life goes on without him, as evidenced by Roger Sterling and Bert Cooper agreeing to sell the agency to Putnam, Powell & Lowe. The impending merger sends the office into a frenzy, yet it only serves as a backdrop for the personal struggles faced by our characters.

For Joan Holloway, struggle is an understatement — her fiancé, Greg, rapes her in Don’s empty office. Aside from a similar situation in season five, it’s easily the most abhorrent moment of the series, yet for a TV show intent on making a major societal statement, it’s unfortunately appropriate.

Mad Men is all about the search for personal identity, and that also means underscoring the harsh realities of gender identity in the early 1960s. Joan didn’t marry for love; she married because she felt she had to. By conforming to cultural norms, she’s made a terrible mistake.

This is directly contrasted with Peggy Olson, who has already birthed a child but doesn’t give a damn about romance. She delivers another successful advertising pitch, and finally receives her very own office as a result. Her hard work is finally paying off, yet her hard journey to get there can’t easily be forgotten.

The character most affected by Don’s absence is Betty, who struggles to raise the kids on her own. As a way to keep herself amused, she resorts to ruining other people’s marriages instead. Betty finally gets called out for what she is: a terrible person.

But we can’t really blame her for everything, as Don’s distance (both physical and emotional) is largely responsible for the spiteful woman she’s become. In fact, you could say that Betty made the same mistake as Joan, only she realizes it nine years too late. By marrying a lost soul, she came to be a lost soul herself.

Don’s relationship with Anna, on the other hand, is the emotional heart of the episode. It shows that he is capable of opening up, that he can change as a person, no matter how defiant he may be. The conversation scene on Anna’s front porch, in which they discuss these topics at length, is one of the best exchanges of the series.

It’s also what the final scene of the episode, replete with baptismal imagery and George Jones’ “Cup of Loneliness,” visualizes so well. There’s a sense of finality in watching Don wade into the lonely waters, called out of darkness, a new life to begin.

However, the final scene of the series — of which the ending of “The Mountain King” shares several thematic similarities — suggests that maybe people don’t change after all. Yet if you watch Mad Men all the way to the end, then you’ll know that two things can both be true at once.