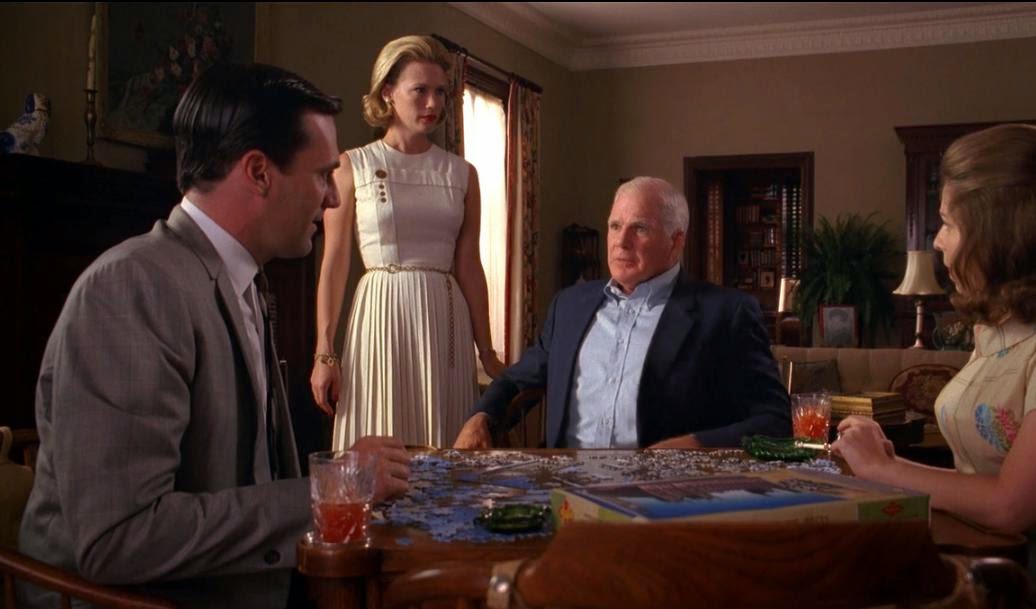 “I Hear a New World”

The ending of “The Inheritance” is the exact moment when Mad Men goes from a (very) good TV show to a truly great TV show — Don Draper sitting in a plane bound for Los Angeles, smoking a cigarette, looking pensively out the window, the whirring melody of “Telstar” by The Tornados filling the soundtrack as the sun strikes his face.

It’s one of the greatest songs in music history, and also one of the greatest musical cues in TV history, yet the two aren’t mutually exclusive. “Telstar” represents a fresh start, a new beginning, a broadening horizon, not only for Don Draper but for Mad Men itself. It’s a true turning point for the series — Mad Men is now ready for takeoff.

But even though it’s a perfect marriage of sound and vision, the greatness of “Telstar” can’t hide the fact that “The Inheritance” is one of the most inconsequential episodes of the series.

Don spends most of the episode emasculated. He accompanies Betty on a visit to see her ailing father, Gene, who recently suffered a stroke. Forced to keep up appearances with his estranged wife, he’s also forced to endure the harsh criticisms of his father-in-law. No wonder he leaves for Los Angeles at the end of the episode. It’s why “Telstar” is such a triumphant conclusion.

However, everything that comes before pales in comparison. As if spending time with Betty’s extended family wasn’t bad enough, “The Inheritance” also decides to bring back Glen Bishop, the weird 11-year-old kid who lives down the street. His strange, sexual obsession with Betty is awkward as fuck, but Betty makes it even weirder by taking comfort in his perverted company.

Of course, Betty is put in some very strange psychological situations this episode, so we can’t really blame her. Her senile father grabs her tit, her estranged husband rubs her back and an 11-year-old boy holds her hand. In the meantime, she cries in the arms of her childhood nanny, and re-elopes with Don on the floor of her childhood bedroom. It’s a surreal sequence of events, but I don’t think it was intended as such. A better way to describe it would be ‘sloppy.’

For the most part, “The Inheritance” sets up season two’s endgame by taking care of all the superfluous sub-plots that have been left by the wayside. That includes Paul Kinsey acting fake “woke” and Pete Campbell clashing with his high-society mother. In comparison to Betty and Glen, it’s a breath of fresh air. But still, it’s nothing to write home about.

Apparently, in order for us to have a Don-dominated conclusion, he needs to first be treated as an afterthought. Considering the greatness of the final three episodes, it’s a necessary trade-off.

When the whooshing sound of “Telstar” finally graces the soundtrack, it’s as if we’ve been set free. Like Don, we’re whisked away to new horizons, graciously leaving all our troubles behind. As I said before, this is the exact moment when Mad Men goes from good to great.

It’s also the exact moment “The Inheritance” goes from bad to good.