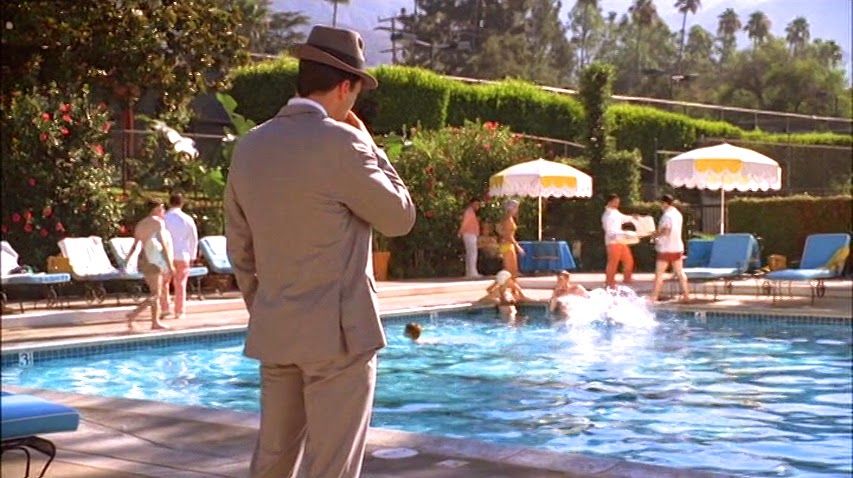 Mad Men is one of the rare TV shows that excels when it steps outside of its comfort zone. Even though Madison Avenue circa 1962 is a brilliant world unto itself, the drastic change in setting featured in “The Jet Set” comes as a breath of fresh air.

Season one of Mad Men relied on style and grace, but in season two the elegance has grown stale. Don Draper badly needed a change of scenery, and he arrives in Los Angeles like a conquering hero, standing by the hotel pool with a newfound look of determination in his eyes.

Donald Draper in California, what a sight to behold. It changes him. It’s where he belongs. And when he puts on those aviator sunglasses … hoo boy … it’s game over.

“The Jet Set” uses its west coast setting like a brand-new character. The colors are striking, the score is exotic and the people Don meets are unlike any he’s ever experienced. Even though he’s supposed to be there on business, he quickly falls in with a group of wealthy European nomads, embracing their extemporaneous attitude. The fact that he lost his luggage makes it even easier for him to abandon all responsibilities. He doesn’t have to pack up and leave; all he has to do is leave.

Mad Men is also at its best when it delves deep into the nature of Don’s identity, an element that has been conspicuously absent for long stretches of the season. Having been seduced by the 20-year-old Joy, he’s content to just go along for the ride and see where the road takes him — a nameless stranger in a strange land.

It’s certainly an affair to remember — for the first time in his life, Don literally follows his Joy. Their rapturous sexcapades are therapeutic, allowing him to finally set aside material desires, and pursue the pleasures that he needs.

After a few days, however, he quickly comes to the realization that the jet set life is not for him. It was fun while it lasted, but there are still plenty of other things weighing on his mind. He dials a number, and makes a date for later by phone: “Hello, it’s Dick Whitman.”

Director Phil Abraham delivers a masterful closing scene — the camera pulls back from a shirtless, sun-tanned Don, confidently striking a familiar pose on the couch. Johnny Mathis’ nostalgic “What’ll I Do?” fills the soundtrack, and a delivery man leaves Don’s misplaced suitcase on his front porch back home in New York.

But Don Draper’s not there to answer to the door. He’s now Dick Whitman, finding momentary inner-peace on the other side of the country.

As Don goes off the grid in sunny California, the winds of change are also sweeping back east. Peggy Olson (finally) gets a modern-looking haircut, Kurt (one of the new hires from the season premiere) openly admits to the office that he’s gay and — perhaps most surprising of all — Roger Sterling and Jane Siegel decide to get married.

After the 10 previous episodes had fallen into a stagnant groove, it’s amazing how quickly things have evolved. These sub-plots are minor in comparison to Don’s adventures out west, but they make up a microcosm of the extensive cultural revolution just around the corner.

Yet the biggest change of all, as far as we’re concerned, is Duck Phillips’ unexpected power play toward Roger. Passed over as partner, Duck falls off the wagon, and arranges a secret meeting to sell Sterling Cooper to the British advertising firm he used to work for. A merger is imminent, and a new era is dawning.

It can be fascinating to watch a TV show transform before our eyes. That’s especially true of Mad Men, which has built up a dreamlike consistency over the last two years.

Everything about “The Jet Set” is different than the series that came before, opening up a new world of possibilities. Last episode’s use of “Telstar” was the moment when Mad Men went from good to great, and this installment fully delivers on that promise.

When you sit back and see where the road takes you, sometimes there’s no turning back. It’s best to just embrace what comes next.