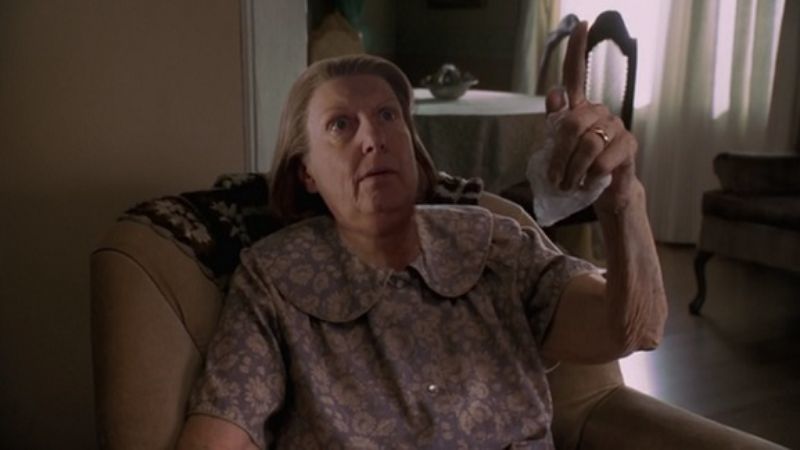 “Proshai, Livushka” often feels like several different episodes rolled into one. A wide variety of micro-moods range the hour — from cringe comedy to somber tragedy.

Off the set, The Sopranos lost actress Nancy Marchand, age 71, who died of lung cancer in 2000. Her portrayal of Livia Soprano provided a wholly unique perspective to the gangster genre, and was crucial to the show’s early success. If Tony Soprano was the ultimate anti-hero, then his mother was the ultimate anti-villain. Ever since the beginning, Livia held a dominating presence, and with Marchand’s untimely passing, series creator David Chase was forced to rewrite much of season three.

The original seasonal arc was to have Tony attempting to reconcile with his mother as she testifies against him in court (hinted at during the season two finale). There are plenty of “what if” scenarios for how that might’ve played out, but the revision ultimately became one of The Sopranos’ best seasons. Livia’s offscreen death was written into the second episode, and the mournful mood permeated throughout the remainder of the series.

The first two episodes of season three are somewhat scrambled and experimental, combining to form an off-kilter prologue that makes up for lost time. “Mr. Ruggerio’s Neighborhood” is a musical number told from an outsider’s perspective; “Proshai, Livushka” is a piece-mover with no set destination.

As a result, they can feel a little choppy and uneven. There are even a couple questionable directorial choices. Despite that, the odds and sods are endearing in context of The Sopranos’ usual ascetic aesthetic.

“Proshai, Livushka” begins with Tony passed out on the kitchen floor. The scene then plays in reverse, quickly showing the events leading up to his latest panic attack in VHS rewind, and then restarting from the beginning. It’s a disorienting camera-curveball from director Tim Van Patten, humorously fitting within the context of the scene. However, the uncharacteristic flashback to “I Dream of Jeannie Cusamano” later in the episode is a little harder to defend.

The most polarizing style choice of all, no doubt, is the decision to use CGI to place Livia’s head onto a body-double for one final scene. It occurs toward the beginning of the episode, and features a Tony/Livia conversation that uses cut-and-paste clips from prior episodes. Livia’s disembodied head delivers several of her nihilistic catchphrases: “I wish the Lord would take me now” and *disgusted grunt*

The result is almost cringeworthy — a rarity in The Sopranos. Upon further review, however, the visual editing is pretty good by 2001 standards. In the end, it’s not so much an issue of cinematic ethics; it’s a question of whether the scene is even relevant at all.

Nevertheless, these minor mishaps are forgivable when considering the overall greatness of the episode. When the characters find out that Livia has died, everything else is put on hold, and “Proshai, Livushka” soon becomes a spooky meditation on death in the vein of “From Where to Eternity.”

Throughout the episode, Tony reflects on the loss of his mother by watching the 1931 gangster classic, The Public Enemy. James Cagney’s portrayal of the main character makes him laugh, but it’s ultimately the character’s mother that resonates with Tony the most. The love and care she shows near film’s end causes Tony to end the episode in tears, the only time he cries during the entire hour.

He’s unsure how to feel over Livia’s death. She tried to have him killed back in season one, but confesses to Dr. Melfi that he feels like a bad son. Relief, then? Throughout the episode, he repeatedly replies to condolences with a rhetorical, matter-of-fact, “Well, what are you gonna do?”

Then again, his outpouring of emotion at the end of the episode appears completely genuine.

On top of everything, Tony has plenty of other stressors to worry about — daughter Meadow is dating an African-American Jew named Noah Tannenbaum, top earner Ralphie Cifaretto is causing trouble along the sanitation routes, and, worst of all, sister Janice is back in town to stir the pot more than ever.

“Proshai, Livushka” touches on all these “nothing happens” plot points in a rather choppy procession, but that only adds to the uneasy feel of the episode. There’s enough pressure on Tony’s mind to cause him to see ghosts. Literally.

During Livia’s after-funeral “remembrance,” there are several notable ambiguities. The first is the sudden glimpse of Big Pussy in an upstairs mirror. Tony opens a door, maybe sees something that isn’t there, ponders it for a second and then shrugs it off. Even for viewers, it’s hard to catch right away. We end up second-guessing ourselves, too.

The second ambiguity is the mysterious man who briefly observes the “ceremony” from the staircase. He appears over Tony’s shoulder, peers into the room and then slowly walks back up the stairs, out of focus. Both are unimportant in the larger sense, as far as plotting goes, but they are supernatural enigmas that add to the show’s overarching philosophical mysteries.

The script’s unevenness is masked by the fact that the episode displays a consistently somber tone. Various plot threads are laid down, but they all move at a slow and steady pace.

This is an installment that completely relies on mood, after all. Livia’s death — and all its introspective repercussions — makes this one of The Sopranos’ most underrated and rewarding chapters, while also providing a perfect counterpoint to the lighthearted season premiere.

If you view these first two episodes of season three as a singular introduction, then now the season proper can officially begin. But that doesn’t necessarily mean the ghosts will go away.

Last but not least, let us all take a moment to remember the great Nancy Marchand, and her cornerstone performance as the great Livia Soprano. The character’s cynical specter will loom large over the rest of the series.