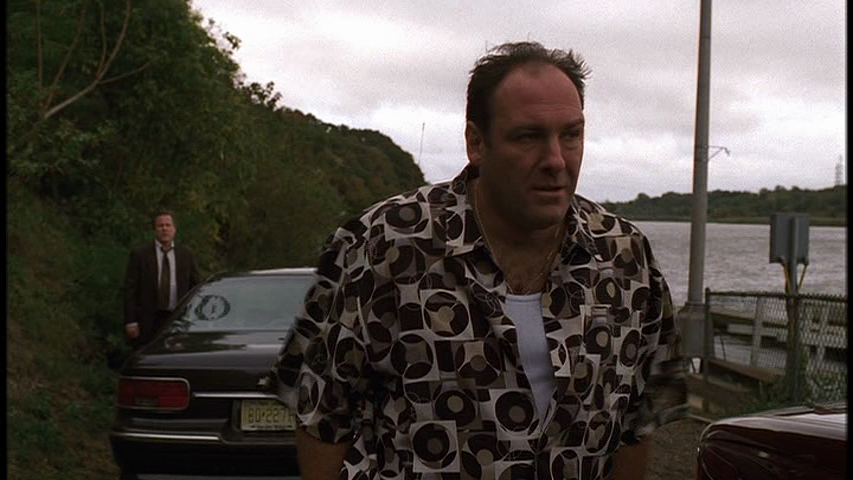 The main plot of The Sopranos isn’t always entirely clear. The important storylines that we should be focusing on are often hidden and pushed off to the side. This usually makes for episodes that work great as meditational mood-setters, but sometimes we’re left looking for a more traditional sense of direction.

It isn’t until season’s end that all the dangling plot threads are picked up and pieced together, making for a propulsive home stretch that doesn’t relent. And in terms of ranking “Most Exciting Home Stretch to Finish a Sopranos Season,” season one can probably lay claim to the top spot.

For example, even though seasons five and six finish with a far more epic and ambitious sweep, the final three episodes of season one maintain a sprinter’s pace that had never been seen before in television history. Once we begin “Nobody Knows Anything,” we’re off to the races, and the pace won’t let up until the season finale.

After the standalone events of the previous three episodes, “Nobody Knows Anything” gets us back into the thick of the main mob action. The opening scenes buzz with a Tarantino-like energy: Big Pussy throws his back out at a whorehouse, while crooked cop Vin Makazian frequents said whorehouse. A quite random “4 Days Later” title card leads to a crackling scene in which Pussy and fellow capo Jimmy Altieri are busted by the feds for trafficking drugs and guns. Pussy tries to make a run for it, but doesn’t get too far.

Not five minutes into the episode and it’s already brimming with intensity. Without any detours into gangsta rap or high school soccer, “Nobody Knows Anything” is strict mob action through and through.

The main thrust of the episode comes from the possibility that Big Pussy is wearing a wire. This crucial information reaches Tony via Vin Makazian, who presents some convincing evidence: Pussy was just charged with trafficking heroin, yet he’s back on the street within days. Furthermore, Pussy’s back pain might be caused by psychological, not physical, stress. However, Tony needs to be sure — this is his best friend we’re talking about. He loves Big Pussy like a brother, and hates Vin Makazian like his mother. Who should he believe?

Tony asks Paulie to follow Big Pussy around, to check if he is indeed wearing a wire, and to murder him if it can be confirmed. When Paulie takes him to a steam bath, he refuses to take off his clothes.

Sal “Big Pussy” Bonpensiero has been a minor player so far. He’s carved out a distinct personality, yet he’s not as distinguished as, say, Paulie or Silvio. From what we have seen of him, though, he’s been a very friendly and funny guy, someone whom Tony loves and respects. Other than Vin Makazian’s word, nothing in this episode truly proves that Big Pussy is a rat. Yet, once the idea is floated, it’s hard to look at him the same way. His excuses seem plausible, but considering the newfound facts, they’re hard to buy.

In fact, it seems Pussy knows that Tony and the others know, else why would he be acting so elusive? Still, Tony refuses to believe it. He even goes to Dr. Melfi for advice, asking her if his friend’s back problems could be caused by severe stress, which she admits is a possible scenario. It’s not the first time Tony has gone to Dr. Melfi for managerial advice, and it certainly won’t be the last.

Yet, in the end, nobody knows anything, and no truth is certain — by the end of the episode, Big Pussy has disappeared.

Silvio later tells Tony that Vin Makazian owes Pussy $30,000 in football gambling debts. It’s all Tony needs to discredit Vin’s word. On top of all this, Jimmy Altieri is released from custody, and stops by Tony’s home one evening, asking all sorts of potentially incriminating questions. Tony then concludes that Vin must have gotten Pussy and Jimmy mixed up, as they’re “both fat fucks with black hair.”

As for Vin, we’ve seen throughout the season that he is a troubled soul. Ever since he beat up Melfi’s date in “Meadowlands,” we could tell that something was a little off with the guy. Tony’s relied on Vin intermittently throughout the season, but has shown little to no respect for his man on the take. He berates him as a “degenerate fucking gambler with a badge” on more than one occasion.

Later in the episode, Vin gets caught at the brothel as it’s raided by the feds. He loses his badge. Only he doesn’t lose it entirely — he flashes it one last time to move past a traffic jam, only so he can get to a spot on the Donald Goodkind Bridge, and jump off. He just couldn’t wait any longer.

It’s a tragic end for Vin Makazian, and the sight of him falling to the water below encapsulates Tony’s poisonous influence. While Tony wasn’t entirely responsible for Vin’s suicide, the way he treated him certainly didn’t help. Symbolically speaking, it’s similar to the planes exploding over Walter White’s house at the end of Breaking Bad season two.

The best scene of the hour is Tony’s tense encounter with Paulie and Silvio near episode’s end as they scramble with what to do — which one of their capos must they kill? Pussy has vanished, Makazian is dead and nobody knows anything. For now, they all agree that Jimmy is the rat.

Elsewhere, Livia’s manipulative powers are out in full force, and Uncle Junior is fully ensnared in her nihilistic clutches. She passes onto him the fact that Tony has been meeting with the other capos at Green Grove behind Junior’s back, subtly giving Junior the idea that he should put a hit out on his own nephew.

This new development sets us up for a brilliant finish, yet the Big Pussy storyline — which will be shelved until season two — is what fuels “Nobody Knows Anything.” The fraught paranoia and the lack of conclusive evidence makes for a tightly-written episode that completely gets us back in the swing of things after the misstep of “A Hit is a Hit.”

The Sopranos S1E11: “Nobody Knows Anything”

One thought on “The Sopranos S1E11: “Nobody Knows Anything””