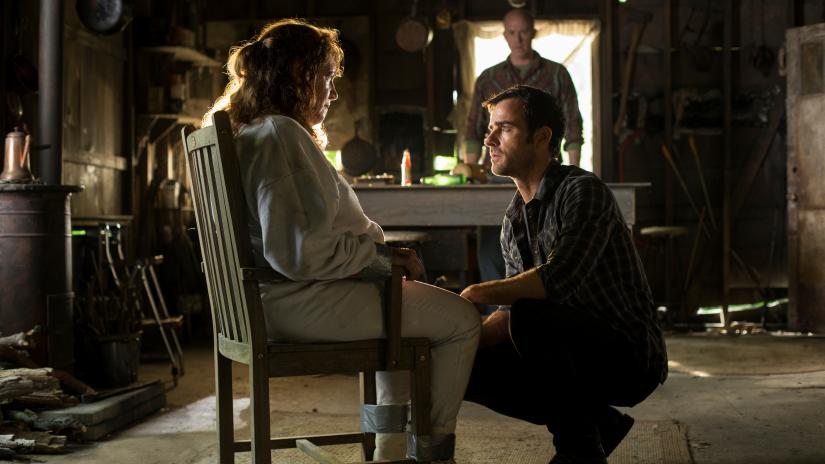 It’s hard to “let the mystery be”

Lost, Damon Lindelof’s previous show, was either a massive success or a beautiful failure, depending on how you look at it.  It was a show that asked many questions and encouraged fan theories—the classic Mystery Box show.

The Leftovers asks just as many questions but doesn’t encourage fan theories—let the mystery be.  The Sudden Departure isn’t meant to be figured out; it simply happened and that’s that.

This balance of “what happened?” and “doesn’t matter” is absolutely perfected in seasons two and three, but The Leftovers’ debut year has had occasional trouble with this unique balancing act.  The best episodes so far have been dramatic character pieces, the sibling standalones “Two Boats and a Helicopter” and “Guest.”  The remainder of the episodes have largely been middle of the road.

Yet the mystery of the Sudden Departure is still what drives interest in the show.  The subtle hints and possible clues are what have kept semi-slogs like “BJ and the AC” and “Penguin One, Us Zero” afloat.  What do the wild dogs mean? Do Holy Wayne’s hugs actually have magical power? What’s the deal with the May 1972 issue of National Geographic? These are only a few of the many burning questions.  Questions which don’t necessarily have answers—this isn’t a Westworld or Game of Thrones, after all—which forces us to ask the most important question of all: what’s the point?

In “Cairo” some questions are finally answered but a plethora more are raised.  For example: The Leftovers now adds “Was it all a dream?” to its already credible possibilities of religion, magic and rationality.

Kevin wakes up in his truck, parked in the middle of the woods in Cairo, New York.  With him is Dean the Dog Killer, who may or not be a figment of the sheriff’s imagination, claiming that Kevin kidnapped Patty the previous night and tied her up in a nearby shack.

I give credit to The Leftovers for giving us an anti-hero—one who is as handsome as Donald Draper, no less—who is legitimately going crazy.  It takes real balls.  He finds his missing white collared-shirts set up in a ritualistic circle amongst the trees.

He also finds Patty tied to a chair, bloodied and beaten.  It would seem that Kevin becomes some sort of anti-Guilty Remnant fascist during his midnight runs with Dean, and now he has found himself in quite a pickle.  He spends the episode struggling with his beleaguered conscience and a talking Patty, who proves an excellent philosophical foil (shouts to actress Ann Dowd).

The rest of the episode suffers because—let’s be honest here—all we really want to see is what the hell is going on with Kevin.  I don’t care if Jill and Aimee aren’t friends anymore, or if Laurie and Meg aren’t getting along without Patty’s leadership.  Even Nora Durst is going through the motions.

It’s hard to watch anything related to the Guilty Remnant and not feel frustration, especially after this episode.  Gladys’ brutal stoning is the only thing that gave me any sympathy for their plight (even if it is the series’ worst episode), but Patty reveals that the whole thing was a put-on by the GR themselves.

Self-hate crimes as their latest offense, it seems that these chain-smoking weirdos are nothing more than nihilists for nihilism’s sake.  Must be exhausting.

Jill’s appearance at the GR’s doorstep at episode’s end, along with Laurie’s stunned reaction, doesn’t hit me the way it’s meant to hit.  I took it as a yawning signpost meaning that we’ll only be spending more time with the chain-smoking weirdos—and now they’ve added a well-seasoned nihilist to their ranks.  Good God.

The Kevin reveal is worthwhile, but it’s not mind-blowing.  Certainly not mind-blowing enough to mask the flaws in the rest of the episode.  Kevin ultimately decides to confess everything and release Patty, but not before she can kill herself with a shard of glass—another wacko move from The Leftovers’ resident nutjobs.

Luckily, The Leftovers finally comes into its own with the first season’s final two episodes.  By my count, then, “Cairo” is the last “bad” episode in The Leftovers’ run.

If you’ve made it to this point and still haven’t bought the hype, I’ll say this: what follows is a sustained stretch of brilliance that is right up there with the best TV has ever offered.

-It seems that Dean is indeed real.  Patty personally addresses him, as well have several characters throughout the season.  It doesn’t look like we are going to have a Mr. Robot—or Fight Club—situation here.

-Dean tells Kevin that the wild dog chained up outside the Garvey house was a bet by Kevin that he could rehabilitate it.  Jill sets it free this episode.

-I guess we’ll never know what Kevin said to Aimee while sleepwalking that one night, or if the two of them ever fucked.  Probably not, to answer the latter.

-“Cairo” is directed by the talented Michelle MacLaren, who made her bones by helming several Breaking Bad all-timers.