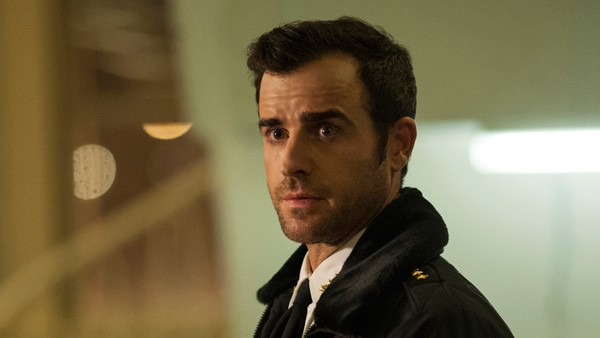 “The dream is my reality…“

Hmm…The Leftovers meets the “nothing happens” episode.  The Leftovers is certainly not Mad Men.  Is this going to be any good?  On a show with so many unanswered questions, we don’t have time to be waiting around for nothing.

Continuing a trend, the key to this show in the early going is to be patient.  “B.J. and the A.C” isn’t all that bad—at least not as bad as the episode title.  There are some interesting character moments to be found within the surrounding skullduggery.

If nothing else, The Leftovers is a very good looking show.  You’ve got to give it that.  The directing is solid and consistent, while the bleak and icy aesthetic eventually grows on you.  Perhaps this is the episode where the show’s mise-en-scène finally comes together—the minimalism is enhanced by the wintertime setting.

Let me be honest, though: “B.J. and the A.C.” is probably the worst episode in The Leftovers’ entire run.  If you aren’t sold on this show just yet, then it can only go up from here, right? However, if “Two Boats and a Helicopter” didn’t do it for you, then I’m not sure this is the show for you.  But it would be worth it to at least see the magnificence of season two.  Just make it past this one.

“BJ and the AC” tells a couple of self-contained stories about faith: losing it, keeping it, increasing it.  Kevin and Tom—on opposite sides of the country—are losing their respective faiths in their respective idols.

For Kevin, that is family.  He has been tasked with finding the missing Baby Jesus from the town’s nativity scene, a menial task for a police chief worried about the Guilty Remnant’s next move.  He already knows the thief: rebellious daughter Jill.

To only add to his woes, estranged wife Laurie shows up at his house and, with the aid of Meg, asks Kevin to agree to a divorce.  It’s a tense scene, full of f-bombs and uncomfortable close-ups, and it’s probably the finest moment of the episode, from a storytelling standpoint.

Yet the entire Kevin storyline can be summed up by his own actions at the end of the episode: toss it out the window, like the baby Jesus.

On the other hand, stepson Tom Garvey’s storyline is the best of the hour—a first! Throughout the episode, his faith in Wayne dwindles.  He’s been waiting on that call from “Holy” Wayne for six weeks.  He’s in fucking Amarillo, Texas.

Tom’s isolated storyline has contained plenty of action so far—shootouts and magical hugs—but it hasn’t been fulfilling.  That changes in “BJ and the AC,” with several fights and chase-scenes that are the Jason Bourne to Mapleton, NY’s Hereafter.  And I’m not even a Matt Damon fan.

Perhaps Tom is starting to gain sympathy from his loss of direction.  Why was he even following Wayne in the first place? I think it’s because, at his core, he’s just a bro who wanted to score some easy pussy.

Now he is finding himself in increasingly dangerous predicaments—diner fights with naked men and narrow escapes from hospitals.  This isn’t what he signed up for.  By episode’s end, it seems he has thrown away his faith in Wayne and instead re-committed himself to protecting the delirious Christine.  Way to man up, Tommy, but she’s a bit of a head-case, no?

Another point in Tom’s favor: he shows pure disdain for the Guilty Remnant.  Most relatable moment of the episode.

There are parts that work with “BJ and the AC,” and there are several broken pieces to go with it.  The depressive cycle in Mapleton continues, with the ending aiming for prestige and sorely missing the mark.  For a show that relies so much on mysterious ambiguity, the symbolism and metaphor are surprisingly heavy-handed.

Tom’s exciting storyline is actually a saving grace.  But the real hero of an episode like “BJ and the AC,” at least for me, is retrospect.  I’m aware of what The Leftovers will become—one of the best shows in TV history—and so I look on early missteps like this with a fond eye.  There is still plenty to savor and contemplate in this episode, little moments that don’t immediately grab you but stay with you long after the end credits roll.

Jill’s depressing high school misadventures are the worst aspect of the entire series, and they get an extended spotlight this week.  I understand that the Sudden Departure generation would be an extremely despondent and nihilistic bunch, but these assholes are more like modern-day droogs.  Isn’t there anything better to do than have sex parties and commit blasphemes, in the old-fashioned sense of the word no less?  The long-haired kid in the fitted hat basically reserves himself a spot in Hell with his actions this episode—and Jill comes close.  That is, if it even exists, eh? One who believes in a hell would never teabag the baby Jesus.

Furthermore, Jill stealing the baby Jesus is pointless to begin with, like many of her actions.  The depressed teen shtick is nothing new, heavens no.

The pre-credits sequence is another moment aiming for prestige, but ultimately falling short.  Take it or leave it.  The creation process of the baby Jesus—from mass manufacturing to shipping, purchasing to stealing.  By episode’s end it is returned, only to be tossed on the side of the road.

Several moments of intriguing ambiguity, most of them involving Tom.  The naked man who confronts Christine in the diner claims he’s been seeing her in his dreams.  Tom ushers Christine out after a brief scuffle, the naked man repeats “I know what’s inside you.”

Yet Tom is learning not to take stock in Christine’s, or Holy Wayne’s, dreams (or delusions).  A truck crashes on the highway at episode’s end, spilling its contents (life-size “bodies” manufactured and personalized for grieving families affected by the Departure) all over the road.  Christine runs out, exclaiming it’s just like her dream, while Tom gives a concerning look.

Kevin’s car dies right when he blasphemes: “baby fucking Jesus.”  Love how The Leftovers lends credence to theories of religion, magic and rationality.

But, for real, though – what could that episode title even mean? “BJ” is “Baby Jesus,” but I’ve no clue what the “AC” stands for.  Don’t give a shit, neither.