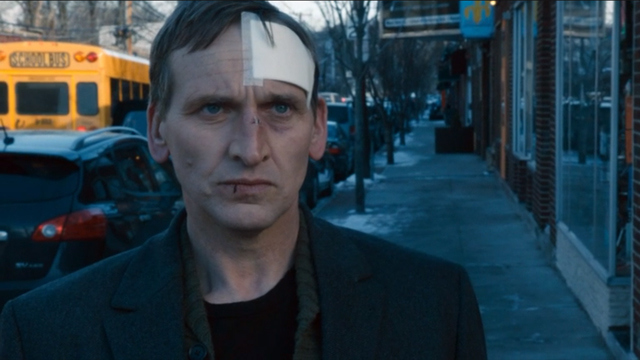 “Two Boats and a Helicopter”

One of my knocks against episodes like “Penguin One, Us Zero” is the fact that they are totally bereft of humor.  Same goes for the “Pilot.”  Thankfully, an episode like “Two Boats and a Helicopter” swoops in and lifts the show to new heights.

The Leftovers may be playing it straight so far, but this is a pretty experimental show, even for HBO standards.  The high-reaching metaphysical themes, the supernatural turns and the unique structure—all make The Leftovers a challenging, yet rewarding series.

“Two Boats and a Helicopter” (another bad title) comes out of left-field and focuses solely on Rev. Matt Jamison, devoting an entire episode to his POV, even though he’s been nothing more than a background character up to this point.

And you know what? I came out of the episode with Matt Jamison as my new favorite character.  So far, he’s just been the rambling, angry guy on the street corner, handing out flyers professing that not all those who Departed were “heroes.”  Some of them, as Matt has researched, were convicted felons, child molesters and adulterers.

Like I said, The Leftovers has been sorely lacking in the jokes department.  Not even a trace of black comedy, either.  Luckily (or unluckily, I guess), the events that transpire to Matt Jamison are one cosmic joke after another, as it should be on a show with such a cataclysmic event at its center.

The cold open features a moving sermon by the good reverend, only to pan out and reveal that he’s delivering it to a congregation of five.  Then, an angry biker-type fella comes in and punches Matt square in the face.  He shoves a flyer—one that pronounced his Departed wife as a “pill-pusher”—into Matt’s mouth and leaves.  It’s a bad start for the reverend, but it’s already a huge step-up in quality for The Leftovers.

Kevin Garvey makes one short appearance, checking up on Matt in the hospital, but for the entirety of “Two Boats and a Helicopter,” this is the Matt Jamison hour.  It’s an exhilarating ride, and it provides a unique focus on religion, faith and luck in times of crisis.  Matt’s dilemmas are a modern-day Book of Job, and he is tested time and time again on this bleakest of dramas.

Matt must come up with $150,000 in cash by 5 o’clock tomorrow or else he will lose his beloved church.  “Why do bad things happen to good people?” is the central question here, and every God-fearing Christian—or any person of religious faith, for that matter—ought to feel some form of relatable sympathy for poor Matt here.

First, he goes to Nora Durst, his sister, and their heartbreaking scene hits all the right notes that the show couldn’t find in its first two episodes.  Both siblings have been through so much pain—Nora losing her husband and kids to the Departure, Matt losing his wife to a coma because of a car crash during the Departure, both Matt and Nora losing their parents to a fire when they were kids.

Matt, faith undeterred, believes it has all been a test, Sudden Departure included.  It must be acknowledged that if such an event ever happened, most of the world would turn cynical.  People like Matt would be few and far between.

Yet the cruelest joke of all is played right at the end, and I won’t even reveal it here because it is such a kick in the dick.  Why do bad things happen to good people? Shit, I don’t know.

The Leftovers will come to embrace this unique POV structure, especially in seasons two and three.  Every Matt Jamison episode is a classic, all of them following the same themes of religion and faith.

“Two Boats and a Helicopter” shows that The Leftovers already has a firm handle on the type of show it wants to be.  In the age of Peak TV, it seems like the standalone episode has gone by the wayside.  The Leftovers expertly brings it back—an episode that has very little connection to what came before, but is all the better for the change of scenery.

-Bad things happen to good people all the time.  Same is true of the reverse.  Case in point: a punk outside the casino tries to steal all of Matt’s winnings.  Matt goes berserk and repeatedly smashes his head into the ground.  Driving home that morning, Matt stops to help a Guilty Remnant member who has just been struck with a rock.  Matt calls the cops, only for the attackers to come back and do the same to Matt.  It is because of this that he misses his deadline for the bank.  When Matt gave in to sin, he came away with the money.  When he let his good-nature stop him, he lost everything.

-The signs from God that draw Matt to the roulette table are pigeons and blinking red lights that he had been seeing earlier.  The Leftovers is full of nuance because it explores issues of faith but never gives any concrete answers.  Was it God’s will or just dumb luck?

-Case in point to above bullet: Matt’s church prays for a dying girl early in the episode.  Later, Matt discovers that she was cured.  “My congregation, this morning, we prayed for her,” Matt exclaims.  “Well, she woke up last night,” replies the orderly.

-Matt finds Laurie keeping a silent vigil outside of her old house.  Another great moment that adds color to the characters.

-Matt’s dream sequence is another highlight in an episode full of them.  Adds background to his character, ties in nicely with the series’ opening Sudden Departure scene and has a great touch of surrealism.

-The fact that the Guilty Remnant are the ones who bought the church makes for the cruelest twist of fate in the entire episode.

-“I’d say stop me if you’ve heard this one before, but you have, and I don’t really want to be stopped.”

The Leftover S1E3: “Two Boats and a Helicopter”