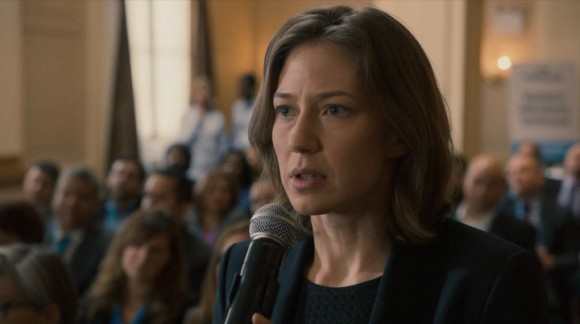 “Guest” is a much-needed breath of fresh air.  Just like “Two Boats and a Helicopter,” it is another single-POV standalone, this time with the spotlight on Nora Durst.

So far, we know Nora to be a broken, lonely woman, but on the fringes of the main storyline.  She lost everyone—her husband and two kids—on the Departure and now spends her depressed days shopping for groceries as if her family were still alive, stalking the preschool teacher her husband was sleeping with and paying hookers to shoot her.  Her equally depressing job, working for the U.S. Department of Sudden Departures, entails her to ask “legacies” (those who lost someone to the Departure) a series of personal questions in the hopes of finding some sort of pattern.

The 8-minute prelude before the credits is the entire Nora Durst experience—turning her from ancillary background character to lead triple-threat.  Top dog, in other words.  The cold open gives us a series of intriguing events that aren’t quick solves.  Why does Nora receive a 100 percent affirmative rate when she asks Question 121? Does she pay hookers to shoot her in the chest (protected by bullet-proof vest) because she wants to feel alive, or because she wants to feel close to death, to relate to her Departed family?

So many questions, so few answers, but pondering is half the fun.  This is an extremely elegant episode by first season Leftovers standards, provoking thought and providing ambiguity in all the right places.  There is no overt symbolism or cheap gimmicks—every note rings true.

The clear three-act structure works wonders.  A standalone done right.  Nora begins the episode going through the motions.  She doesn’t really show it, but she’s full of tremendous grief, having suffered more than any of the Garveys could know.  Filing for divorce from her adulterous husband is a step in the right direction, however.  “Guest” is Nora’s odyssey about moving on and coming to terms with tragedy.

When Nora goes on her trip to Manhattan for her panel at the Sudden Departure convention, she finds that someone else has taken her name tag and is going around the convention pretending to be her.  The real Nora, outraged, is forced to wear the titular guest pass, shedding her identity in the process.

She finds her way to a party full of good-looking and upscale cynics.  It’s a tremendous scene, the penthouse party vibe perfectly laid down.  Nora starts to embrace her role as Guest, further moving away from past grief.

Nora spends the night rejecting her identity, while Carrie Coon spends the episode discovering hers—as one of the most gifted actresses of the current Peak TV era.  She will only get better as the show progresses, but her performance here already places her in the female upper echelon.

The next morning, hotel security kicks her out—the fake Nora having smashed the barroom mirror the previous night.  Nora pleads her case, shows resolve and convinces the hotel director to walk down to the panel with her to see if there is indeed an impostor.  Which there is, of course.

This sequence, however, is a step back for Nora.  She finds she can’t let go of her past, rejecting the previous night’s role as Guest, a figurative chance at a fresh start.

The impostor is revealed to be an anti-government activist, causing an uproar as she is escorted out.  But this only causes our Nora to become more despondent than ever, sliding out unnoticed during all the commotion.  With Nora at her lowest, The Leftovers brings up another unanswerable question: what’s the point of it all?

Or, as Nora puts it: “What’s next? What’s fucking next? Nothing is next! Nothing!”

The final act saves the best for last, as it should be in a standalone— “Guest’s” emotional core.  Nora, in the post-apocalyptic Children of Men-like city streets, meets a mysterious character, played by the great Tom Noonan, who asks her: “Do you want to feel this way?”

He leads her to Holy Wayne, stationed in a dingy NYC apartment, in what is probably the most satisfying moment of the entire series up to this point.  In a highly emotional scene, Wayne uses his “magical” hug to take away Nora’s pain, who breaks down in tears.

My definition of the Magic Center—a scene in which the sublime is reached; almost a “time stands still” type of moment—is mostly a characteristic of a great film.  Nora’s encounter with Wayne is the Magic Center of “Guest,” an epiphany which elevates an already great episode to an even higher standard.

By the end, we see a changed Nora.  She’s no longer buying groceries to keep her pre-Departure routine intact.  She’s no longer staking out the young preschool teacher.  She even agrees to go on a date with Kevin.  And, as far as I know, she’s not paying prostitutes to shoot her anymore.

She even gets her first “no” response to Question 121, which we find out is “In your opinion, do you think the Departed is in a better place?”

Typical of The Leftovers—but genius at the same time—this reveal only brings on more ambiguity.  Why did Nora have such big hang-ups on this question? What does this mean for her going forward? Did Wayne really take her pain away?

Whatever the answers may be, Nora Durst—and The Leftovers—are here to stay.  For all its previous lows, “Guest” finds The Leftovers reaching highs that few other shows on TV are capable of.

-Wayne’s overall purpose is still unclear, but him finally connecting with someone else’s storyline was a highly satisfying moment.  He tells Nora that he has foreseen his fast-approaching death.  Perhaps Wayne’s not full of shit after all.

-Nora tells Kevin what everyone has been thinking: “Fuck your daughter.”