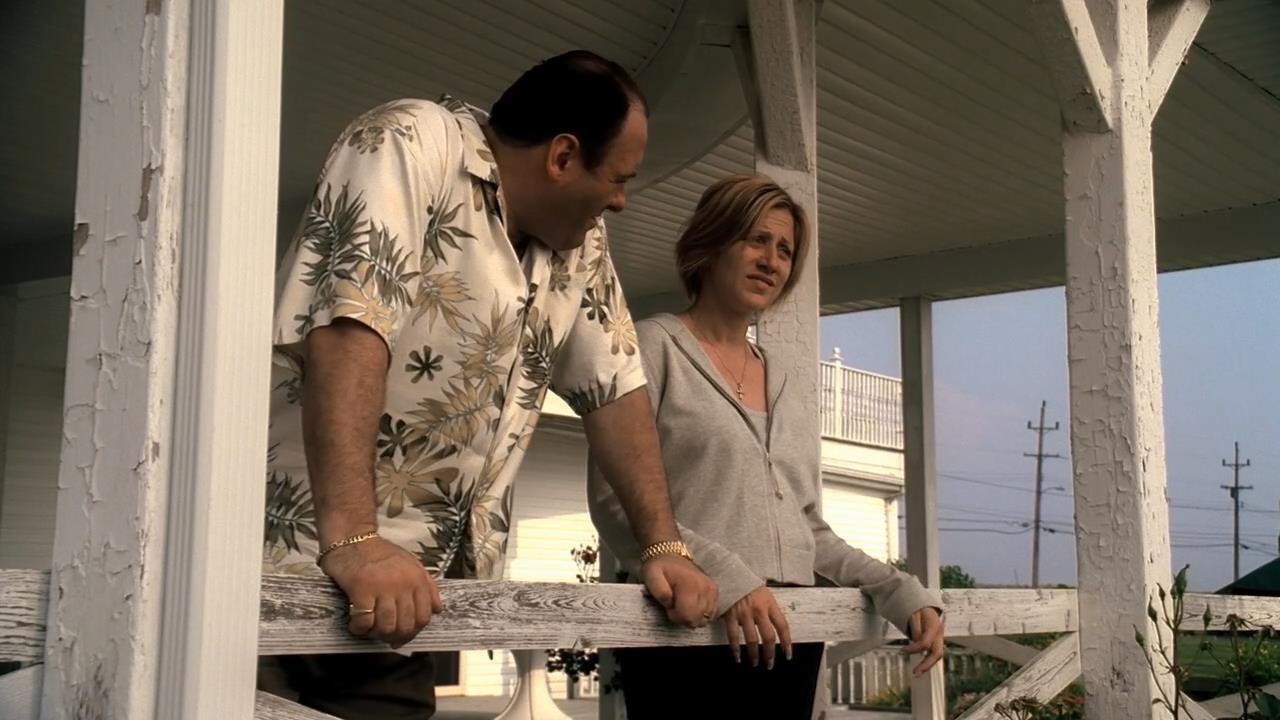 Whitecaps: “The King and I”

If season four of The Sopranos has at times felt aimless, adrift or anticlimactic, then series creator David Chase has accomplished exactly what he set out to do. In a concerted effort to drain all pretense from the storyline, the previous 12 episodes have been intentionally minimal, emotionless and even plotless. That’s why “Whitecaps” serves as a perfect finale: it surprises us with its complexity and raw emotion.

The entirety of season four has been subtly leading to one climactic moment, yet the exact destination has felt unclear. But now that we’ve arrived at the end, it’s easy to see how we got here. For example, Ralph Cifaretto’s murder — the single most shocking event of the year — was a misdirect conveniently handled early on to distract us from the actual narrative, which has always been Tony and Carmela’s crumbling marriage.

Similar to the structure of the season as a whole, “Whitecaps” begins with a quiet calm before the storm — everything starts out perfectly before taking an abrupt turn for the worst.

At the beginning of the episode, Tony impulsively buys a beach house to bring his family closer together. Surprisingly, the initial returns on the investment are exactly what he hoped. Even Carmela warms to the idea when she realizes the property will pay off for generations to come. They lovingly embrace on the beach.

With Christopher Moltisanti out of rehab, Carmine Lupertazzi about to be assassinated and a renewed passion for Carmela and the kids, it seems that everything in Tony’s life is trending upwards. Yet all it takes is one drunken phone call from Irina for everything to come crashing down. The idyllic illusion is shattered just 20 minutes into the episode.

As we already know, Carmela has put up with Tony’s infidelities throughout their entire marriage. But throughout season four, she has grown increasingly disillusioned with her lifestyle. An amalgamation of arguments about finances, Tony’s daily egotism and, of course, a lovelorn attraction to Furio Giunta has developed into a volatile powder keg waiting to burst at any second.

Irina’s confession to Carmela about Tony’s affairs — particularly his tryst with her cousin, Svetlana — is the spark that causes their relationship to explode.

In “Whitecaps,” Carmela finally receives the catharsis she’s been waiting for. However, her liberation is far from easy. The rest of the episode becomes one huge, drawn-out argument that rises in tension and emotion — a moment that has been brewing for the entire series. Their separation is so realistic that we feel intrusive just for watching.

Throughout their fight, Tony and Carmela make several references and callbacks to past events, imbuing each line of dialogue with a multi-dimensional element of shared history. The argument turns into a violent war that is no different than the murderous mob conflicts we’ve become so accustomed to.

For the first time all season, the action moves at a whirlwind pace, even though this slow-motion tragedy has been unfolding for as long as the characters have existed. Luckily, from a viewer’s perspective, the wait was worth it. Actress Edie Falco steals the show and delivers one of the greatest performances in television history, matching James Gandolfini punch for punch.

Then again, all punches thrown in “Whitecaps” are purely metaphorical. It’s rare for a Sopranos season finale to feature so little violence, but that’s exactly why the episode — and season four as a whole — has been such a wonderfully strange outlier. The future of The Sopranos is drastically altered moving forward without any death or bloodshed.

At the end of the episode, Tony packs up his suitcase, says goodbye to Carmela and the kids and walks out the door. It’s the first selfless thing he’s done in God knows how long, signifying that maybe he can change after all. But if Chase has taught us anything, it’s that people (and TV shows) are forever resigned to their circular arcs.

The sad reality is that Carmela will never be free from Tony’s toxic influence. Her dire situation is humorously mirrored with Alan Sapinsly, the prideful owner of the Whitecaps beach house who won’t let Tony out of the sale. Fittingly, the episode ends with an image of the Stugots anchored offshore the Sapinsly home, blaring Dean Martin throughout all hours of the night, eventually forcing the stubborn lawyer to relent. Even when Tony isn’t there, he still finds a way to get what he wants.

As always, the more things change, the more they stay the same. Although “Whitecaps” leaves us with an uncertain future, the trajectory of the series as a whole has never been in doubt. It’s a fantastic season finale that closes the door on one chapter and ultimately brings us closer to the inevitable end.