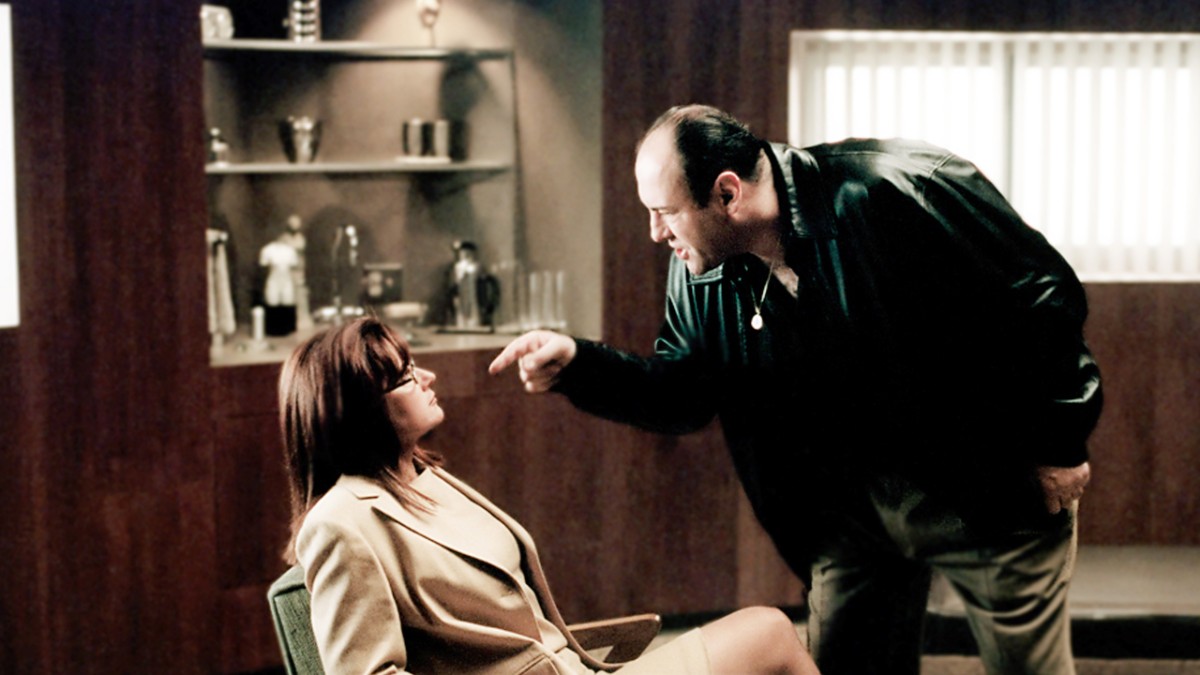 Everybody Hurts: “Automatic for the People”

Every time Tony tries to turn a corner, he goes about it the wrong way. For example, after he survives a coma in season six and vows to live life to the fullest, he confesses: “Every day is a gift. It’s just … does it have to be a pair of socks?”

When Tony learns that his former flame, Gloria Trillo, recently committed suicide, he feels immense guilt. However, his attempts to prove that he isn’t a toxic person — lending money to Artie Bucco, giving his cousin an expensive suit, taking Janice out to dinner — are all self-contradictory and selfish at heart.

It’s what series creator David Chase has been trying to say since the very beginning: people never change.

“Everybody Hurts” continues season four’s slow-burn approach, yet the episode itself has the look and feel of The Sopranos season three. For one, we receive closure on a character that we never expected to revisit. Meanwhile, the shadowy mise-en-scène hearkens back to the dark color palette utilized throughout the previous year.

In fact, the entire episode feels indebted to the series’ past. Although the overall subject matter is despairing, the dialogue is injected with some much-needed humor. For instance, a sub-plot about Artie Bucco getting scammed on a loan provides tremendous comedic value, even if it ends with him attempting suicide.

Tony’s situation with Artie mirrors the bust-out with Davey Scatino — sure, it’s in Tony’s nature to help out a high school friend, but it’s also in his nature as a mob boss and a businessman to prey on the weak. After Artie’s business venture inevitably fails, he chastises Tony for being able to see this result coming from a mile away.

“It’s like an instinct,” Artie sobs. “Like a hawk sees a little mouse moving around a cornfield, from a mile up.”

The episode also features a memorable dream sequence in which the specter of Gloria Trillo returns to haunt Tony one last time, teasing him with a long scarf wrapped tightly around her neck. Full of Freudian symbolism and ghostly imagery, it’s the first time since “Funhouse” that The Sopranos has luxuriated in outright surrealism.

Dreams have always played a crucial role in the series, yet one element that has been noticeably absent from season four has been Tony and Dr. Melfi’s therapy sessions. Gloria’s suicide finally gives them something meaningful to discuss, even if Tony angrily blames Melfi for what transpired. In the end, however, Tony only blames himself.

That’s why he spends the rest of the episode fishing for compliments. He needs validation that he isn’t a toxic person, and even though there’s been countless evidence to the contrary, Tony ends the hour in total denial of his actions.

“Everybody Hurts” brings us back to the classic Sopranos formula, and it couldn’t have come at a better time. The series had been straying from the standard ever since the season three finale, which is why this episode can partly be viewed as a return to form, despite the fact that it fits right in with season four’s leisurely approach.

If it wasn’t for the relatively weak subplot (AJ Soprano finds out that his girlfriend’s family is richer than his), “Everybody Hurts” would be an underrated classic.

The Sopranos S4E6: “Everybody Hurts”

One thought on “The Sopranos S4E6: “Everybody Hurts””