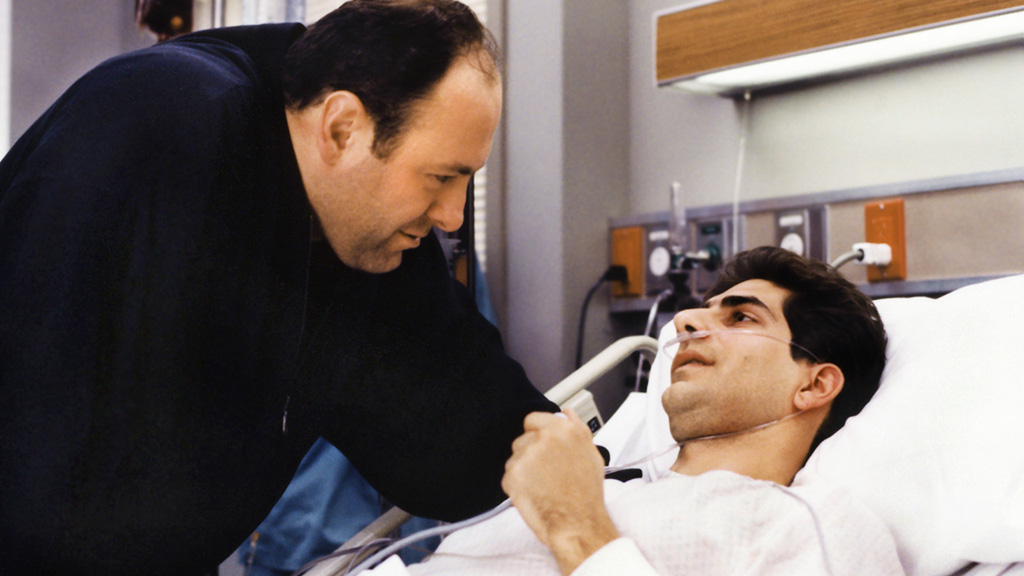 “Magical Realism and the Mafia”

There is definitely some spooky shit going on in “From Where to Eternity,” a ghostly episode of The Sopranos that focuses on death and the afterlife. Everything is handled with David Chase’s typical flair for shrugged-off cynicism, so don’t expect to actually be frightened, but there are a few ambiguous, supernatural happenings that resonate strongly throughout the hour.

The episode opens with Otis Redding’s “My Lover’s Prayer” (a soulful anthem that will be heard twice more), as a tearful Adriana sits beside a comatose Christopher. When we hear the song for a second time, the doctors are called into the I.C.U., and actress Drea de Matteo delivers a heartrending performance, helplessly watching as her boyfriend’s life hangs in the balance.

Tony, Carmela, Paulie and all the rest of the Family are constantly in and out of the hospital, the late-night phone calls and uneasy shoulder-pats-on-the-back relaying all the stress and worry that comes with such a situation.

If anything, though, deep down, these characters could ultimately shrug off such a tragedy. Of course, Adriana would be devastated, but people like Tony, Carmela, Big Pussy and Paulie would easily be able to move on.

Throughout the episode, they are concerned with only themselves — Tony with revenge, Carmela with unbridled jealousy, Big Pussy with redemption and Paulie with paranoid superstitions.

After hearing that another mobster’s comare accidentally got pregnant, Carmela orders Tony to get a vasectomy. Tony obviously prefers his testicles intact and vehemently opposes such an indictment. He lies about his current affairs to save his scrotum— “I broke it off months ago!”

Tony remains ignorant throughout the episode, continuously lying to Carmela and openly insulting AJ to his face. He does have a lot on his mind, after all. In the midst of a manhunt for Matt Bevilacqua, he doesn’t have time for marital squabbles or moral judgment from Dr. Melfi.

Meanwhile, Big Pussy — amid speculation that Tony knows he’s an informant — takes it upon himself to hunt down Matt. In the end, he and Tony commit the execution together. Stopping for food on the way back, they reminisce about their longtime friendship, even though they are rapidly drifting further and further apart.

Every action is done with Christopher’s health in mind, but every emotion is self-serving. Yet when push comes to shove — when Chris’ heart stops in the middle of the night and the doctors swarm his bed — Carmela is the only one who thinks of the bigger picture. She goes into an empty room and prays to God that Chris be spared so that he may find salvation.

Depending on where you stand, her prayers are answered. Chris wakes up the next day despite having been declared clinically dead on the operating table for over a minute. In a way, he did “see the light.”

Chris specifically requests to speak with Tony and Paulie, and imparts to them his vision: that he visited Hell in the form of an Irish bar, that he saw his father, and that he was told by the bouncer he’ll end up there too when his time comes, forever in eternity with the likes of Brendan Filone and Mikey Palmice.

One other piece of ambiguous info — a message from Mikey Palmice for Tony and Paulie: “3 o’clock.”

“3 o’clock” — whether you put faith in Chris’ visions or not — is ultimately a MacGuffin that sets Paulie off on a superstitious, existential crisis. He spends the episode worried about what the cryptic message could mean. Naturally, he goes to see a psychic.

Just like The Leftovers, The Sopranos provides no concrete answers to the questions it asks, instead preferring to let the mystery be. Chris’ “visions” of the afterlife can be shrugged off as morphine delusions and Carmela’s heartfelt prayer might be mere coincidence. This is how Tony chooses to look at it.

In a revealing therapy session with Dr. Melfi, an angry and conflicted (and scared) Tony confesses his belief that “soldiers,” like Chris and himself, don’t deserve a place in Hell. For them, murder is part of the job, a pact made between God and the Devil. He rationalizes the Mafia as a necessary evil to preserve Italian culture.

Melfi criticizes his logic: “What do poor Italian immigrants have to do with you?” Her realist perspective adds a pragmatic, unsentimental viewpoint to the intangible goings-on.

It isn’t until Paulie visits the psychic that elements of magical realism come into play. The psychic is able to speak with several vengeful spirits, and what initially appears to be typical hoax turns into curious anomaly when he starts revealing facts from Paulie’s past that only vengeful spirits would know. He recognizes Mikey Palmice, who chidingly asks if Paulie’s poison ivy still itches.

“From Where to Eternity” is a very meditative episode of The Sopranos. Issues of faith combine with mysticism and metaphysics, and the whole thing culminates in a euphoric expression of life — Tony and Carmela making love rather than fucking. All is forgiven.

Otis Redding closes out the episode with a third reprise of “My Lover’s Prayer,” this time used in its proper context. For the first time in the series, it seems that all the characters have made the right choice.

However, they’ll be back to their old selves by next episode. Series creator David Chase wants us to know that people never change, even in the aftermath of a near-death experience.

The Sopranos S2E9: “From Where to Eternity”