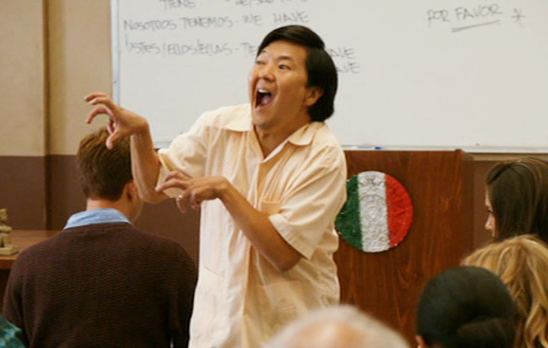 The Introduction of Señor Chang

The introduction of Señor Chang—Ken Jeong’s Asian-American Spanish professor—is by far the funniest scene of the episode.  His monologue (“In Spanish, my nickname is ‘El Tigre Chino’” *pretends to bite Shirley’s neck*) entirely representative of why Jeong stole every scene he was in during The Hangover.

But it’s the only—well, I shouldn’t say “only”—funny thing in this inconsequential episode.  Jeff Winger has to partner up with Pierce for a Spanish project.  The two have a falling out but eventually reconcile.  All is well.  They get an F (and F-minus) on the project.  Cheese.

Meanwhile, Britta gets on her anarchist high-horse when she chastises Annie and Shirley for protesting wrong.  It’s then that she realizes that she’s all talk and no action, all for supporting a cause but too lazy to support.  Check your privilege, Brittle (as Pierce called her).  This B story provides some good character moments.  I give it a B-plus.

The A-story gets a C, er, C-minus.  Jeff and Pierce—even though McHale and Chase are the biggest stars—shouldn’t be the first pairing you throw at the viewers.  They’ll have better misadventures down the road.

Abed and Troy, as you can see in their randomly amusing (or amusingly random) post-credits scene, are the combo with the best chemistry right now.  If you can rap together in Spanish, you’re bros for life.

But the Chang introduction, that is Community Hall of Fame right there.  It’s pure comedy, and I’m not talking about the Father John Misty variety.  It was all the glory of Leslie Chow revamped for the classroom setting and it had me laughing my balls off.

Laughing balls off at least once? Check.  This show’s got potential.