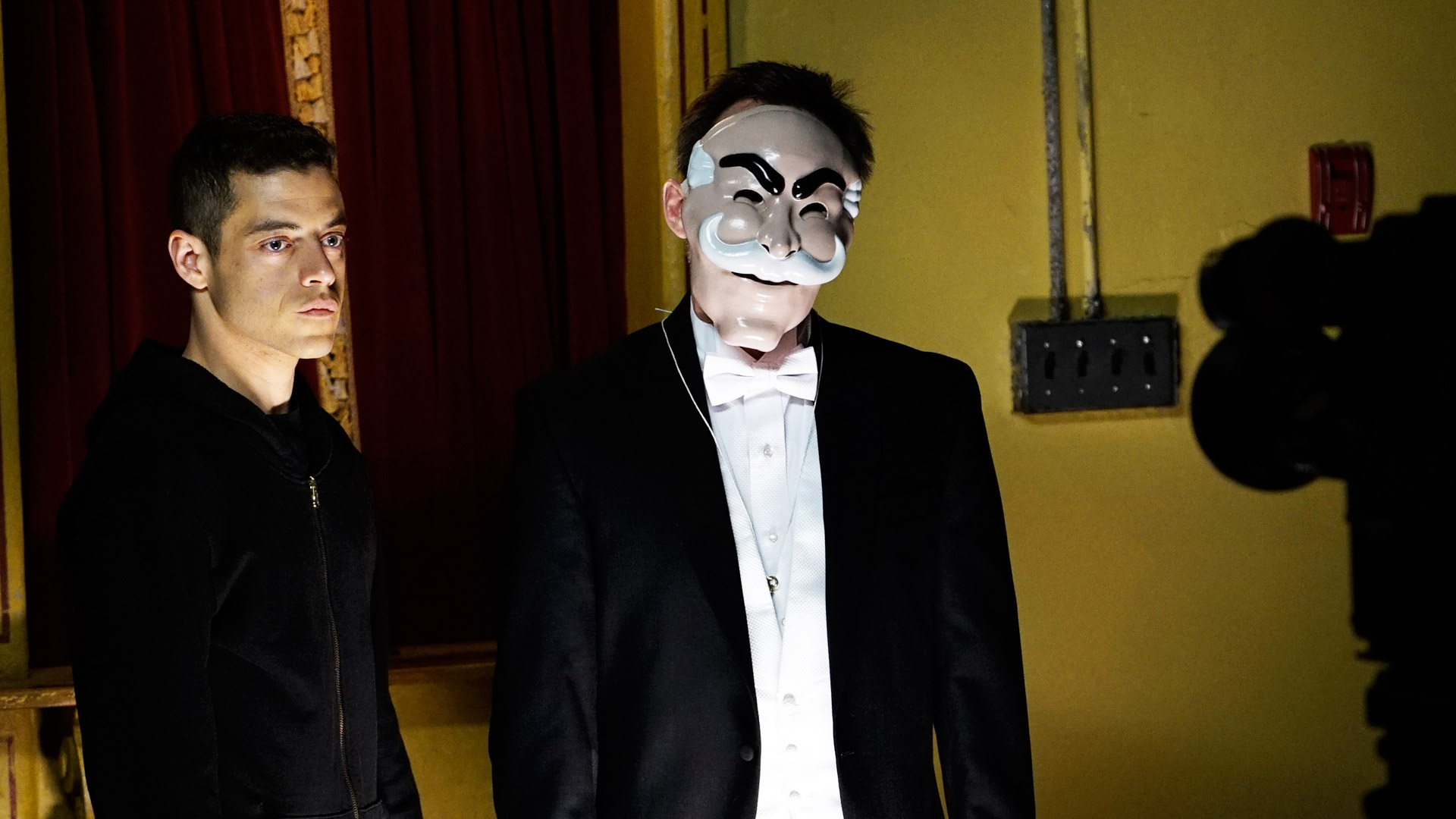 Elliot’s drug problem is the main focus this time out, his problem being that he is out of drugs.  That can only mean one thing—withdrawal hallucinations!

If you’re a fan of the surreal, like me, then you’re likely to enjoy this episode, it’s druggy quality and its extended dream sequences.  If not, then you might see “da3m0ns” as an exaggerated step in the wrong direction.

Elliot’s plan to hack Steel Mountain can only be enacted once he isn’t acting like a depressive junkie.  A depressive, fine, but a junkie, hell no.  Mr. Robot and two other members of the fsociety crew isolate Elliot in a cabin upstate so he can go through his painful withdrawals.

The whole episode operates with a psychedelic quality—jittery camera tricks and pulsating electronics.  Even the subplots involving Angela, Shayla, and Darlene utilize this aesthetic, and benefit greatly, the general haziness being an excuse for their overall messiness.

The subplots could even be looked at as aimless, especially in the shadow of the hallucinatory centerpiece.  Shayla and Darlene walk Elliot’s dog and have a brief flirtation while high on ecstasy, while Darlene and fellow fsociety female member Trenton do random shit and meet with Chinese hacker group The Dark Army.  It doesn’t amount to much—there are cool visuals and the Angela/Shayla subplot is the clear winner, but it’ll all probably be forgotten in the morning.

Elliot’s fifteen-minute hallucination finds Mr. Robot reaching deep into its avant-garde reservoir.  Occurring in the middle of the episode, it is the obvious make-or-break aspect of “da3m0ns,” possibly of the entire show thus far.

For me, it worked.  It’s definitely Lynchian, for sure, and there’s also shades of The Sopranos thrown in for good measure, but I believe Mr. Robot’s brand of surrealism is unique enough to transcend those influences.  It managed to be harrowing and hypnotic, flashy and fatal, and it had my eyes glued to the screen for the entire duration.

The dream sequence doesn’t feature anything we haven’t seen before—lengthy tracking shots, odd angles, glitchy cinematography, ambiguous iconography, faux-advertisements, speaking with fish, a final epiphany, etc.—but it is all accomplished with such a gusto of freewheeling confidence that the entire piece as a whole is much more than the sum of its parts.

It’s a bold move to place an episode like this so early in a show’s run, but, like I’ve been saying, Mr. Robot does not lack big balls.  In fact, it may have the biggest balls of them all.

I’ve watched “da3m0ns” twice now, it’s not a great episode, but it is a very good one.  In fact, if this is the direction that Mr. Robot wants to take further down the road, then maybe it is a good idea to have this kind of episode at an early junction.

This first attempt at surrealism passes the test with flying colors, so I can only hope Elliot’s next trip down the rabbit hole is just as good, if not better.