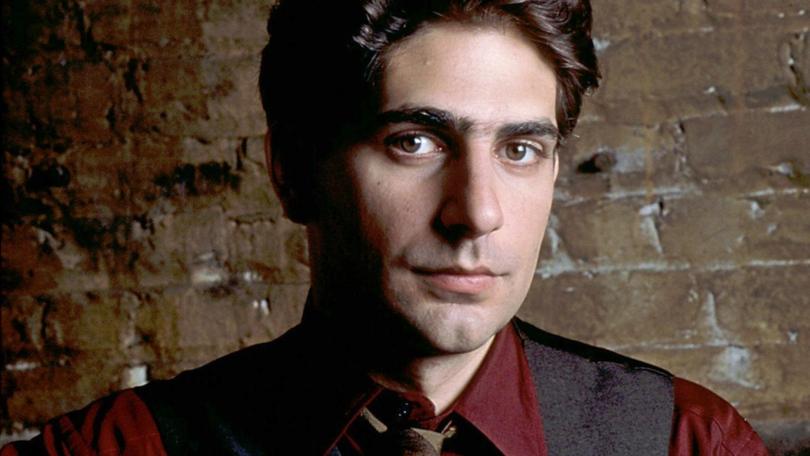 Many actors become inseparable from their characters. This is especially true when it comes to TV actors. For example, James Gandolfini is Tony Soprano, and vice versa. Jon Hamm is Donald Draper. Bryan Cranston is Walter White. These three iconic antiheroes have become the face of prestige television, and the actors who play them will live forever in eternity.

But the actors’ personalities couldn’t be further from their characters’ personas. Gandolfini was a somewhat shy, very generous man. Hamm is a goofball, nothing like the suave ad-man he plays on TV. And Cranston, before he became the most feared drug kingpin in the American Southwest, was better known as Hal, the immature father from Malcom in the Middle. The lesson? Acting is … well … acting.

The one exception might be Michael Imperioli, who played The Sopranos’ Christopher Moltisanti — Tony’s hotheaded young nephew —  for six seasons on HBO. Like the others, Imperioli has become inseparable from his character, but as the series progressed, his character became inseparable from him. Of course, he’s nothing like Christopher in real life, but the line between art and artist at times becomes blurred, as Chris often shares the same dreams and aspirations as the actor who played him.

Imperioli was born on March 26, 1966, into a family of amateur actors. His grandparents came from Italy. His father was a bus driver with a penchant for community theater. His mother was a public-school secretary who pushed her son to follow his dreams. When it came time for Michael to leave for pre-med at the age of 17, he bowed out, and left for the Lee Strasberg Theatre & Film Institute instead. Here he met John Ventimiglia, otherwise known as Artie Bucco on The Sopranos. They quickly became friends and roommates in East Village, NYC.

Imperioli’s personal tastes — the artistic influences that shaped him — are quite a contrast from what we can assume about Christopher. A liberal, vegetarian, avid reader, Zen Buddhist, obsessed with Kerouac, The Smiths and the films of John Cassavetes; he stands in sharp contrast to the aggressive machismo he oozes onscreen. In fact, take a look at his present-day, million-dollar mansion to separate the character from the man — a palatial Santa Barbara home, full of ornate, neoclassical details and expensive artwork. Hardly what you would expect from an organized crime underling.

But it wasn’t always that way. Just like Chris Moltisanti in season one, Imperioli struggled for recognition in the early days. He earned a small role in Martin Scorsese’s Goodfellas as Spider, an unsuspecting waiter who gets shot by Joe Pesci for no reason at all. A scene from “The Legend of Tennessee Moltisanti” — the first Sopranos episode focused on Chris — directly pays homage to this senseless display of violence.

Still, it wasn’t exactly considered a big break, and so Imperioli sought to expand his interests. Following his dreams of being a writer, he earned a screenwriting credit on Spike Lee’s 1999 film, Summer of Sam, which has become something of a cult classic. Yet it wasn’t enough to fulfill his dreams. He also aspired to be a novelist, but just like we’ve seen from Christopher, Imperioli suffered from major writer’s block.

“When I turned 30, I had a stack literally of notebooks and scripts and shit. I would move every year in New York from apartment to apartment and I’d carry all this stuff with me,” said Imperioli in a 2020 interview for GQ. “Finally, I was like, ‘You’re in love with the idea of being a writer, but you don’t really have anything to say.’ I took that whole stack of shit and threw it in the garbage. And somehow that unlocked some weird thing in me.”

At this time, Imperioli finally received his big break, and was cast in the pilot episode of The Sopranos. His character was a movie-obsessed, adrenaline junkie, unsure how to differentiate life in the mob from the fictionalized portrayals he idolized. In the early goings, Chris was always referencing Scorsese and quoting The Godfather, yet too immature to realize they were just films.

When Chris finally matured toward the middle of season two, his character began to incorporate more and more of Imperioli’s actual experiences. “Big Girls Don’t Cry” finds him taking an acting class amidst struggles with his screenplay, conflicted between his life in the mob and his love for the movies. Heartbreakingly, he ends the episode by throwing all his writing materials in the garbage, just like Imperioli had done in real life.

It’s one of the character’s best episodes.

Soon, Imperioli began writing for The Sopranos, becoming the first actor on the show to contribute in front of and behind the camera (Peter Bogdanovich and Steve Buscemi were the others). Overall, he wrote five episodes throughout the course of the series, taking inspiration from his own beliefs and opinions. “From Where to Eternity” is a spooky meditation on death and the afterlife, no doubt inspired by his own interest in Zen Buddhist principles. Christopher will famously say, later in the series, “In my thoughts, I use the technique of positive visualization.” And then there’s the season four episode, fittingly titled “Christopher” (and widely considered to be the series’ worst installment), which is a scathing satire of Italian pride.

“Most Italians, they don’t really give a shit about Columbus,” said Imperioli in the same GQ interview. He was surprised to learn that many of The Sopranos’ latter-day fans are Trump supporters and right-wingers, reflecting the ideologies casually espoused by Tony and his crew. Not that there’s anything wrong with that, of course, but it’s a far cry from what the real Christopher believes in.

As the The Sopranos went on, Imperioli and Moltisanti started to diverge. One was concerned with finding inner peace; the other was a heroin junkie and domestic abuser. In a way, they were both after the same thing. Unfortunately for Chris, he fell victim to his vices. Michael Imperioli, on the other hand, conquered his goals.

Imperioli’s charismatic performance as Christopher has made him one of my personal favorite characters on the series. We want him to succeed, which is why it’s so tragic to watch him fail again and again. The story of Chris Moltisanti provides a meta-narrative on what it means to be a TV character — he’s unable to change, despite being offered several chances to do so. Even after a visit to Hell and several visits to rehab, he always falls back into the same routine, stuck in a never-ending downward spiral, of which his character is too mentally weak to ever get out of.

Chris’ dreams of moviemaking never die — he even gets to produce a horror film called Cleaver in season six — but he ultimately loses the heartfelt passion we see in the first two seasons. That’s why I believe season two is his peak. He still has time to turn his dreams into a reality, and we root for him to break free, but his loyalty to Tony causes him to abandon the life he truly seeks.

In fact, Tony’s influence is the indirect cause for all of Chris’ bad decision-making. Resigned to his circular fate, he sells out his girlfriend to be executed in season five, violently relapses yet again throughout season six and is eventually killed by Tony himself in one of the final chapters. The last, great Moltisanti episode, “Walk Like a Man,” ends with him propping up a downed tree, having just killed his A.A. sponsor in a drunken stupor, his fate essentially sealed.

Thankfully, no such misfortunes have ever befallen Imperioli. He’s his own man — tied neither to Tony nor Christopher. In fact, he quickly moved past The Sopranos once it was over, even though he never found the same kind of success. Yet typical of Imperioli’s open-minded worldview, his success on The Sopranos offered him the chance to do everything else he ever wanted.

In 2009, Imperioli wrote and directed The Hungry Ghosts, a Cassavetes-inspired indie drama starring Sopranos alums Steven Schirripa and Sharon Angela. He then started an alt-rock band. Currently, he has several script ideas and a novel in the works, to go along with his commitments to his wife and three kids.

“I think the danger would have been this: when you’re on a hit, now the next thing has to be a hit, a bigger hit, a bigger part, the leading part, more money,” Imperioli said in 2020. “If you get into that, that’s where you’re dead, because that might not happen … If you’ve built your lifestyle up to a point where you got to maintain some million-dollar income a year, you’re kind of fucked. Because you may not. And then you’re going to be disappointed and you’re going to feel like you’re a failure.”

As a matter of fact, he barely even resembles him.

A Profile of Michael Imperioli