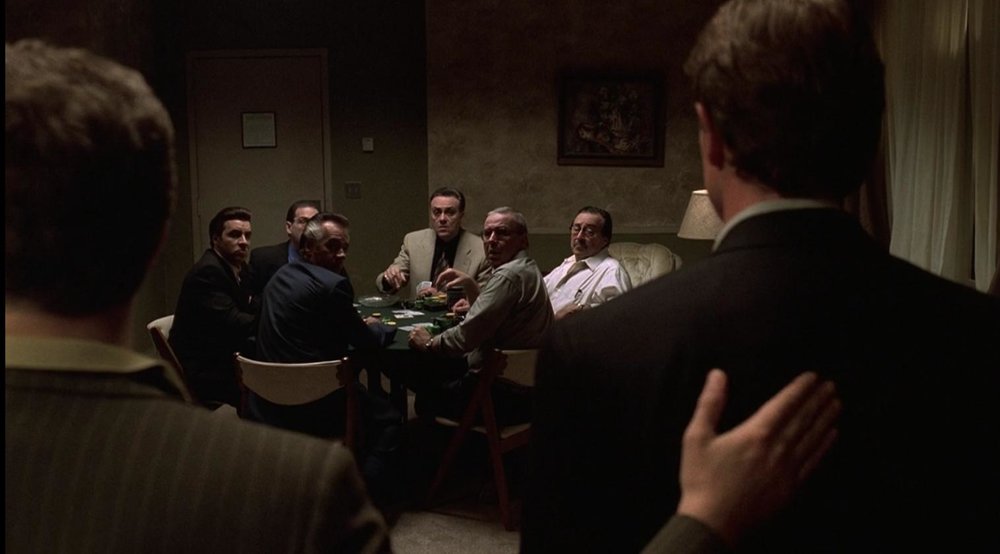 Like many of these season two episodes, “The Happy Wanderer” is slight in the grand scheme of things, but it’s damn good nonetheless. A lot of the episode’s power simply comes from how funny it is. The Sopranos can often double down as both great drama and great comedy, and that rare skill is on full display here.

Tony Soprano has been in an agitated funk all season. The pressures of being boss have coincided with his sister’s return to New Jersey, and I’m sure Richie Aprile’s recent release from prison hasn’t helped. And after finding out that he had a long-dead, mentally-challenged uncle he didn’t know about, well, that’s probably not good for the conscience either.

But in terms of comedy, an agitated and angry Tony is the funniest Tony.

The title refers to the type of person that Tony hates: the happy wanderers, people who walk down the streets without a care in the world. He uses his therapy sessions with Dr. Melfi to blow off some of his long-gestating resentment. The results are highly entertaining.

The passage of time since Tony and Melfi last spoke on good terms has been quite a while (roughly since “Isabella”). I guess that’s why this episode’s therapy scenes seem to crackle with so much life. Also of note: I like how subtly aggressive Melfi has been in their scenes so far, making sure she takes some good jabs at the guy who forced her to go on the lam. It appears she isn’t taking any shit this time around.

But still, Dr. Melfi is there to help. They also discuss Tony’s current situation with Davey Scatino, a high school friend with a severe gambling addiction. Once again, The Sopranos casually slips a new side character into the fold like it’s nothing.

Davey Scatino, expertly portrayed by Robert Patrick, is the ultimate loser. He owns a sporting goods store, and his son is friends with Meadow (the two are slated to sing a duet in an upcoming school concert), but he’s basically Gil from The Simpsons.

Because Davey went to high school with Tony and Artie Bucco, he thinks he can guilt his way into the coveted “Executive Poker Game,” formerly hosted by Tony’s father and Uncle Junior. But it’s called the executive game for a reason — high-rollers only (the guest list includes Johnny Sack, Frank Sinatra, Jr. and Silvio Dante, whom Christopher describes as “a sick fuck when he’s gambling”). The game is seven-card stud, and the bets get big, fast.

Davey wants in the game because it’s in his nature as a down-luck gambler. Tony rejects him because it’s in his nature as a former high school friend. No matter — there are plenty of other ways for Davey to lose money, and he soon finds himself $10,000 in debt to Richie Aprile after playing a “smaller” poker game. The bad news is that Richie’s a sick fuck all the time, gambling notwithstanding.

Nevertheless, Davey still shows up unannounced to the executive game, pleading with Tony to float him five large so he can play. This time, Tony relents — it’s in his nature as a mob boss and a businessman to prey on the weak.

The games can sometimes last for days, and it is early morning when Tony wakes up to find that Davey is 45 boxes of ziti in the hole. To make matters worse, Richie Aprile swings by the hotel, sees Davey at the table and threatens to kill him. The brief scuffle is enough to scare off Frank Sinatra Jr. and a couple of the other players, thus ending the game.

For the moment, Davey is spared, as Tony takes his anger out on Richie. But to make up for the massive debt, Davey is forced to liquify any and all assets. That means giving up his sporting goods business to the mafia, and giving away his son’s new SUV to Meadow as partial payment. So, no, Davey isn’t spared — in the long run, he’s fucked.

Meadow objects to her new “surprise present,” but Tony doesn’t believe he is in the wrong: “A grown man made a wager. He lost. He made another wager. He lost again. End of story.”

For Tony, maybe the best thing for him to do is become a happy wanderer himself. The simple act of not giving a shit might be just what he needs.

Davey’s son, Eric, drops out of the concert with Meadow at the last minute, forcing her to perform alone. In the audience, Carmela is delighted to learn that her daughter can now put a solo recital on her college resumé.

Tony, meanwhile, pays it no mind. As the first performer of the evening sings Franz Schubert’s haunting “Gretchen am Spinnrade,” the soundtrack abruptly smashes to Frankie Yankovic’s polka rendition of “The Happy Wanderer.”

The ending scene is masterful, and hilarious, because of the fact that the song is heard before the end credits even appear. It’s completely disorienting: Tony watches the blonde soprano singing onstage, but his mind is completely empty. He’s basically Homer Simpson with the image of the clapping monkey in his head — Homer Simpson, of course, being the happiest wanderer of all.

The Sopranos S2E6: “The Happy Wanderer”

2 thoughts on “The Sopranos S2E6: “The Happy Wanderer””