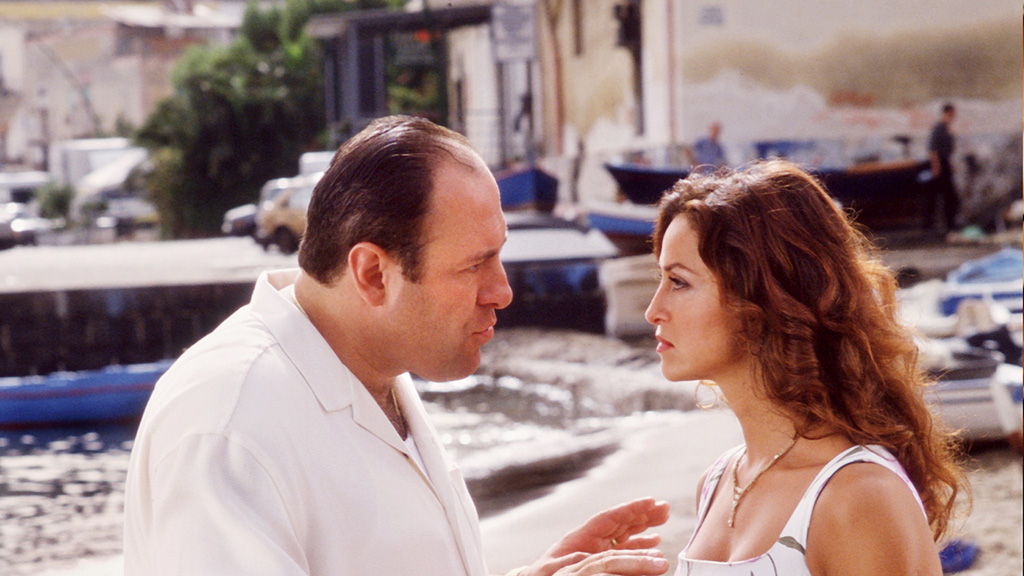 Commendatori: “The Sopranos Goes to Italy”

Commendatori” is an episode that is a little worse than I remembered. Once again, this is The Sopranos we’re talking about, so I’m speaking relatively here — “worse” and “bad” aren’t to be taken at face value. Yet this being The Sopranos, a certain level of excellence is still required, or rather, expected.

When I first watched the series, I had originally ranked this episode as a masterpiece. On rewatch, however, it’ll have to settle for being merely “very good.” And that ain’t half bad.

“Commendatori” puts the main plot of season two on hold as Tony and the gang travel to Italy for business. Some other possible ire towards this episode: the main plot (action, in other words) has basically been on hold ever since the season one finale. There has been plenty of tonal table-setting to start this sophomore season, but the burn has been slow — a one-off trip to Italy isn’t necessarily going to lurch the plot forward.

Early in the episode, Tony Soprano nostalgically remarks that his favorite scene in The Godfather Part II is when Vito Corleone returns to Sicily. There is plenty of nostalgia associated with “Commendatori,” being that the characters are about to embark on a pilgrimage to the Mafioso Mecca. Tony remains reserved about the trip, while Carmela feels slighted that she can’t come along. Uncle Junior, who is now under house arrest, reflects on how he will never end up going. The very idea of Italy is sacred to these characters.

When Tony, Chris and Paulie get to Naples, there is a big focus on the new setting. This is location shooting, after all, dip into that budget and treat yourself. Thankfully, director Tim Van Patten never overwhelms us with stylish culture-montage or exotic clichés. He keeps the episode within The Sopranos’ natural, slow-burn aesthetic despite the fact that it takes place 1,000 miles from home. As Tony explained back in Jersey, it’s just a business trip.

And while conducting business, they quickly find out that Italy is far different than what they expected. For one, Don Vittorio, the boss of the Naples family, is senile and handicapped, thus making his daughter, a young woman named Annalisa, the de facto leader. The matriarchal structure makes Tony uncomfortable.

Furthermore, the Italian soldiers are far more unforgiving than their American counterparts. Case in point: a young boy sets off firecrackers without warning, and Furio Giunta, who originally seemed pretty friendly, mercilessly beats the boy in the middle of the street. Tony and Paulie watch in awe.

The business affairs involving Tony and Annalisa aren’t all that important, the main takeaway being that Furio will be sent to Jersey as part of a deal involving luxury cars, but the sexual tension between the two bosses makes the scenes worthwhile. Annalisa reminds Tony of Dr. Melfi, what with her psychological quips and probing questions. In turn, she bears a striking resemblance to Isabella, the girl from Tony’s fever dream in season one. In the episode’s finest scene, Tony and Annalisa walk amidst ancient ruins, talking about the Oracle of Delphi, a surreal atmosphere pervading the air.

Back in Jersey, we get a storyline involving the housewives, which is handled surprisingly well for how boring it sounds. The plot mainly focuses on Angie Bonpensiero’s existential crisis in the wake of Big Pussy’s cruelty and neglect. She contemplates suicide and pursues divorce, which is unfairly criticized by the hypocritical Carmela.

Of course, Carmela only fears that these things might someday happen to her. As a guilty Catholic, she wonders if Tony will one day treat her the same way Pussy treats Angie. When Tony returns home from Italy, she sits in the bedroom with a concerning look in her eyes, dejected as she hears “I’m home” booming from downstairs.

In the end, Tony is glad to leave Naples, the Jersey factories along the freeway far more welcoming than the coastal towns on the Mediterranean. Paulie, too, is glad to be back home, yet unable to admit that the Italian culture disappointed him at every turn. Chris, meanwhile, spent the entire trip in his hotel room, indulging in a heroin stupor with local prostitutes and junkies. He never gets to see the volcano he was originally so adamant about, and he doesn’t buy Adriana a souvenir until he’s at the airport gift shop in Jersey (on the return flight, nonetheless). The idyllic illusion of Italy has been shattered.

As an episode, “Commendatori” is only a blip in season two’s overall hierarchy, yet it’s still a respectable one-off. The overall entertainment value may be lacking, but it’s never a bad idea to slow things down and develop the characters in an unfamiliar setting.

One thought on “The Sopranos S2E4: “Commendatori””