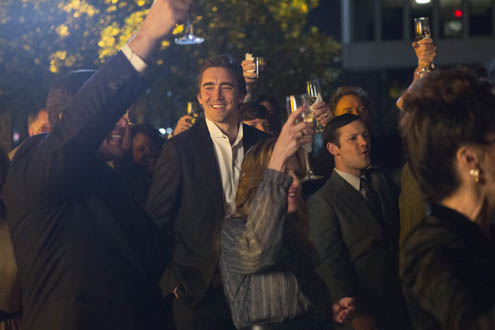 An uncertain future can only mean good

For the most part, Halt and Catch Fire season one has been decent at best.  It’s wandered around, unsure of what it wants to be, weighed down by a lead character who has just been a monkey’s ass the entire time.  The show finally found its footing in episode eight— “The 214s”—but had apparently lost it just as quick when the next episode rolled along.  I am glad to report that the season one finale, titled “1984” (nothing Orwellian about it, it refers to the year), has done a good deal in restoring my faith in the show.

It’s the kind of episode that makes the preceding one look a little better in hindsight.  “Up Helly Aa” wasn’t bad, it was just disappointing.  It suffered from the same pitfalls that had plagued the show from the start—forced plots, bad characterizations, Joe MacMillan, etc.—which was especially dour since “The 214s” had suggested that a confident, more assured show was on its way.

That promise is fulfilled in “1984”.  One thing “Up Helly Aa” did accomplish, however sloppily, was plot development—getting from point A to point B.  While the outcome of “Up Helly Aa” feels like a slap in the face for even trusting this show in the first place, it does provide Halt and Catch Fire with the chance to begin again.  On to the next one, as Jigga man would say.

Only this doesn’t look like a rebuild, it looks like a full-on reboot.  Strip everything and start over.  That’s what “1984” appears to point to, at least.  If the finale had suggested that the characters would regroup to build a bigger, better Cardiff Giant, I would have hopped off the wagon.  Season two as a slight variation of season one does not sound worth my time.  What a relief, then, that this episode has its main characters all going separate ways, which is ironic since one of Halt S1’s biggest problems was the fact that the main characters weren’t together enough.

The show hasn’t rebooted yet, but “1984” does a great job of getting us there.  The office dynamics between Joe and Gordon in the first half of the episode are surprisingly enjoyable, perhaps because there’s a sense of change in the air.  For starters, Cameron doesn’t work there anymore.  And Gordon’s starting to grow some balls.  ‘Bout time, sonny.  Joe’s being phased out too, thank God.

The real surprise of this episode, though, is Donna.  She has been a witch’s tit through and through up to this point, a dangerous cross between Betty Draper and Skyler White—at times more unbearable than Joe.  But this episode has Donna transform into an independent and nuanced character right before our eyes.  The trigger that caused it?  She smokes some weed.

There are still some questionable sequences, but far fewer than the typical Halt and Catch Fire episode.  Joe’s burning of the first shipment of Giants is a little more problematic than symbolic when you look at it its real-life implications (it would be arson).  Also, the scene where Gordon and Donna are carjacked has the random logic of Grand Theft Auto thrill ride.

You can usually tell when a show has reached a turning point, a dramatic shakeup of the chess board.  Mad Men is the show that Halt rips off the most, so I think it’s fair to say that “1984” is Halt’s “Shut the Door, Have a Seat” moment.  Obviously, it’s nowhere near the level of that all-time classic, but these two are similar in spirit.  There’s a new day rising.

Gordon ends season one well on his way to becoming his own boss, still under psychological duress but now sporting a clean shave.

Cameron—in what is potentially the show’s best move going forward—creates her own startup company called Mutiny, echoing Bosworth’s words by embracing the future, while stealing all of Cardiff’s programmers in the process.

Donna continues her newfound independent streak and, after finally injecting some humor into her character, joins Mutiny with Cameron.

And Joe MacMillan, in the season’s final scene, seems wont to abandon the material world and so he marches into the woods.  Perhaps it’s to find inspiration from the unknown and he will later emerge in season two with new ambitions to peddle.  It’s a poignant season-ender, but hey, I hope that he never returns from those woods.

As for the rest of ‘em?  It’s comeback season (two).  I didn’t think this finale would do it, but I’ll admit, I’m interested to see how the next season goes—or at least how it starts off.